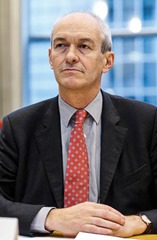 Richard Corbett defends the UK’s place in the EU.

Despite the shrill anti-European rhetoric from some politicians and much of our media, we are better off being part of the European Union. Why? For three groups of reasons: idealistic, pragmatic, and selfish.

The idealistic reason is simple. The EU has helped create and maintain an area of peace and stability in a continent that was ravaged by war for centuries. We have enjoyed this peace for three-quarters of a century, so it is often taken for granted. It shouldn’t be. The 100th anniversary of the First World War should remind us that is far better to have our arguments over a negotiating table.

The pragmatic reason for the EU is even easier to see. Whether we like it or not, we and our neighbours are

highly interdependent, economically, environmentally and in other ways. Many of the challenges we face are bigger than any of us can overcome alone. So, in many areas, we need to find common solutions to common problems. The EU is our local neighbourhood committee: it enables us to work together where we share common interests.

Finally, there is the selfish reason. The EU is the biggest free market in the world, and it’s vital for our jobs. The majority of our exports go to our neighbours: by way of illustration, every year we export more to Holland alone than we do to the entire Commonwealth, more to Sweden than to China.

A common market needs common rules to provide for fairness, equal opportunities, environmental protection and consumer protection — not an unregulated free-for-all, dominated by powerful market interests. Indeed, most EU rules are designed to make the market work the way we want. Although euro-sceptics love to complain about ‘red tape from Brussels’, in fact many of the rules we agree with our neighbours are designed to make life easier for business, cutting red tape and bureaucracy. This is done by adopting common standards and rules so that businesses face a single set, rather than 28 different ones. For instance, it’s now possible for a business to register a trademark once, valid across Europe, instead of facing 28 different registration procedures, each with their own forms and fees. No wonder businesses are so vocal about the benefits of our EU membership. The CBI reckons it’s worth £3,000 a year to every family in the UK.

Other EU laws are there to protect people. For instance, having a common system across Europe for labelling foodstuffs – the famous ‘e-numbers’ on our jars and packets – enables people with allergies to see easily what to avoid. Europe-wide laws to protect the environment are more effective than separate national policies, as pollution doesn’t stop at boundaries. And a common competition policy has protected consumers from national monopolies and multi-national companies alike. This is perhaps most visible in the airline market, where cheaper flights have enabled millions to enjoy European travel.

The EU is not perfect. Of course it sometimes gets things wrong. Like local government and national government, mistakes can be made, and when this happens, they must be rectified. The Common Agricultural Policy is an example of a policy being reformed. Until recently, it accounted for 70 per cent of the EU budget — now it’s due to fall to

27 per cent by the end of the decade. The ‘butter mountain’ and the ‘beef mountain’ are distant memories. Export subsidies are going.

A British exit from the EU would damage our economy to the extent that some have called it economic suicide. It would hurt our political influence in the world. And it would make the Northern Ireland border a ‘hard’ border, with customs controls and tariffs, as it would become the external border of the EU. We have achieved much through playing a constructive role at the heart of the EU. The only way we can continue to fight for the reforms we want is by continuing to do so.