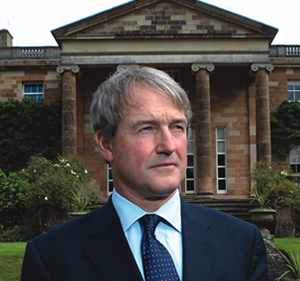 Secretary of State Owen Paterson wants to see devolution settle down and the private sector grow, but says Northern Ireland must be part of the “team effort” to cut the deficit. Peter Cheney reports.

Having settled quickly into his post, Owen Paterson is keen to see Northern Ireland and the UK Government working together as a “team” but is adamant that the deficit must be immediately tackled to restore the economy.

“I met people from right across Northern Ireland, right across the community, in every sort of activity,” he recalls from his time in opposition, “but I couldn’t actually do anything. Now, it’s rather different.” His main priority now is being “the link both ways” between Northern Ireland and the UK Government.

“We said consistently when we were in opposition that we want to see devolution work. We want to see the institutions that have been set up moving forward, working well, but also I think it’s very important that Northern Ireland is represented at the highest level in the British Cabinet.”

Meeting with political leaders in Dublin and Washington is also important to him, as Northern Ireland “wouldn’t have got to where we are” without the help of the political establishments in both places.

Paterson also considers himself lucky to be taking office at this point, with the “huge struggle” of setting up devolution out of the way. He is free to focus on the long-term.

“It won’t be us imposing from Westminster but we’re working with local politicians and local ministers. The two obvious priorities are the economy and long-term social problems, but that is very much a team effort.” 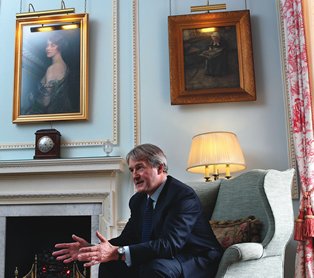 Northern Ireland, though, only makes up 2.3 per cent of the UK’s economy and 2.9 per cent of its population. In light of that, he was asked how much influence he had within the Cabinet.

“Well, we’re lucky to have a Prime Minister who’s always taken a great interest in Northern Ireland,” he replies. David Cameron visited the province privately and publicly in opposition and also received regular reports from Paterson about the situation on the ground.

“He always took a real interest, read them in great detail, wrote comments on them, so I have a direct line to him which is, I think, really important to Northern Ireland.” Cameron’s interest in the province, he finds, comes from his belief in the union and making sure it works well.

Across the North Channel, devolution in Scotland is due to change as the coalition puts the Calman Commission’s proposals into practice, including regular appearances by the Scottish Secretary before the Scottish Parliament and allowing the House of Commons to debate devolved matters.

Paterson is “freely available” if the Assembly would like a similar meeting. No-one, though, has raised debating devolved matters in Parliament.

“Don’t forget that devolution here is pretty fresh. It’s only been up three years since the beginning and we’ve only got the final stage through in April, so I think it’s early days to start talking about discussing the issue back in Westminster,” he says.

“My feeling is we want to make devolution work and that means respecting the position of local politicians, and letting them debate it and come to their own decisions and resolutions here.”

The deficit, in his words, is the last government’s “appalling inheritance”, leaving the UK with “grotesque” economic problems. Labour, though, contends that cuts should be delayed until next year so the economy can properly recover.

“It’s like putting off cancer treatment,” he responds. When it is put to him that that is a stark comparison to make, he goes on to describe a worst case scenario.

“We cannot go on spending money we haven’t got. We are borrowing £300,000 a minute. If we go on like that, there’ll be a certain point when we can’t pay the interest on the national credit card and we’ve seen what happens in Greece.

“When that happens, pretty dramatic things happen in an uncontrolled manner. So people lose their jobs in a pretty erratic manner. International institutions come in and make brutal, dramatic decisions which we can’t control.”

After meetings with devolved ministers, he thinks “everybody realises the dire position we’re in” and says Labour’s approach would be the “worst possible action”.

The coalition has pledged to produce a Treasury paper “examining potential mechanisms for changing the corporation tax rate in Northern Ireland.”

Looking back to 2007, he says the first Varney review wrongly saw this as a ‘hit’ to the Treasury. Varney’s report claimed that annual tax receipts would fall by £278 million. The Azores judgement, in his understanding, allows a devolved assembly to vary tax, provided it bore the cost of a reduced tax take. 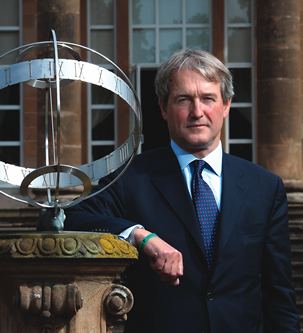 “There are some brilliant businesses here, some absolutely top-class world businesses and you’ve got opportunities like [Project] Kelvin coming in which will give further opportunities to private sector,” he continues. “The problem is there just aren’t enough of them.”

Public spending’s 74 per cent share of GDP and the £9 billion subsidy are both “unsustainable” but doing nothing and acting too quickly are both “irresponsible” courses to take. Instead, his alternative is a steady 25-year rebalancing of the economy.

Turning to the Treasury, he says it needs to get the message that “huge gains” can be made by getting people into work in a growing local private sector.

At present, 24 per cent of the province’s households claim incapacity or disability benefits, the highest rate in the UK. The extra cost of Northern Ireland’s benefit claims, over and above the UK average, was £1.1 billion in 2008-2009.

Paterson has two figures in mind for savings: £75 million could be saved if the incapacity benefit and jobseeker’s allowance rates were brought down to the UK average (16 per cent), and nearly £150 million if incapacity benefit levels alone matched the lowest regional level, London’s 10 per cent.

And, at a political level, disaffected young people could be brought into employment rather than tempted to join paramilitary groups.

“There are huge benefits here, of getting the private sector going. It’s not just a question of reducing the deficit but it would just transform society, particularly in our hardest hit areas where things have been really tough in [recent] decades as we know.”

Paterson sits on the right of the Conservative Party but works well with the Liberal Democrats in government. As an example, he gave an insight into the coalition Cabinet’s Home Affairs Committee, which is chaired by Nick Clegg and oversees domestic policy.

“There is extraordinary agreement. It’s impossible to exaggerate how interesting those meetings are and how well we all get on, and what a level of agreement [there] is on the destination to which we’re going,” he comments. “Now we may disagree on the details and we have some very interesting debates but it’s impossible to exaggerate the commitment on all these issues.”

He had not realised this common ground when in opposition for 13 years, and recalls that he had only briefly talked to Danny Alexander before, about sub-post offices. “Several years’ work” in government lies ahead.

The future of the Conservative and Unionist pact, meanwhile, will depend on the UUP leadership election result, due on 22 September. As the next election is five years away, “we’ve got plenty of time to decide what our next steps are.” Ulster Unionists, he said, had no special access to him as Secretary of State.