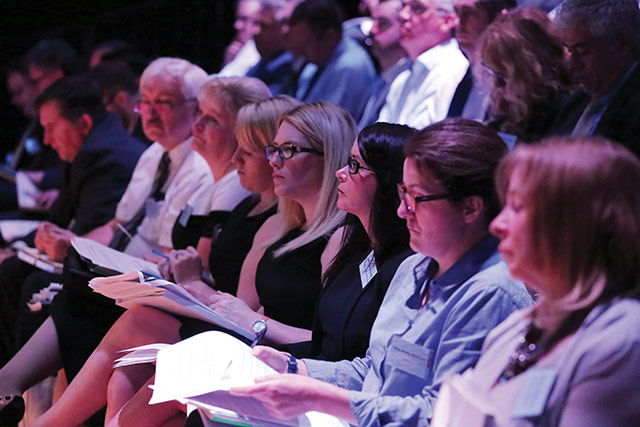 The prevailing tone set by guest speakers at agendaNi’s Brexit conference is primarily one of apprehension amidst the climate of post-referendum uncertainty.

Virtually every speaker, from across a range of industry sectors, is keen to advocate careful preparedness ahead of the unfolding negotiations triggered by the Brexit referendum result.

Opening proceedings, Dagmar Schiek, a professor of law at Queen’s University, critiques what she describes as an EU fascination with the UK and suggests that it is time for Europe to recalibrate its priorities. “I think that being fixated on the UK is a danger for the EU in this situation. So I would suggest that it’s time for the European Union to regain the initiative,” she states. Likewise, she proposes that now is the time for the EU to recognise the UK referendum result as a wake-up call.

In a theme which becomes a common thread of discussion, Schiek also asserts: “I think an option should be found to find a special solution for Northern Ireland. Which maintains the options of free cross-border travel and also the interlinkage of the economy.”

Adding to the debate, Director of the Centre for Cross Border Studies, Ruth Taillon stresses that the impact of cross-border cooperation goes well beyond the sizeable border corridor. As such, the subsequent impact of post-Brexit fallout has the potential to stimulate increased deprivation and alienation, as was the case after the 2007-08 financial crises.

Any continuation of cross-border cooperation, Taillon warns, will require both political and economic commitments. “It’s worth remembering, I think, that a lot of the problems of the border region, whether or not directly attributable or exacerbated by the conflict, or were simply problems faced by lots of other border regions in terms of geographic peripherality or economic underdevelopment, do not respect jurisdictional boundaries.”

Post-referendum, she maintains: “We need to continually press that the cross-border cooperation which is embedded in the Good Friday Agreement remains a priority for both governments and it can’t just be lip-service and glib reassurances. That means that the soft infrastructure, not just the GFA bodies, but also all the links at departmental and local government level and civil society networks, need to be nurtured and maintained.”

Jackie Henry, chair of the CBI Northern Ireland Public Services Reform Network, opens her comments with a simple caveat: “Business dislikes uncertainty.” All eyes, she adds, are now on Chancellor of the Exchequer Philip Hammond’s Autumn Statement due to be delivered on 23 November.

“What was clear with our business members was that they would like to maintain, or replicate really, as many advantages of EU membership that are currently in place as possible, but also recognise that we are in a different political environment of a Brexit.”

Henry warns: “Overall, whatever the final outcome, we in CBI expect that the likely economic impact of Brexit will be disproportionately worse for Northern Ireland. A good piece of analysis completed by Oxford Economics back in March of this calendar year, commissioned by DETI, made clear those points in a number of modelling scenarios.”

Going forward, she argues: “We really need an economic strategy which is not a simple tick-box exercise, but really sets out a very clear and agreed platform on which to secure growth, protect business and economic development here in Northern Ireland.”

Speaking from an agri-food perspective, Chair of Northern Ireland Food and Drink Association, Declan Billington, urges that “negotiators need to understand the problem” and suggests that now is the time to “move from high level principles, to the meat of the issue”. Highlighting the unique significance of the sector as an exporting business present in every town and village, he outlines: “We sell £4.6 billion. Of that, about £3.5 billion goes out of Northern Ireland. So we earn £3.5 billion out of this industry. That money comes into our economy, is spent in our shops, puts wages in people’s pockets. That’s what is at risk if we get our trade deals wrong.”

Stressing the importance of these trade deals Billington summarises: “The UK currently has one trade negotiator. We have a deal with Europe. Europe [represents] 53 other trade deals that we exit the moment that we leave the EU. So there’s 53 trade deals we need to put in place just to stand still and we have one negotiator.”

An additional, but no less pressing challenge raised by Billington is the question of trading into Europe’s huge trade wall. “Within that trade wall they were able to implement social policies which raised costs. But it didn’t matter because competition from outside the trade wall couldn’t get in because of the tariffs. Therefore, policy about living wage was not undermined by the wages paid in Brazil. We’re about to leave that trade wall and there are significant consequences to the social policy we can deliver from a trade wall that allowed the tide inside to rise.”

Seamus McAleavey, Chief Executive of NICVA, criticises a prevalent naivety that the UK will be able to secure a one-way deal as being completely unrealistic. The reality, he argues, is that we are likely to see our recession extended.

“The big issue for us, in our sector, we were thinking about the likely impact on the economy and on economic development and in our view it was better being in. The danger for us now is that everyone outside, with regards to foreign direct investment and alike, start to think about where we are going to be. The outside world has no idea where the UK or Northern Ireland are going to land.”

“In terms of public expenditure, there will definitely be more pressures and these are going to go on the Northern Ireland Executive. If we lose millions or hundreds of millions in European structural funds and we have to take up the slack, that means we can’t spend money on other things. It is as simple and straightforward as that.”

Seamus Leheny of the Freight Transport Association emphasises: “EU work was simple. It was the same for me to transport goods to Rotterdam or Berlin as it was to move to goods to Dublin or Newry, it was that straightforward. However, it becomes a lot more complex the moment freight steps outside of the EU there’s a lot more red-tape and administration burdens.”

During negotiations, Leheny contends: “We have got to prioritise our trade deals while also ensuring that we have the capability to access and service the key markets. There’s no point in us having great trade deals with the US while not having the means to get the goods there. Our borders must enable the efficient movement of goods.”

Colette FitzGerald, the eyes, ears and voice of the EU Commission in Northern Ireland expresses the regret of the remaining 27 EU member states and argues that the media depiction of a vengeful EU out to punish the UK needs to cease. However, as is often the case in any relationship breakdown, life goes on for the rest of EU which currently face a series of urgent issues.

FitzGerald is unambiguous about future negotiations. These will happen at member state level. Northern Ireland, Scotland and Wales will not be at the negotiating table. It is vital therefore, she insists, that these voices are heard in Downing Street in the preceding months.

On the issue of the border, Fitzgerald is equally unequivocal about the Commission’s position. Dublin and London, she argues, will not be able to negotiate a unilateral agreement. The status of a border on the island of Ireland must be voted on in the EU parliament as a constituent part of the full negotiation package.

“We have heard a lot about the Common Travel Area that existed before the UK and Ireland joined the EU. The Common Travel Area ceased to exist when they joined the EU and for anyone to speak about resurrecting it as it existed is completely wrong. It will no longer be a border between the UK and Ireland, it will be a border between the UK and the EU. Quite simply it is an international border and this is not a decision that can be taken by London and Dublin alone. This is a decision for the 27 member states and ultimately the EU parliament.”

One alternative voice raised is that of Brian Ambrose, CEO of Belfast City Airport, whom Chairman Mark Carruthers describes as “an unrelenting optimist”. Ambrose suggests that impact very much depends on sector. While conceding that uncertainty is enemy number one, he highlights that the combination of a currency slump and the relative safety of Ireland as a European holiday destination represents an opportunity to actually invigorate tourist numbers. “We’re pretty confident 2016 will beat [2015] and Northern Ireland and the island of Ireland will have a record year. The current environment is extremely positive.”