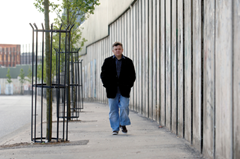 The Guardian’s Ireland Correspondent, Henry McDonald, assesses Northern Ireland’s prospects. A disillusioned generation is growing up but the Titanic centenary promises to boost tourism and unites the province’s political leaders.

Two journeys in two different locations in Belfast, each one transmitting a different message about not only the city but also the entire future of Northern Ireland.

The first is an amble down Royal Avenue in the third Sunday afternoon of September with two young children in tow. After escaping the throng inside St George’s Market, we decided to take a walk around the city centre and ended up on the main thoroughfare.

As someone whose working life spans the border and who now sees his native Belfast from a different perspective than before, what struck me was how many empty premises and charity shops were now on the central shopping drag. Although Belfast City Council has done an admirable job sprucing it up, Royal Avenue looks tatty, a little depressed and showing all the indicators of ongoing recession. Alongside the empty apartments along the River Lagan, these are warning signs that the local economy has not recovered from the credit crunch, the banking collapse and the shattering of business and consumer confidence.

And yet take another walk along either bank of the Lagan, as we did on the same day, and you see another symbol of hope and possible regeneration rising up on Belfast Lough: the Titanic Quarter. What was striking was not only the aesthetic geometry of the gleaming visitors’ centre but the number of foreign tourists taking snaps of the Titanic memorial building eight months or so before it opens in time for the 100th anniversary of the tragedy.

Moreover, while we were there, on the other side of the river a huge luxury cruise-liner was visible in the harbour, more proof that Belfast is becoming a more attractive tourist venue for international visitors. Observing the coaches ferrying the voyagers from where the liner was berthed into the city centre, I wondered what it will be like when the Titanic Quarter’s cornerstone project is up and running in 2012, and how many more visitors will come and spend money in the city.

These two journeys made in one pleasant early autumn afternoon highlighted the contradictions within the Northern Irish economy at present.

In terms of consumption, the local populace have very little disposable income to spend in the temples of commerce that sprung up in Belfast and other major population centres during what we now realise was credit-fuelled fake boom. Smaller enterprises such as pubs and cafés that rely so much on consumers having spare cash to spend beyond the staples of life have suffered most in this downturn.

Witness the depressed state of the pub trade for instance and the “ghost town” atmosphere even in some of the city’s most treasured watering holes in recent times. As consumers and households trim back their spending and banks (many of them bailed out by tax-payers on both sides of the Irish Sea) continue to crucify them that part of the economy reliant on consumption looks as if it will remain in the doldrums for the foreseeable future.

If this column appears overtly obsessed with the economy then read on. Because what happens on the economic front will have malign social consequences across Northern Ireland.

During a recent visit to Derry I was struck by how the centre of the province’s second city looked equally depressed, arguably even more, than central Belfast.

There too there were legions of boarded up businesses around the central shopping zone. Given that certain wards in Derry have traditionally suffered for being the most economically deprived in Northern Ireland, it dawned on me that it was hardly surprising that those forces within extreme republicanism are harvesting recruits from a section of society alienated politically and socially from the power-sharing polity at Stormont. As unemployment, particularly among youth, climbs this well of the disaffected is bound to deepen and spread. Global economics will also continue to impact on the current constitutional status of Northern Ireland. The euro crisis has doomed possibly forever any remote chance that the UK would join the single currency. Indeed, the single currency may cease to exist in its present form if the crisis worsens now that one of the eurozone’s larger economies, Italy, looks vulnerable. In that context, for the long term there are going to be two radically different currencies extant on this island.

As long as the North remains in sterling, the chances of economic fusion on an all- Ireland basis look unrealisable. Leaving aside continued unionist opposition to breaking the union, the lack of a common currency will undermine the case for Belfast shifting its economic reliance from London to Dublin.

On the one front where there is a common view that we follow Dublin rather than London (the corporation tax rate) the picture remains unclear. The Republic’s high-tech export sector, comprised in the main of multi-nationals, continues to grow and prosper while other parts of the southern economy remain mired in recession. A corporation tax on parity with the Republic’s might just attract some multi-nationals who can create wealth-generating jobs for the future.

But for now that prospect seems a long way off.

Despite this gloomy prognosis there is no prospect at least of the power-sharing executive being in any danger. The evidence of its durability can been seen in the fact that unionism has been relatively relaxed (except for discordant voices) about Martin McGuinness departing from the deputy First Minister’s post in Belfast to challenge for the Irish presidency in the South.

Regardless of rising dole queues and the pin-prick paramilitarism of the republican dissidents, thus far these politicians need each other. They sink or they swim together. And their promotion of a signature tourism project based around a doomed cruise liner that disappeared in the icy waters of the Atlantic a century ago is proof positive that only by sticking with one and other can they remain afloat.