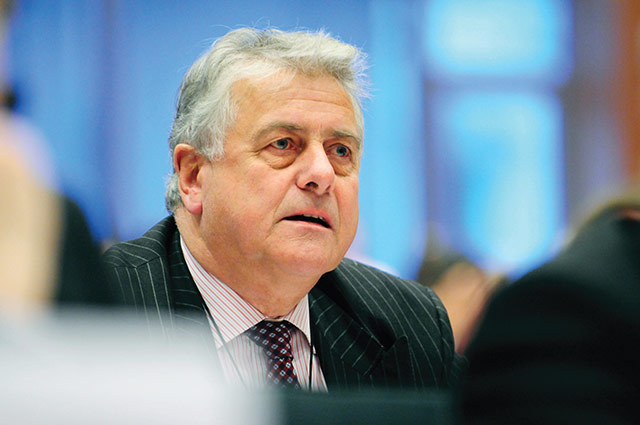 As Northern Ireland struggles to offer a coherent and unified contribution to the Brexit negotiations in the absence of an Executive, Dave Whelan talks to MEP Jim Nicholson about his role in bringing Northern Ireland’s precarious position to the attention of both Brussels and Westminster.

By his own admission, the official triggering of Article 50 by Theresa May essentially handed long-serving MEP Jim Nicholson a pre-dated P45 for 2019, the date of the next European Parliament election. Despite advocating for the UK to remain in Europe prior to the referendum, Nicholson is hopeful that the triggering will now provide some much-needed clarity on the details of the exit process and plans to draw on almost 30 years’ experience in Brussels to ensure the best outcome for Northern Ireland.

However, while he accepts Northern Ireland faces an “uphill task”, the member of the EU Agriculture Committee has ruled out any form of special status to protect Northern Ireland’s economic interests as a region, instead putting his trust in the UK, as a whole, negotiating favourable terms.

“I think talk of a special status is a total waste of time and I believe the vast majority of people in Brussels see that. Europe doesn’t do regions, Europe does nation states,” says Nicholson. “These negotiations are going to be carried out by London and my focus has been getting it through to London’s ministers coming over to Brussels the importance of recognising Northern Ireland as the only part of the UK that is going to have a land frontier. However, anyone who believes that Northern Ireland will be negotiating is living in cloud cuckoo land. It’s going to be done by the UK Government on behalf of all the people of the UK.

“If we can get a good deal on how the UK and the EU trades then that takes the whole idea of special status away. The UK has to have, and wants to have in my opinion, good relations with the EU for the future and a large part of that will centre on how we trade. If they can resolve the whole area of agri-food and have it tariff-free, we resolve a lot of the problems Northern Ireland would face.”

Nicholson believes that, aside from some provisional organising, negotiations of any substance between the UK and Europe will not take place until at least September, following the outcome of the German national election. However, he states that the shape of these early negotiations will be crucial to the shape of the final outcome.

“We will get an idea as to what the body language between the UK and Europe is and if we get a good constructive dialogue on how we are going to move forward or the operation of the UK exit, then I think that’s for the greater good of everyone. However, if we end up with a situation whereby both sides are going to walk away from the table, then we revert to World Trade Organisation rules. From our point of view this would be a total and absolute disaster.”

Despite some optimism that negotiations will be smoother than first expected, largely based on the tone of Theresa May’s letter to the EU Parliament, which Nicholson confirms was better received than her speech in January, opposing stances have already started to emerge. Theresa May’s hopes that Britain’s exit and future trade deals with the EU could be negotiated in tandem have been rebuffed by Europe, which is seeking separate negotiation periods.

However, as Nicholson explains, the general picture is ever evolving: “Even as we sit here today the scenario is changing and what we are dealing with is largely speculation. I think we will have a better reading by the autumn. If there is good will that we could get negotiations on the withdrawal and the negotiations of what the trade deal would be, side by side, then we could be in a much better and advantageous position than we are today. It’s in everyone’s best interest to have a good agreement and waiting until the end of the allocated timeframe to start doing trade deals, deals which are highly technical and can’t be rushed, will not be beneficial for either party.”

As well as liaising with the UK negotiating ministers and the EU, Nicholson says that the European Conservatives and Reformists (ECR) have also been proactive in their approach. One avenue he states there has been provisional work on is exploring the possibility of a new customs union between the UK and Europe.

Nicholson is clear that without an operating Executive, Northern Ireland will be “disproportionately disenfranchised” in any negotiation outcomes. “We are in the worst position of any region in the UK because we do not have any Executive. Neither Scotland, Wales or Northern Ireland is going to be at the negotiating table but they will at least have a chance to meet with the Prime Minister to find out what way the negotiations are going and to remind negotiating ministers about their priorities. I have stressed our situation to David Davis and the Northern Ireland officials are very active, but a lack of political clout is placing us in a place of extreme weakness.”

Acknowledging that the agri-food economy has largely become dependent on all-island cooperation and trade, Nicholson describes the scenario of a hard border as a “nightmare scenario”. He says: “The vast majority of people do not want to go back to seeing a hard border in place and there are further investigations to look at places like the port of Antwerp, to see what technology is available, and the border between Sweden and Norway, to see how compatible their model is. However, right now that’s all speculation. There is no easy solution looking at us as we sit here today but a solution has got to be found.”

Asked whether he thought the pending scenario made Irish unity a more likely outcome, he responds: “Although I was in favour of remaining in the EU, do not think for one moment that I or any other unionist would now, as a stop gap measure, consider a united Ireland because of this scenario.

“I think the EU gets that and I have made it very clear that I want the integrity of the UK and Northern Ireland’s position within the UK to be maintained. I want my children to be part of the UK and want good relations with my Southern neighbours. I will do all in my part to continue to have that but I am not giving up my position as a unionist. That is one thing that is non-negotiable.”

Turning his attentions closer to home Nicholson states that he will not be left wanting for something to do once he is no longer required to serve as an MEP, but has not given what form that will take. Despite a poor Assembly seat return for the UUP in the latest election, a result which saw a gain in the number of first preference votes not reflected in their share of seats, he is optimistic about the future of the party moving forward. He personally didn’t share the view of former party Leader Mike Nesbitt around transferring votes from the unionist party to the nationalist SDLP, a statement that has now been largely attributed to Nesbitt’s downfall, but does see a crucial role for opposition to exist in any future government.

Although very well-respected within the party, Nicholson declares himself “not of the right vintage” to contemplate party leadership but is instead looking forward to working with incoming leader Robin Swann.