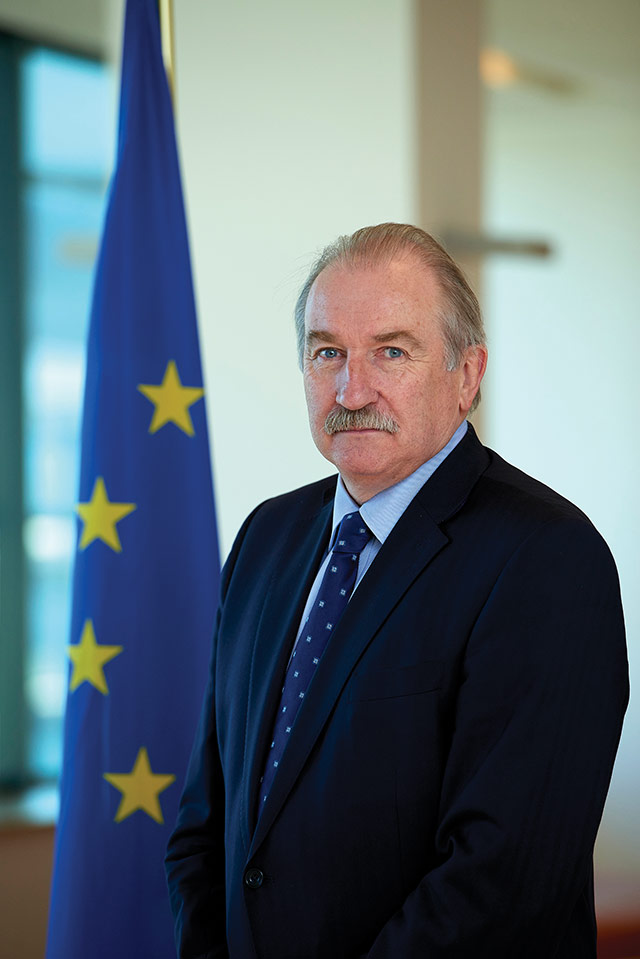 The short-term uncertainty surrounding Brexit will be heavily damaging to the UK economy. Having been one of the key drivers in facilitating a devolved level of corporation tax for Northern Ireland, Michael Smyth tells agendaNi that he believes it is no longer viable in its current form and expands on the wider economic impact.

As Vice-President of the European Economic and Social Committee (EESC), an EU advisory body to the European Commission, the Council of the EU and the European Parliament, former Head of Economics at Ulster University, Michael Smyth, is well placed analyse both the short and long-term impact of the 23 June referendum. However, even he concedes that the current uncertainty over the UK’s future relationship with the EU means that predicting the global economic impact of a Brexit is next to impossible.

Smyth has questioned why a trade agreement as complex and far-reaching as that of the EU’s was able to be simplified into a yes and no scenario for voters while voicing surprise that a higher threshold, often set at 60 per cent in other countries, was not invoked. “A lot of people voting in the referendum came to the realisation that their generation and the generation of their children were not going to see improvements in their standards of living and instead of blaming their politicians they blamed Brussels. For me that’s sad. Failure to train enough doctors, create teaching hospitals and improve education around the STEM subjects is not the fault of Brussels. In fact, these problems will only get worse as a result of Brexit, yet I see no plan from Downing Street to tackle the problems,” he said.

He believes that the actual economic impact of a Brexit escaped the public consciousness when they went to the polls. “I cannot see how Britain can negotiate a better trading deal than the one it currently holds with the European Union,” he added. “Through all the campaign shouting the public have overlooked the benefits offered to the UK through the EU’s four freedoms (goods, services, money and people) and in doing so Britain is causing irreparable damage to itself. 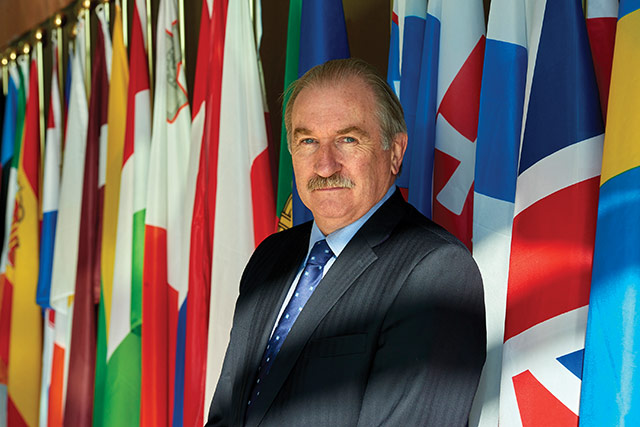 “Europe needs the UK as much, if not more, than the UK needs Europe in terms of trade. Progress of the Single Market without the UK as a major harmoniser and leader will be difficult, however, the fact remains that Norway is an example of the cost of accessing the single market by accepting the four freedoms. The freedom of the movement of people has always worked in the UK’s favour and it is something that Brussels cannot be seen to be flexible on. Norway plus is not an option.”

Dismissing some of the main arguments driven by the leave campaign influential in public opinion, Smyth said that objections to migration are not well founded. “Blocking the free movement of people also means fewer foreign voices in our schools and a reduction in the pool of productive and hard-working people for businesses to draw on. If the UK doesn’t invest substantially in its vocational skills then it will very quickly rue the disappearance of those foreign skills. The fundamental reasons behind why the UK economy isn’t as productive or competitive as others across Europe is nothing to do with immigration. It’s the fact that our own systems and practices are poor and successive governments have failed to recognise that.” He also dismissed arguments that’s a move away from the EU would mean for less regulation, arguing that harmonising markets across Europe to a single standard was a 15 year process that benefited all concerned. “Britain is a modern industrialised country which demands the highest food and safety standards. Negotiating new deals across the globe will not happen overnight and I find it difficult to see how they will get better terms than the current TTIP deal for example.

“I think in the long-run the UK economy, which is one of the most flexible and adaptable in the world, will adapt to the new circumstances. In 10 years it will likely be strong and vibrant because it will have found another way but between now and then it will be very bumpy and uncertain. Everything I have learnt in my academic life says that uncertainty is bad for the economy and looking to the future is very difficult.” 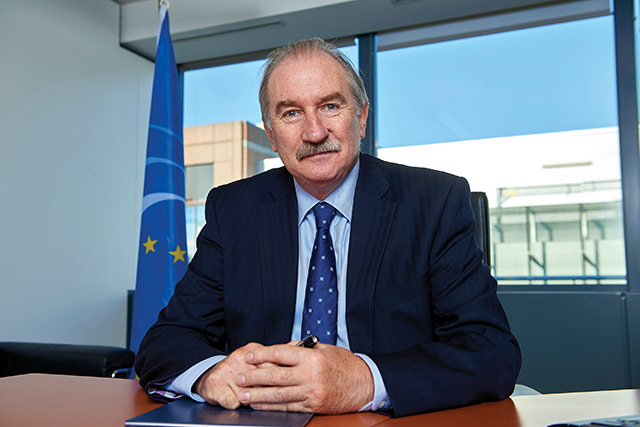 One obvious example of the immediate impact of the referendum result is the future of devolved corporation tax in Northern Ireland. A leading figure in promoting the reduction in the level of corporation tax for Northern Ireland, Smyth recently described it as a “busted flush”. The Executive have pledged to initiate the level of Corporation Tax to 12.5 per cent by 2018, mirroring the current rate in the south which has been successful in attracting foreign direct Investment (FDI) in the form of huge multi-national companies like Google and PayPal. However, as Brexit uncertainty is likely to deter investment in Northern Ireland, Smyth believes the terms of any corporation tax deal with Westminster will now have to be revised and is critical of those, particularly in the political sphere, who have suggested Brexit leading to a lower cost of Corporation Tax.

“If the new Corporation Tax rate is introduced in April 2018 as planned, it is likely that the UK will be outside or leaving the EU by that time and their main rate of Corporation Tax will be 15 per cent, or less. The Republic of Ireland will have to retaliate and cut its rate to 10 per cent and the question would have to be asked as to why any right thinking company from North America or South East Asia contemplate coming to Northern Ireland, where access to the Single Market will be potentially limited,” he added.

FDI was a key component in Northern Ireland’s attempts to rebalance the economy from the 25 per cent budget deficit that it runs annually. Smyth points to under-employment and low levels of pay in the private sector as the cause behind a decline in the pre-peace process deficit of 16 to 17 per cent to current levels and believes that contrasting economic scenarios on the island of Ireland has brought a United Ireland closer. His reasoning lies behind the potential for Northern Ireland to tap into the possible benefits the Republic of Ireland might see from Brexit. “Although it’s not a perfect one, a single labour market exists on the island of Ireland,” he said. “As Dublin gets more crowded, places such as Dundalk are becoming prime locations for businesses and are even more accessible for the northern worker. I think the government’s appreciate that the common travel area is maintained but going forward I think they will recognise the potential benefits of aligning areas such as social security and the fiscal systems.”

An all-island approach could benefit those sectors set to be hit hardest when the UK leaves the EU, such as farming, rural development and the community and voluntary sector, areas that will require significant funding from the Treasury. Smyth said: “Farming here is 4 per cent of GDP compared to 1.5 per cent in Britain. Our farmers are paid to produce food through the EU’s Single Farm Payment and I don’t believe the Treasury will treat our farmers as well as Brussels does. I doubt rural communities, already feeling hard done by in terms of broadband access, banking services and retail, will be a Treasury priority. Where they will have to step in though, although to what degree is unclear, is the voluntary and community sector, where EU programmes currently support close to 28,000 jobs.”

Smyth described reliance on the Treasury and a likely reversion to standard capital grants as a step backwards for the Northern Ireland Economy and pointed to projects such as a an infrastructure bank, similar to what is operating in the south, as unlikely without sovereignty from the Treasury.

Overall Europe will miss the UK for more than just economic reasons. Smyth said that in Brussels people are recognising the potential loss of what he described as “Anglo-Saxon fairness and desire to play by the rules”. “I think Brussels will miss the questioning and the due diligence that UK members brought to the Council, the Commission and to the other institutions,” he said. “In my heart of hearts I know this is the wrong decision. The opaque nature of British constitution will mean that this is not over yet and will not be over until the Supreme Court adjudicates on the High Court’s decision about triggering Article 50. What I am certain about is that when Article 50 is triggered and negotiations begin, the public consciousness in Britain will not be able to escape the overriding impression that we are not going to be better off as a result of leaving Europe.”