Tourism in Mid Ulster enjoyed something of a recovery in 2018, suffering a fall in the number of visits and nights spent in the district, but enjoying a rise in all spend categories. This recent uptick still has a way to go before it can return to the heights enjoyed in both 2014 and 2016.

With Mid Ulster currently roughly midway through a tourism strategy where Seamus Heaney, archaeological sites, history and heritage and outdoor activities have been pushed as the area’s key draws, the news of an annual rise will have been well received in the district. With the Seamus Heaney HomePlace in Bellaghy and the rich archeological and historic resources from the Mesolithic, Neolithic, pre-Christian and early Christian periods through to the O’Neills, the Flight of the Earls and plantation times, Mid Ulster has the tools available to it to continue its recovery towards 2016’s level and stabilise what has been an unpredictable sector of late.

The rises in both overall and average spends can be seen as an encouraging and somewhat surprising development given the fact that the overall number of trips to Mid Ulster continued a downward slide. 130,088 trips were made to Mid Ulster in 2018, down 5 per cent from 2017’s 136,626 and down significantly from 2016 and 2014’s figures of 178,480 and 213,732 respectively. However, these raw figure drops are not among the worst in Northern Ireland, with four districts suffering greater proportion drops in terms of trip numbers and Causeway Coast and Glens suffering an identical 5 per cent fall. 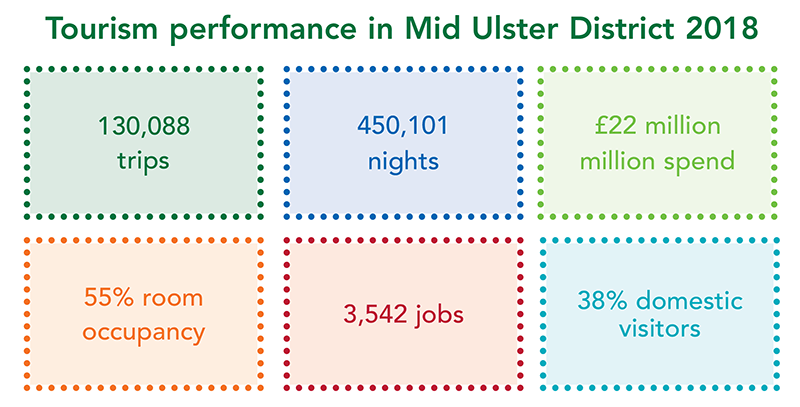 Tourists spent 450,101 nights in Mid Ulster overall, down 15 per cent from 2017’s 528,468, itself a significant drop from 2016’s 713,357. With the second lowest amount of hotel rooms out of all of Northern Ireland’s local government districts, Mid Ulster recorded the lowest room occupancy rate of any district in 2018, with just 55 per cent of rooms occupied. However, the district did record the second highest room occupancy rate for guest accommodation/guesthouses/beds and breakfasts, also 55 per cent.

1.2 million visits were made to attractions in Mid Ulster in 2018, with Ballyronan Marina and Todds Leap Activity Centre proving the most popular, but no Mid Ulster visitor attraction ranked within Northern Ireland’s top 10 most visited of the year. Dungannon Park was, however, the ninth most visited park in Northern Ireland. The vast majority of trips to the district were done with the purpose of visiting friends and family, with 68 per cent, the second highest among districts, citing that reasoning. The district had the fourth lowest proportion of overnight holiday visitors, with 26 per cent. However, Mid Ulster did attract the joint-second highest proportion of overnight trips from mainland Europe, shared with Armagh City, Banbridge and Craigavon. 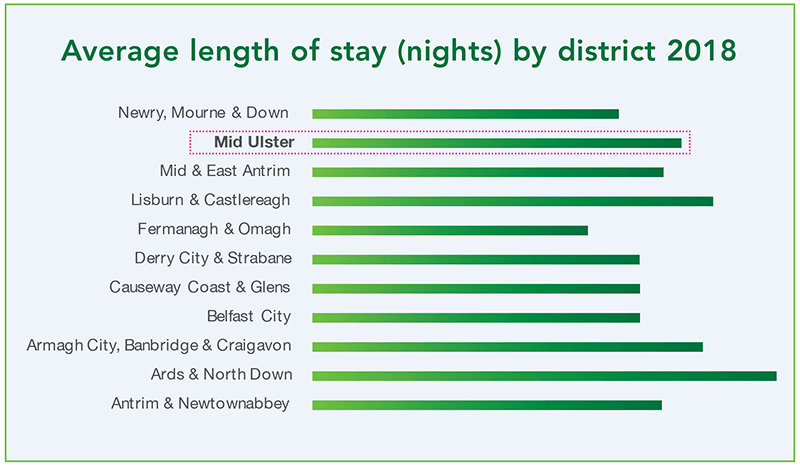