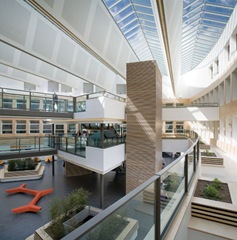 Progress is evident on priority projects, but future capital spending depends on the forthcoming Budget.

The Investment Strategy for Northern Ireland, which predicted that £2,575 million would be available for health infrastructure from 2011 to 2018 “has now been superseded by the new budget which is currently being finalised,” a health department spokesman told agendaNi.

Since the release of ISNI in 2008, the DHSSPS has been the only department that has not released a delivery plan.

Because of the current financial situation “it would be meaningless to provide details of what had been planned under the previous assumptions,” the spokesman said.

The absence of delivery plans, though, has not held up spending on those projects that have already started.

Until September 2010, over 70 per cent of the hospital modernisation money

Of the ‘milestones’ identified in ISNI, the £64 million Downe enhanced local hospital and the £100 million Ulster Hospital redevelopment are the main achievements. Other projects tend to be at earlier stages of design, procurement and construction.

He added that the economic downturn “rendered this [sales] target unachievable,” and effectively reduced the available budget by £80 million. “In addition, DHSSPS has had to contribute more than £20 million to pressures at Northern Ireland block level, with a further £20 million required to address swine flu,” he said.

In light of this shortfall, in 2008, the department undertook a comprehensive review of its capital priorities, which resulted in “significant changes” to the investment programme. The DHSSPS saw this as “not a delay but a reprioritisation.”

The total available budget was therefore reduced from £718 million to approximately £600 million. Up to September 2010, £438 million has been spent and the department expects its full spend to reach the £600 million mark.

• the enhanced local hospital in Downpatrick;

• the first phase of the Ulster Hospital;

• health and care facilities in Knockbreda, Shankill Road, Beech Hall and Portadown; and

• the progression of the new critical care building at the Royal Victoria Hospital.

Of these, the Beech Hall and Shankill health and care centres and the critical- care building at the Royal are yet to be completed.