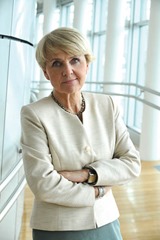 Writing for agendaNi, former Regional Policy Commissioner Danuta Hübner reflects on the significance of 2014 for Europe as a whole. She also calls for aspiring euro members to have a say in how the euro zone works.

2014 will certainly be a year to remember. For one, it marks a modest and cautious recovery from the crisis. 2014 also allows us to celebrate the 10-year anniversary of the big 2004 enlargement. It also marks a more important anniversary, namely the 100th anniversary of the Great War, serving as a reminder that peace cannot be taken for granted. Last but not least, 2014 is the year of the European elections and thus a year which gives us a chance to look back at how far the union has come, where it is going and how it can be improved.

Europe is strikingly different today when compared to a mere five or ten years ago. The crisis has brought about an unprecedented range of financial sector and economic governance reforms and has posed novel challenges to the union’s development. The challenges concern its legitimacy, efficiency and flexibility.

A growing number of union level measures adopted as a result of the crisis were not accompanied by corresponding supranational measures of legitimacy. The crisis also brought to the fore the issue of institutional efficiency and the questions of whether we have in place adequate institutional structures to deal with the problems of the union as well as whether inter-institutional cooperation can live up to the challenges of the day.

And finally, the crisis also generated novel layers of differentiation in the union. The bulk of crisis-driven reforms targeted the common currency area.

Non-euro area members aspiring to join the euro were not always taken on board in the reforms on an equal footing with their euro counterparts. Moreover, different appetites for reform were also displayed even within the non-euro group of member states. These trends exposed the difficulty the EU faces in dealing with heterogeneity.

For obvious reasons, the focus of crisis-driven reform efforts has been largely on the euro area. In general, one could say that the euro-non-euro divide is a product of necessity, driven by treaty limitations and an urgent need for solutions. This, in turn, made the reaching out to inter-governmental agreements at times inevitable.

Recent reforms certainly paint the picture of an increasingly euro zone-focused single market. There is no reason to assume that this trend will come to an end in the near future. It is only natural therefore to ask at this point how non-euro member states can and should position themselves with respect to these economic and monetary union (EMU) focused reforms.

It is clear that the group of non-euro member states is not homogenous. Looking specifically at those non-euro member states which wish to one day join the single currency, it seems advisable for them to participate in the reform of the EMU. They cannot be mere spectators. By staying on the sidelines, they would alienate themselves from the process of deeper European integration.

Unfortunately for the time being, the policy stance on the non-euro area remains largely confused. Whenever a new measure is proposed, a debate then emerges within the European Parliament and European Council on whether non-euro members should be allowed to opt-in, and, if so, under what conditions. Slowly, such a stance might create further uncertainty about the role of these member states in the union.

A way to address this concern could involve formalising the opt-in system and putting forward a type of opt-in blueprint, which can be easily made use of whenever a new EMU initiative is put on the table.

One option to always take on board these opt-ins could involve making use of ‘enhanced co-operation’, thus keeping policies within the treaty. This would keep us within current treaties, while allowing us to move forward and attenuate the risks of a two-speed Europe.

Ultimately, a two-speed Europe should not just happen. It should be carefully designed on the base of the only mechanism we have in the treaty, which is enhanced cooperation. Only then will we be able to avoid EU fragmentation that could weaken it. The single market should remain at the heart of EU integration.

Danuta Hübner is a Polish MEP and Poland is one of eight member states waiting to join the euro zone. An economist, she was previously Regional Policy Commissioner between 2004 and 2009 and is also a member of the centre-right European People’s Party.