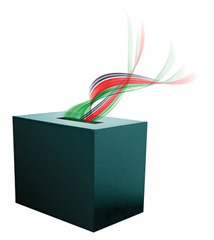 agendaNi previews the key dates and phases of the campaign as polling day approaches.

The European election campaign will officially last for six weeks in April and May, although parties have been promoting their candidates for several months in advance.

A formal notice of election will be published on Monday, 14 April, with nominations opening at 10am the next day. Nominations will then close at 4pm on Thursday, 24 April – and candidates wishing to withdraw must do so by that deadline as well.

The Assembly will return from its Easter recess in the following week but its work will be disrupted as many MLAs will be out campaigning with councillors and European candidates. The council election will be more important – in political terms – and will make for a particularly intense campaign over the following few weeks.

The May bank holiday (5 May) offers candidates the chance to meet and greet a large number of voters, weather-permitting. Campaigning may slow down later in the week as the Giro d’Italia race crosses the province for three days. The tempo will then rapidly pick up over the last week and a half.

For the whole UK, polling day itself will take place between 7am and 10pm on Thursday, 22 May. The Republic goes to the polls on Friday, 23 May, and has the same polling hours.

Votes will be verified “as soon as practicable” after polls close although this will have to take place along with the verifying of an equally large number of votes for the council polls.

Counting for the 11 new councils will begin on Friday and continue from 9am on Saturday. The European Parliament count itself will be held on bank holiday Monday, 26 May.

This will give counters a break but the main reason is that votes cannot be counted until all polling stations across Europe close. Declaring an early result in one country could, in theory, influence on voters’ choices in a neighbouring country. For the same reason, exit polls cannot be published or in any part of the EU until all polls close.

This is a single transferable vote election, where voters can rank as many candidates as they wish in order of preference. The quota is calculated by dividing the number of valid votes cast by the number of seats available and adding one.

If a candidate has more votes than the quota, they will be declared elected after the first count. Electoral officials will then look at whether this candidate’s surplus should be transferred.

After this second count, the other candidates were still short of the quota. Jim Allister had the lowest number of first preferences and was then eliminated.

The third count was decisive. With the help of Allister’s transfers, Jim Nicholson went up to 132,227 votes and exceeded the quota. Nicholson was therefore declared elected at this point. Diane Dodds was the next candidate down, in terms of votes, and statistically there was no possibility that Alban Maginness could overtake her. Dodds was therefore declared elected after the third count although she was still under the quota.