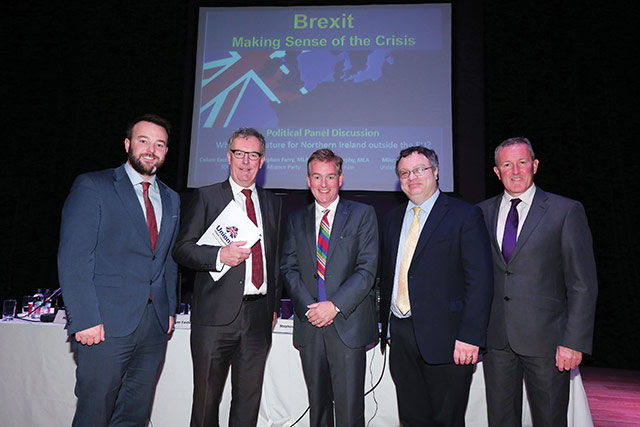 Speaking at agendaNi’s Brexit conference, four of the five main parties outline their respective analyses of the potential implications for the North. Ciarán Galway reports.

Across the political panel drifts an unfamiliar air of general consensus: the result of June’s referendum has cast a thick cloud of uncertainty over the head of broader society.

Alliance’s Stephen Farry, equally unenthusiastic, outlines: “I don’t see an upside to Brexit. I don’t see all these wonderful opportunities or the new land of milk and honey on the horizon that others seem to be talking about… In terms of our own situation, I think we do need to recognise a number of principles. Yes, we are part of the United Kingdom, but we are not as British as Finchley… And we are a region that has voted to remain and that is the wish of local people.”

Colum Eastwood places a similar emphasis on the majority of the electorate in Northern Ireland who voted to remain in the EU. “The EU is in the DNA of the SDLP; we believe in it fundamentally. It is part of our thinking in everything we do. It is devastating for us and I think that it is devastating for all of our people that we might be dragged out of that Union against our will.” He continues: “I think that we, all of us, have to stand by the 56 per cent of people who voted to remain and I don’t accept that we’re bound by a result that was based on lies and deceit.”

Conor Murphy is unequivocal in his apportioning of responsibility for the current climate of uncertainty: “We are in the position we are in because of a democratic deficit. We don’t have self-determination; decisions are taken in London which are against the interests of the people who live in this part of Ireland.”

The panel then opens to several questions from the cross-section of experts from the business, community and voluntary sectors who are in attendance.

In response to a query regarding the accessibility of expertise required to produce a strategic vision ahead of negotiations, Mike Nesbitt maintains: “Do we have the intellectual capacity to come up with a vision for the benefit of the people of Northern Ireland? Absolutely. There is enough capacity in this room to do it before we go home for our tea. The difficulty is not the capacity to do it, it’s the political nous to do it.”

Murphy does not dispute this, instead asserting: “This is a broader issue than simply politics, and it needs to involve business, it needs to involve the voluntary and community sector and agriculture, because these are the people who will feel the very real impact.” However, he warns: “The danger is, while we are doing our blue-sky thinking, the British government are off negotiating and, however long it takes, and however the degree of uncertainty there is around all of that, at some stage they will come and present a package and say, ‘that’s it, make the best of it’.”

On the other hand, Eastwood is scathing in his remarks: “I don’t think the expertise exists and I think this was proven by the fact that there was no contingency planning at all. I do not think it took a genius to work out that this was a very real possibility.” Adding: “And it seemed to me, having had discussions before and after, that the only people that have done any real contingency work are actually the Irish Government. They are very much on their game when it comes to this. That is why we need to see the Irish Government as a very close ally.”

Farry diplomatically asserts: “I think we need to really plan for a whole range of different scenarios over the months ahead. In an ideal world, we would have a situation where the Executive could make a common case for some sort of special status at this particular point in time. To really get access at EU level and to get that taken seriously, we would need that Government request.” Addressing a potential ‘special status’, Farry maintains that an open mind should be kept on both membership and non-membership solutions. Although he does acknowledge the potential difficulties: “I would be slightly more sceptical about the institutional resistance that we are going to face, particularly in the initial phases of negotiation, but down the line they may open up. It is a debate and an argument that we have to make regardless and not be deterred by any barrier that we may face.”

Nesbitt references the natural environment and biodiversity as being among the pressing issues that require consideration in the aftermath of the referendum. “I think there is a great need to define what obligations we will continue to have to meet because of other treaties and membership of non-EU bodies. I fear, for example, that the fishing fleets in Portavogie, Ardglass and Kilkeel think that they, after we exit the EU, can simply sail into the great blue sea and fill their nets. But actually, sustainable fishing was a UN commitment and we are not exiting the UN.”

In a similar vein, Murphy criticises elements within the pro-Brexit campaign who, prior to the referendum, made erroneous claims about environmental regulations. “They were telling people, farmers in particular, that they would be getting all the money without the red tape, and telling the fishermen that they would be able to fish where they like, ‘so vote to leave Europe’. I think, pardon the pun, that some of those chickens are coming home to roost.” He adds: “The difficulty for some people to now [explain] the red tape that must continue to exist is that they sold a lie during the referendum saying that [the regulations] will all be gone. Yet they are absolutely necessary. We need to continue to ensure that there are environmental protections, whatever the outcome of this negotiation.”

Continuing on this train of thought, Eastwood highlights: “The environment is probably the best example of how Europe has been very positive and an issue that does go across borders. It doesn’t respect borders at all.” He suggests: “We do need to jealously guard those types of regulations. Those regulations are there for a reason. Europe has given us clean water and clean air and all sorts of other things that we just don’t seem to respect.”

Providing some degree of post-Brexit reassurance for the environment, Farry notes: “There are regulations which come from Brussels which apply automatically and then there are directives which the Northern Ireland Assembly has to transpose into domestic law. My understanding is that all the directives will stay in place until the Assembly decides to vote them out and I would hope that there would be a sufficient majority in the Assembly to protect any directive that would certainly fall under our control.”

Commenting on European funding for the voluntary sector, Conor Murphy asserts: “It is probably one of the issues that Máirtín Ó Muilleoir, as the Finance Minister, has been most active on. He has encouraged all of those who intend to continue applications to put those applications in. At the very least, it is a way of quantifying the amount of money that should have been drawn down to this area, in order to put that argument to the British Chancellor.” Emphasising that there are no guarantees of future funding for applications that are not approved by the time of the Autumn Statement, Murphy contends: “We need to continue to take [the] fight directly to the door of the British Treasury, because they are the people who said that, if we leave Europe, we would have more money to spend on all of these things and we would all be much better off, yet all those promises have melted like snow off a ditch. There is no spirit of generosity coming from the Treasury in relation to our needs.”

Striking an austere note, Eastwood opines: “The honest answer is there are no guarantees and that’s the unfortunate thing about this. But I keep going back to the point: Article 50 has not been triggered; we haven’t left the EU. I think we need to be very strong in our demand to remain as members of the EU and, if that doesn’t happen, that we have that special status. For me special status would mean a continuation of European funds.”

Farry, concurring with this analysis, states: “The notion that the UK Government would actually fill the void left by absence of structural funds, I think, is very optimistic. We get more from the structural funds than we would from the Barnett consequential equivalent. Let me put it in very stark terms, I think these figures are correct, that we are 3 per cent of the UK’s population but we make up something like 10 per cent of the agricultural support payments from Europe. So that’s a very clear challenge.”

Nesbitt follows up by reiterating the sense of ambiguity surrounding future EU funding: “Within this environment of total uncertainty we do not know who is doing what on the British side of negotiations because of the turf war between Fox, Davis and Johnson. Having been in Brussels last week, there is clearly a turf war going on between the Council and the Commission, and some people are forgetting that there is a third leg in the stool, namely the Parliament who will have their say.” He closes with a wry reference to pro-Brexit promises: “There is, according to the Brexiteers, plenty of money coming our way when we aren’t giving it to Brussels.”

Conference chair Mark Carruthers concludes proceedings with an apology for the DUP’s conspicuous absence and remarks: “We haven’t come up with many answers, we have just underscored the scale of uncertainty that surrounds all of this.”

Here is what they had to say:

“The British Government are clearly in a mess and that is a big wake-up call for unionism. They have got us into this position because of infighting within the Conservative Party and it will have a profound impact on our livelihoods here in this part of Ireland.” Conor Murphy, MLA, Sinn Féin

“When you listen to all the conversations, debates and interviews on BBC News or ITV news or Channel 4, we are rarely mentioned. We are the part of these islands that is going to be most affected. I live a mile from the border. I know what this is going to do to my community and communities all across border areas. I don’t want to see that happen.” Colum Eastwood, MLA, SDLP

“We have to take into account what may or may not happen in Scotland. If there is a real, serious prospect of Scotland seeking independence and perhaps leaving the United Kingdom, to an extent that changes the dynamic for unionists. So there may well be some reassessment in due course.” Stephen Farry, MLA, Alliance