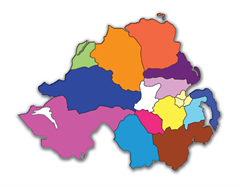 A major political upheaval is predicted as plans for new constituencies are published. Peter Cheney sums up the main changes.

Plans to cut Northern Ireland’s constituencies from 18 to 16 will radically redraw the political map. Provisional proposals, announced by the Boundary Commission in September, would dissolve South Belfast (formally known as Belfast South) and create three constituencies cutting across Antrim and Tyrone.

Northern Ireland is likely to be split half- way between unionist and nationalist MPs at the next general election, with Alliance hoping to hold on in Belfast.

Boundaries were last redrawn in 2007 but the Coalition Government brought forward a new review after coming to power. The Boundary Commission for Northern Ireland is required to review constituencies every five years; these constituencies will last at least up to 2020.

This was essentially a trade-off for Conservatives agreeing to the AV referendum. The Tories complain that small inner city seats give Labour an unfair advantage in Britain. Those constituencies were formed to represent growing populations during the Industrial Revolution, which have since declined.

As a result, the House of Commons will be cut from 650 to 600 MPs at the next general election. This breaks down into:

Belfast had a single seat up to 1885, when it was divided into four quarters. That layout has continued to the present day, except for a brief rise to nine in the 1918-1922 Parliament. Three constituencies would represent the city from 2015 onwards:

Sitting South Belfast MP Alasdair McDonnell is dismayed and claims that Belfast will lose clout compared to its English counterparts. However, Newcastle and Bradford (with similar populations) will also have three MPs.

As a rule, boundary commissioners must keep within a 5 per cent range of a set UK-wide quota (76,641) i.e. between 72,810 and 80,473 registered electors. Northern Ireland’s commissioners have the discretion to lower the minimum number to 70,583.

Local geography and existing boundaries are considered but the mathematical approach is bound to cause some distortions in shapes.

South Antrim, Mid-Antrim and Mid-Tyrone are roughly horizontal. The first constituency stretches from Lough Neagh to Belfast Lough. The second connects Ballymena and Larne and is less than 10 miles wide in places. The third runs across Tyrone from the Donegal border to Lough Neagh.

North Antrim gains Coleraine, Portstewart and Portrush despite all three being in County Londonderry. Jim Allister claims that the present seat has been “unnaturally sliced across the middle”.

The new Glenshane constituency is based on the bulk of East Londonderry plus Magherafelt and the surrounding area. The name change would delete Londonderry as a constituency name for the first time since the Plantation. Gregory Campbell’s seat is also at risk from a Sinn Féin challenge.

· Foyle expanding up the River Foyle as far as Strabane;

· the Ards Peninsula joining North Down (as happened before 1983); and

Based on the 2010 and 2011 polls, six of the 16 constituencies would be safely unionist (the three Antrims, Lagan Valley, North Down and Strangford) and six safely nationalist (South West Belfast, Foyle, Glenshane, Newry and Armagh and Mid-Tyrone).

Fermanagh and South Tyrone, a long- running battleground, gains six rural and mainly nationalist wards near Omagh. However, in the Assembly election, the total unionist vote was 2,875 votes ahead of Sinn Féin.

Republicans are gaining ground in North Belfast and Upper Bann. Shankill unionists will help to boost Nigel Dodds’ majority (2,224). Upper Bann is almost split three ways between the DUP, Sinn Féin and UUP. This is the Ulster Unionists’ strongest constituency and their best chance for a return to Parliament.

Finally, Alliance and the DUP will both aim to win South East Belfast. Naomi Long is likely to gain voters from party colleague Anna Lo. Peter Robinson does not plan to stand again and Jimmy Spratt is a possibility, after two attempts in South Belfast. Long’s majority is 1,533 votes.

Boundary changes will have an automatic impact at Stormont’s next poll (see box). Keeping six MLAs per constituency would bring the total to 96, compared to the current 108. Further cuts could reduce the Assembly’s size to 90, 84 or 78.

The 1973 Assembly, the 1975 Constitutional Convention and the 1982 Assembly each had 78 members. The Northern Ireland Forum (elected in 1996) had 90 constituency members and 20 chosen from regional lists.

Assembly results depend on several factors, including turnout and the location of local support bases. The larger parties are more likely to lose seats by virtue of their size. Minor parties and independents tend to be concentrated in smaller areas, which are therefore easier to defend.

This is only the first stage of the revision process. The provisional proposals can be viewed online (at www.boundarycommission.org.uk) and the public consultation runs for 12 weeks to 2 December.

Written submissions can be made and public hearings will be held in Belfast, Omagh and Ballymena. All submissions will be published.

Revised proposals will then be drawn up if necessary; this is almost certain given the political reaction. The consultation on those will last for eight weeks.

Any further amendments will be included in a final report, submitted to the Secretary of State by 1 October 2013. The commission can recommend last minute changes before he lays the final map before Parliament.

Elections for Westminster, Stormont and local councils will coincide in May 2015, if the current electoral timetable is used. The general election is scheduled for 7 May. To avoid a clash, NIO ministers will look at extending the Assembly’s term. The terms of the Scottish Parliament and Welsh Assembly are being extended to May 2016 through the Fixed-term Parliaments Bill. There are no plans to extend the councils’ term. The date for a 2016 Assembly poll will be a sensitive choice, given that year’s emotive centenaries. The Easter Rising took place on 24-30 April 1916. The Battle of the Somme started on 1 July. Easter Day in 2016 falls on 27 March.