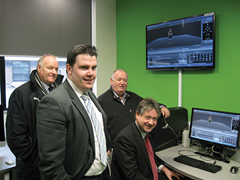 Tensions rose at Stormont as MLAs debated the flags dispute. The Assembly continued to debate the future of housing and welfare, and also said goodbye to one of its more obscure powers.

January’s proceedings were inevitably overshadowed by the flags protests. The dispute also reached Stormont with calls to increase flag-flying at Parliament Buildings. The Assembly Commission has a designated days policy with the specific dates chosen by OFMDFM. Edwin Poots said that this was “now an issue” after the decision at Belfast City Hall.

The commission has not met since 4 December as Sinn Féin, the SDLP and the Alliance Party have refused to attend; the three parties say that no decision should be taken while disorder continued.

Party leaders condemned the protests and associated violence when the Assembly held its first plenary meeting on 14 January. A debate on the causes of the dispute took place on the next day. Despite the title of the UUP motion, on inclusivity, mutual respect, peace and democracy, the debate was heated and tense with accusations traded across the floor of the House. The vote was delayed until 21 January.

A DUP amendment, which would have deleted a reference to the Good Friday Agreement, was voted down but this was supported by most UUP members despite their party’s support for the agreement. Basil McCrea and David McClarty voted against the amendment. Mike Nesbitt said that the UUP had voted tactically and it was “clear … that the DUP amendment was never going to pass.”

Major policy announcements also came before the Assembly, with Nelson McCausland’s decision to abolish the Housing Executive and John O’Dowd’s plans for new school buildings. O’Dowd hailed a “much-needed boost to the construction industry” but McCausland was criticised by the other parties for using a written statement. McCausland said that he had been “advising members of the start of a process” and considered this to be the best format.

The ad hoc committee on welfare reform reported on 23 January but Sinn Féin and SDLP members felt that the report did not go far enough. Unionists and the Alliance Party said that this was the best attempt within the limits of parity.

As public attention started to focus on food safety, the Agriculture Committee affirmed that it was “extremely proud” of the local beef industry as it had “one of the highest standards in the world in relation to the traceability of meat.”

The Health Committee and Agriculture Committee held a joint meeting to consider the wide-ranging implications.

On a lighter note, officials informed the OFMDFM Committee that the Assembly has had responsibility for “activities in Antarctica” since 1999.

The Assembly cannot handle international relations but the oversight appeared as the frozen continent is not part of any foreign country. The power will officially move back to Westminster through the Antarctica Bill which is currently going through Parliament.