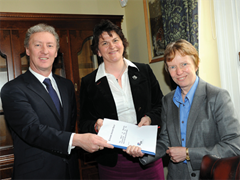 A tremendous will to make things better is one of the main positives for Northern Ireland’s economy and lower corporation tax can lift it to a new level, according to Kate Barker. The Economic Advisory Group (EAG) for Northern Ireland, which she chairs, was established in May 2010 to advise Arlene Foster and other Executive ministers.

The EAG has concluded that lowering the corporation tax rate “does offer the real prospect” of better living standards and employment levels in the medium to long term. It also emphasises that the Executive should keep the yields from income tax and national insurance contributions to offset the reduction in the block grant. With this approach, the policy is expected to break even by 2021.

A radical change in policy, Barker finds, is needed to even out regional economic variations and improve productivity.

As Labour found out in power, it was very difficult to rebalance the English regions. Their regional development agencies were established in 1999 and are due to close next March.

“After 10 years or so, really trying quite hard, it didn’t arguably make very much difference at all,” she comments. As Chancellor, Gordon Brown aimed to raise UK productivity by 0.5 per cent per year but was also unsuccessful.

“To make a substantial difference to a productivity growth rate over 10 or 15 years, you have got to do something very significant,” she states. “And that’s why corporation tax seems to me very attractive, relative to some of the other things that people talk about [such as R&D and innovation].”

Reduced corporation tax could also distribute growth more fairly, by leaving it to the market, whereas a grant-based approach involves “someone standing in between” and favours selected companies.

A new economic strategy should accompany lower corporation tax, according to the group, and must prioritise investment in R&D. This would create a higher value supply chain, generating start-ups around FDI, and might “move the whole economy on to a better growth path.”

Asked to assess the current state of our economy, Barker firstly praises Invest NI’s “very successful” performance at bringing in inward investment. This contrasts with similar economies despite the province’s geographic position which adds to business costs. The quality of the province’s higher education system and transport infrastructure also stand out as strengths.

Invest NI helped to create 10,981 jobs from foreign direct investment over the life of the last Assembly.

On the weaknesses, she adds: “It does, of course, produce good graduates but they go.” The unemployment rate (7.2 per cent at the time of interview) masks a high economic inactivity rate (27.7 per cent) and productivity remains low. Northern Ireland cannot stand alone without Westminster’s subvention but this is also true of other regions e.g. North East England.

Barker, though, is keen to stress the positives. Clearly defined borders, interestingly, are one of these: “It’s an odd thing to say, in terms of Northern Ireland’s history, but it’s cohesive in a sense.”

To date, the EAG has produced four reports:

• a response to the economic strategy consultation (25 February 2011);

• its response to the Treasury’s consultation on rebalancing the economy.

However, previous reports on improving the business environment and public sector efficiency have rarely been followed up with action.

“There seems to be difficulty in progressing any of these,” Barker explains, “because inevitably the difficulty with any policy that’s sort of a little bit radical is that it creates winners as well as losers, and will offer some political challenges.”

Right now, though, she sees a real opportunity to move forward and hopes it will be seized. Barker points to the Coalition Government’s interest in solving Northern Ireland’s economic problems and the election of a new Assembly.

Instead of re-inventing the wheel, the EAG aims to get the reports “off the shelf”

and work out what makes sense. It will then push these proposals through and get people talking about implementing them by specific dates.

After the corporation tax debate, the EAG’s next priority is analysing the impact of planning reform on business. Barker has a strong personal interest in the topic. In 2005 and 2006, she led a review on English land-use planning for the Treasury and Department for Communities and Local Government. The group will also encourage Invest NI to develop a range of skill sets, to help attract higher value investments.

Barker counts herself privileged both to be appointed to this role and to have served on the Bank of England’s Monetary Policy Committee from June 2001 to May 2010.

Looking back frankly, she says its members “did a pretty good job” before the financial crisis but she is more doubtful about its decisions as the crisis approached and was unfolding: “Were there questions on the economy that we ought to have asked and didn’t? And this isn’t just us. I think there were lots of people who didn’t ask the right questions in the mid-2000s.”

Speaking to the Financial Times in May 2010, Barker commented that the committee was too focused on hitting the inflation target, which perhaps distracted members from wider strategic issues.

As for her work here, she is “really conscious of the scale of the challenge that Northern Ireland faces”. Barker adds: “I hope that some of the work we do will help to make a difference but I’m also a realist and I know how little any one individual can do or even any one policy.”

Raised in Stoke-on-Trent, Kate Barker graduated from Oxford University in philosophy, politics and economics in 1979. She was Chief European Economist at Ford (1985-1994) before becoming the CBI’s Chief Economic Adviser (1994-2001).

She was awarded a CBE in June 2006 for services to social housing, and is currently a senior advisor to Credit Suisse (on fixed income research) and a non-executive member of the Office of Budget Responsibility.