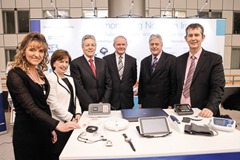 The last five years have seen Northern Ireland compete for funding and influence at a time of considerable change across Europe. Peter Cheney reviews the work of European Parliament and local MEPs since June 2009.

Emotions swung from high to low as the numbers added up in the King’s Hall during the 2009 European election count. Much the same can be said for the general state of Europe’s economy and society in the subsequent five years: a half-decade when debt figures, bail-outs and budgets have created winners and losers across the continent.

The DUP had aimed to ‘top the poll’ as it had in all previous European elections but had a humiliating finish when Diane Dodds was elected last and under the quota.

Sinn Féin, in fairness, did not appear triumphalist despite their unprecedented success and Bairbre de Brún left the King’s Hall content with her win. Jim Nicholson – then standing for the Ulster Conservatives and Unionists – was delighted to overtake the DUP although his personal poll had again decreased.

Dodds made her maiden speech in Strasbourg in 14 September, citing local security issues.

“In my constituency of Northern Ireland, we know the pain of terrorism,” she stated. “Yes, we have witnessed a transformation in Northern Ireland in recent years but there are still those who would seek to cause bloodshed.” Dodds called on fellow MEPs to back the campaign for compensation from Libya for victims of IRA violence. Later in the day, she told Commission President José Manuel Barroso that their “paths diverge completely” on the Lisbon Treaty but she valued the “support and close working relationship of Commission officials at all levels with Northern Ireland.”

Those words have been at odds with her vocal opposition to federalism but Dodds has always been keen to seek more European funding for Northern Ireland. She maintains that the province needs to maximise its budget whether inside or outside the EU.

Most of her manifesto promoted the DUP’s achievements in government. It also condemned the loss of national vetoes and the harmonisation of national immigration, defence and foreign policies.

The European Union, though, also needed to “adopt a more proactive role in dealing with human rights abuses” e.g. in Zimbabwe and against the persecution of Christians. Dodds sits as an independent but this gives her more speaking time and allows her to build informal alliances with other MEPs, especially on agriculture and fisheries.

Jim Nicholson’s manifesto called for a stronger single market and the repatriation of social and employment policy to Westminster. It also sought a US-EU free trade deal by 2015, to stimulate economic recovery.

A cap on the EU budget was demanded – and delivered by David Cameron in February 2013. Nicholson, along with the rest of the UUP, drifted away from the Conservatives as the Parliament’s term went on. The Tories supported his re-election campaign in 2009 but will now be campaigning against him in 2014.

As expected, Sinn Féin’s manifesto prioritised Irish unity which would also include introducing the euro in the North. It also wanted to reduce the power of the Commission and increase the influence of regional and national legislatures. Other commitments included a guaranteed minimum income, opposition to genetically modified crops and nuclear power, and action on climate change – de Brún’s major passion. 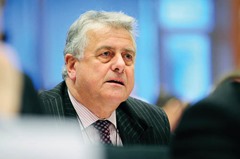 All three local MEPs opposed the Lisbon Treaty, which was approved by the Republic’s voters in October 2009. The ratification of the treaty led to the appointment of two new EU leaders: the full-time President of the European Council (Herman van Rompuy) and High Representative for Foreign Affairs and Security Policy (Catherine Ashton).

The second Barroso Commission took office in February 2010, with the UK being represented by Ashton and Ireland’s Máire Geoghegan-Quinn holding the R&D brief.

Europe was already in the midst of economic crisis and had already seen its first bail-out requests in late 2008 from Hungary and Latvia. Contrary to popular belief, the bail-outs did not begin in the euro zone as both countries had their own national currencies.

When Greece’s financial crisis came to a head in May 2010, the future of the euro zone appeared in doubt. The Irish bail-out later that year brought the crisis much closer to home amid vocal opposition by Sinn Féin to the conditions attached. Ireland’s efficient progress caused considerable hardship at home but rebuilt its reputation abroad. Its exit in December was hailed as a success – Portugal, Greece and Cyprus remain in their bail-outs and Spain’s banks rely on EU funding for support.

When agendaNi visited Brussels in June 2010, MEPs were still settling into their routine. The general atmosphere was upbeat whereas on our next visit in October 2011, there was a more serious tone. Diplomats warned about Europe closing in on itself as the crisis continued.

De Brún made her final speech in the Parliament on 15 November 2011. The forthcoming climate change summit in Durban, she said, must “provide a path for the scaling up of climate funding for the period 2013-2020 and provide appropriate long-term funding to support a low carbon future for developing countries so that they do not go down the same dirty path of development.”

She attended the climate change talks in Durban in December but became unwell in the new year and announced her resignation on 3 May 2012. Martina Anderson, an OFMDFM junior minister, was nominated to succeed her on 17 May. By-elections do not take place for local European Parliament seats as they do not allow for proportional representation.

Anderson first addressed the Parliament on 4 July and cited the 1921 Anglo-Irish Treaty to criticise the European Fiscal Compact, which had been backed in an Irish referendum in May.

“Liam Mellows said of another treaty that it had passed not because of the will of the people, but because of the fear of the people,” Anderson remarked. “Engendering fear seems to be the response of the EU’s institutions to the ever-growing resistance – expressed in votes and in protests – to the failed policies of austerity.” 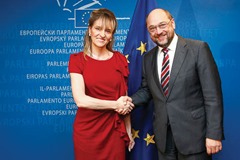 Anderson has repeatedly called for more public investment in growth and jobs rather than austerity. Her priorities have also included a well-funded Common Agricultural Policy, a Peace IV funding programme, a binding youth guarantee for decent jobs and training, and EU strategies on gay rights, domestic violence and childcare.

Plans for EU integration and enlargement proceeded as the economic crisis continued with Germany pressing for a banking union to avoid further crashes. Estonia joined the euro in January 2011, followed by Latvia in January 2014. Croatia joined the EU in July 2013 as the twenty-eighth member state. The union’s neighbours were often troubled with the speed and scale of the Arab Spring taking observers by surprise and political turmoil in the Ukraine at the time of going to press.

The Irish Presidency of the Council of the European Union in January-June 2013 gave Northern Ireland high level access at the heart of the EU, especially as the CAP deal was being finalised. In an unexpected turn of events, Northern Ireland also hosted the G8 summit in June which also brought senior EU leaders to Lough Erne. The visit was brief and the agenda globally-focused but the G8 raised the province’s profile and emphasised the progress that had been made over recent years.

Reforms of the Common Agricultural Policy will result in the single farm payment being replaced by three new compulsory payments from 2015: the basic payment, greening payment, and young farmer payment. A flat rate payment regime is to be phased in by 2019.

Among European politicians, the concept of supporting agriculture through public funds is usually seen as above question despite its heavy financial cost and the state’s strong intervention in the market. Farmers will receive around 40 per cent of the EU budget in 2014. New Zealand, in contrast, has no farm subsidies although its reforms have resulted in small family farms being replaced by much larger holdings.

Northern Ireland receives £250 million in single farm payments each year. The fisheries sector is much smaller and reform proposals here include a ban on discards, a multi-annual management system and transferable catch shares.

In 1914, European countries ruled or dominated most of the world. A century on, the continent remains the world’s richest region but the credit crunch and the rise of emerging economies means that its global influence is decreasing. The population of Europe stands at around 600 million people: around 8 per cent of the world’s population.

Shares of global GDP, calculated by the International Monetary Fund, highlight some of these global shifts. Europe held 33 per cent in 2007 but fell significantly to 25 per cent in 2013. The USA experienced a gentler decrease over the same period, from 25 to 22 per cent. China’s economy almost doubled with its share rising from 6 to 12 per cent.