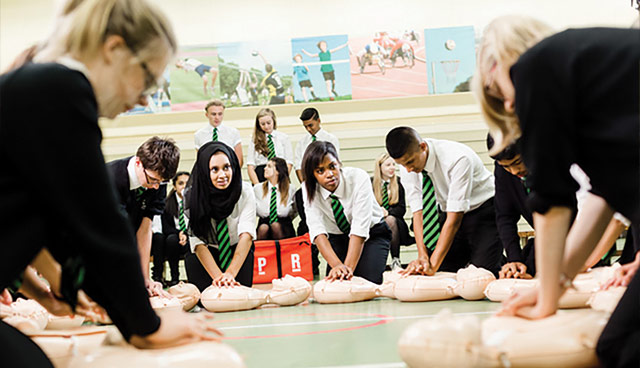 Every year in Northern Ireland, 1,400 people suffer an out-of-hospital cardiac arrest, but less than one in 10 of them survive to return home to their family. British Heart Foundation Northern Ireland (BHF NI) believes that if cardiopulmonary resuscitation (CPR) training was made mandatory on the school curriculum here, then these survival rates would improve dramatically.

There’s a lot of confusion around cardiac arrest. Most people don’t fully understand what it means, or know the difference between a cardiac arrest and a heart attack. The two terms are often used interchangeably, as if they’re the same thing. Yet knowing the difference, and what to do, could save someone’s life.

A heart attack happens when one of the coronary arteries supplying blood to the heart becomes blocked. The heart is still sending blood around the body, and the person usually remains conscious and is breathing. Sometimes a heart attack can lead to a cardiac arrest.

A cardiac arrest is caused by an electrical problem in the heart, which stops it from pumping blood around the body and to the brain. Someone who is having a cardiac arrest will suddenly lose consciousness and will stop breathing or breathe abnormally. Unless immediately treated by CPR, every minute that passes decreases their chances of survival by around 10%.

Denise McAnena, Public Affairs and Policy Manager with BHF NI, said the evidence shows people are hesitant to act when someone they are with suffers a cardiac arrest:

“Research commissioned by BHF NI in 2018 found that over a third of adults are not likely to perform CPR if they saw someone suffer a cardiac arrest. People either don’t know what to do or worry about doing something wrong.

“The vast majority of out-of-hospital cardiac arrests occur in the home, which means it’s usually a parent, spouse, sibling or friend who has collapsed in front of you. Watching those minutes tick by and being unable to take action is devastating. That’s why we want everyone to have these lifesaving skills.”

BHF NI wants all young people to be taught CPR and defibrillator awareness in post-primary school. Currently, Key Stage 3 pupils in Northern Ireland have the opportunity to develop an awareness of emergency first aid procedures; however, this does not go far enough.

Denise said if CPR training was included as a mandatory part of the curriculum, then lives could be saved: 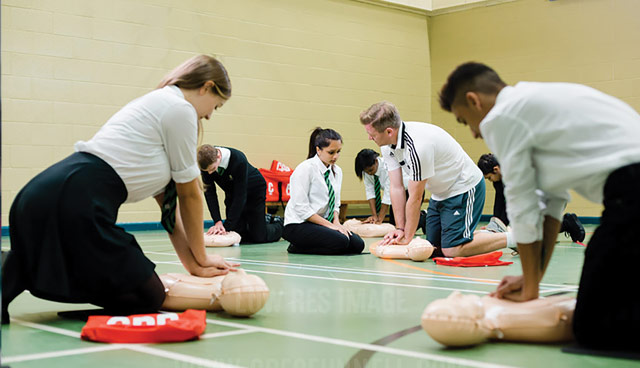 BHF NI recently welcomed Dr Freddy Lippert, CEO of Emergency Medical Services in Copenhagen, to Belfast for a major summit on the issue. He shared the successes and lessons from Denmark, along with Professor Bernd Böttiger and Dr Andy Lockey from the Resuscitation Council. Belgium, France, Italy and Portugal have joined Denmark in adding CPR training to the national curriculum as well as numerous states in America.

Denise added: “The World Health Organisation (WHO) endorsed the ‘KIDS SAVE LIVES’ statement in 2015 that recommends two hours of CPR training annually from the age of 12 years in all schools worldwide.  This statement highlights the importance of teaching CPR to all school children around the globe.”

BHF NI is one of the lead organisations in the provision of CPR training equipment and placement of defibrillators in the community. BHF provide free ‘Call Push Rescue’ CPR training kits to eligible secondary schools, which include a class set of manikins and a watch and learn training film.

This means sessions can be run by teachers, pupils or other staff in the school, anywhere, at any time. BHF Call Push Rescue CPR teaching materials include fully accredited lesson plans, teacher presentations and a quiz for testing learning.

“The Call Push Rescue kits are at no cost to the schools and can be taught in a lesson,” said Denise. “In a landmark move earlier this year, the UK government announced that CPR will be added to the national curriculum in England.

“Adding CPR training and defibrillator awareness to the curriculum would help ensure that every child leaves school knowing how to save a life, empowering them to become responsible citizens. This knowledge of life-saving skills encourages confidence and adds to children’s belief that they can make a difference to society.” 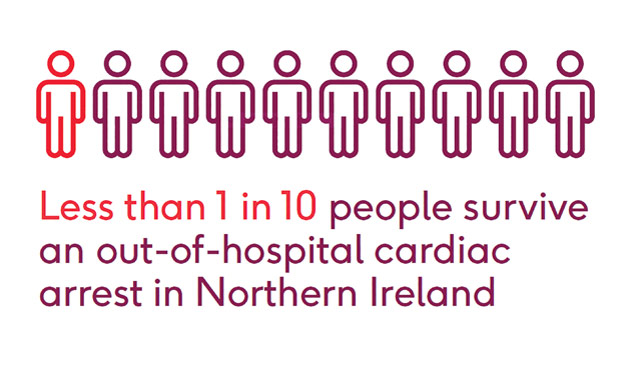 Call Push Rescue training kits are also available to the business community for a small fee and they can then be used over and over to train staff and communities.

The Department of Health developed the Community Resuscitation Strategy for Northern Ireland in 2014. The aim was to increase survival for those who suffer an out-of-hospital cardiac arrest by having more people in the community trained to perform CPR and to use an automated external defibrillator.

The Strategy recommended that all schools should be encouraged to provide CPR training to pupils twice during their school career: once while in primary school and once in post-primary education.

Denise said: “Too many lives are lost because the general public lack the skills and the confidence to quickly perform CPR. The Community Resuscitation Strategy is currently being implemented by the Northern Ireland Ambulance Service and their sterling work will no doubt make a huge difference to survival rates.

“We believe that this implementation coupled with mandatory CPR training in our post primary schools will save hundreds of lives. We all have a part to play in tackling Northern Ireland’s poor cardiac arrest survival rate. You do, too. If you suspect someone is having a heart attack or a cardiac arrest, call 999 straight away and begin CPR immediately. It could mean the difference between life and death.”

You can find out more and watch our CPR videos at bhf.org.uk/cpr. To discuss buying CPR training kits for your workplace, contact Órla Clarke on clarkeo@bhf.org.uk.