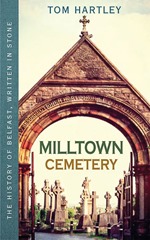 Tom Hartley, author of a new book on the history of Milltown Cemetery, talks to Owen McQuade about Belfast’s chequered past and how our history is much more complex and layered than many appreciate.

There are two “big” themes that emerged from Tom Hartley’s new book on Milltown Cemetery. The first is perhaps the best known: politics. “That is a well-known story. There are also the politics of the island including the British army, many of whom died in World War One. There are also RIC men killed in the 1920s buried there as well. There are soldiers who fought against Franco and who fought foreign. And the many killed over the last 30 to 40 years,” says the former Lord Mayor of Belfast.

The other big theme in the book is the infrastructure and development of the Catholic Church in the late 19th century. “You see that with individuals such as Bishop Patrick Dorrian, who was very driven and brings Milltown into being as the cemetery for Catholics in Belfast. He also brought the religious orders to the city – Christian Brothers and the Dominicans,” observes Hartley. “In essence there was an infrastructure developed which had a political and social effect, with the Catholics getting their foot in the door of this, then, Presbyterian city.”

The book looks beyond the individuals buried in the cemetery to the social dynamics of the city of Belfast and throws up many contractions to the narrative of a divided city: “Paradoxically, while the status and influence of the Catholic community was obstructed by a powerful unionist block on the Belfast City Corporation, the painters and actors of the Belfast Catholic community were aided by an intellectual and creative group of citizens who were, for the most part, descended from the big industrial families of those who had created the engineering base of the Belfast economy.”

Another theme is around the arts and creative industries. The last harp-maker in Belfast, James McFall, is buried in Milltown as is Frank McFadden who made uilleann pipes, along with many musicians including members of the McPeake family. There are also many actors from the 1940s and 1950s such as JG Devlin, Elizabeth Begley who appeared in many television series from ‘The Likely Lads’ to ‘Harry’s Game’ and Albert Sharp who starred in the Walt Disney film ‘Darby O’Gill and the Little People’. There are many artists including Gerard Dillon and his friend Dan O’Neill whose paintings can be found in the Ulster Museum and Trinity College Dublin but is buried in an unmarked grave. 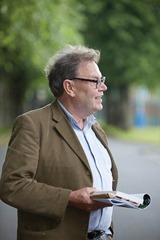 When asked if there any surprises in researching and writing the book, Hartley reels off a list of contradictions. “Neeley Hunter, a Protestant married to a Catholic woman and signatory of the Ulster Solemn League and Covenant, is buried in a cemetery associated with Irish nationalism and republicanism.”

“Marcus Hill Babington who was from a well-known Protestant unionist family and was a doctor during World War One and later converted to Catholicism,” he continues.

“There are the two Corr sisters from the Ormeau Road in Belfast who were republicans and were involved in the 1916 uprising. They had one brother in the Australian army and another in the Canadian army. In one family, you have both an imperialist narrative and a republican narrative.”

Another surprise for Hartley was the size of the Italian community in Belfast. Italian names found on headstones in Milltown include Angelone, Cafolla, Forte, Fusco, Morelli, Raffo, Rossi and Vella.

Hartley’s previous book was on Belfast’s City Cemetery. When asked about the differences between both these cemeteries (very near to each other on Belfast’s Falls Road), he says: “The City Cemetery has the graves of those who shaped Belfast. The great industrialists such as the Harlands, the Gallaghers, Samuel Davidson who founded the Sirocco works, the Mackies and James Pirrie who was responsible for the building of the Titanic – the big names of Belfast’s late Victorian industry. These unionist industrialists shaped the city and created its wealth.”

“At the same time in Milltown, you see a very small Catholic middle class. I have a sense that the sons and daughters of the Presbyterian mercantile group could put their creativity into things like engineering. That wasn’t open to the Catholic community who saw the only route to society as through the arts. What is more important is that they were helped by the sons and daughters of the mercantile élite. For example, the Gaelic League in Belfast was founded by members of the Belfast Naturalists’ Field Club.

“When you have that fusion you have something dynamic. My theme for the book is that there is no one narrative that tells our story nor does the narrative of Belfast run along parallel lines. It is layered and complex.”

There are proportionally more buried in the poor graves in Milltown than in the City Cemetery. “There are 196,000 people buried in Milltown and 75,000 of those are in the poor ground – over one-third. Although Catholics only made up between 27 to 33 per cent of the population, there are similar numbers of poor buried in both cemeteries.”

“It was a harder book for me to write because in a sense it was me writing about my own tribe,” concludes Hartley. “Coming from the Falls Road you have a sense that you already know the story of Milltown whereas you didn’t have the knowledge of who was buried in the City Cemetery. That was a bigger challenge for me.”