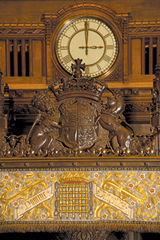 Politicians are well-known for long-winded statements but three time-pieces presented as gifts from Northern Ireland keep MPs’ contributions in check. The Commons chamber was destroyed by wartime bombing in 1941 and subsequently rebuilt and reopened on 26 October 1950.

Commonwealth countries donated a variety of gifts, from inkstands and ashtrays to suites of furniture, to mark the occasion. Northern Ireland also gave gifts, as it had a home rule Parliament i.e. two electric clocks at each end of the chamber by Gent & Co Ltd, Leicester, and a division clock on the clerks’ table by FW Elliott Ltd, of London, which can also be used during debates.

The presence of Commonwealth gifts makes the chamber “a bit of a hotch-potch,” Nigel Dodds told agendaNi, but it captures its essence as the ‘mother of parliaments’. “I suppose they felt a relationship there that they wouldn’t have with other parliamentary chambers,” he comments.

A curator in Parliament confirmed that the electric clocks are linked to a central ‘slave clock’ which ensures consistent timing in the chamber. He noted that FW Elliott also made apparatus for Rolls Royce engines in RAF planes built during the Second World War. The dispatch boxes were donated by New Zealand, the Speaker’s Chair by Australia and the entrance doors by India and Pakistan.

Plans to allow private inquests where intelligence material is involved have been dropped from the Justice and Security Bill, following SDLP pressure. Mark Durkan, though, is still “deeply concerned” about increased secrecy in civil courts. “The Government’s plans have been about trying to make the operations of the security services even more secret again,” he commented.

The Mid Ulster by-election due this autumn is likely to complete Sinn Féin’s plans to end its five MPs’ dual mandates. Sinn Féin MPs will focus on lobbying in Britain and elsewhere for their constituencies and Irish unity. A party spokesman doubted that they would have a dedicated leader and instead saw this move as part of the party’s overall “project”.

They will continue to abstain from Westminster’s proceedings but may be selected again as Assembly candidates in 2015 and may again become ministers, as Murphy and Gildernew have previously been.

In 2011-2012, Sinn Féin received £139,840.19 in parliamentary expenses i.e. £101,004 allocated for “representative business” (an undefined term) and £2,891.59 for travel, and claims of £35,946.60 for constituency office costs. Its MPs receive no salary, as this depends on taking the oath of allegiance. Gregory Campbell, Alasdair McDonnell and Sammy Wilson are the three remaining double-jobbing MPs.

UUP peer Lord Empey has been appointed to the House of Lords’ new Small and Medium-sized Enterprises Committee. Empey, a Vice-President of the Institute of Export, was “greatly honoured” by his appointment. The committee can be contacted by post via the House of Lords or by email at hlsmeexcom@parliament.uk