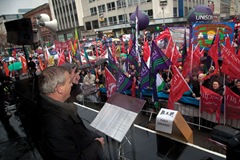 John O’Farrell questions why benefit claimants will pay more towards filling the deficit than banks, and notes different approaches to the spending review within the private sector. Better choices, in his view, could be made.

The second paragraph of HM Treasury’s Spending Review 2010 document opens with the pithy sentence: “The Spending Review makes choices.” It is, by far, the most honest statement in the entire 104-page screed.

What Gideon ‘George’ Osborne announced on Wednesday 20 October 2010 was the surrender of the entire British economy to the whims of a handful of millionaires. Not only the 18 millionaires in the Cabinet.

Since the general election, the Coalition Government has cut over £18 billion from benefit claimants. The investment banks and hedge funds which caused the crisis pay up two-and-a-half billion. However, these same banks will get back hundreds of millions through cuts in corporation tax over the next two years. Coincidentally, the major donors to the Tory election campaign were investment banks and hedge funds. Rupert Murdoch was more supportive, voicing his support at a dinner celebrating the absent Baroness Thatcher.

But other sectors than banking paid into the Conservative war chest. Lord Wolfson of Next gentlemen’s attire, coughed up £293,250 since 2006. He was ennobled last June. Sir Christopher Gent, of GlaxoSmithKline, has given £113,400 since 2003. Plain Aiden Heavey, of Tullow Oil, has so far donated £5,500. All signed a supportive letter to the Daily Telegraph just ahead of the ‘Axe Wednesday’.

Thirty-two others signed the letter of support for the strategy. Bob Wigley of Yell struggles by on £177,000. Ten are on over a million quid, with Mothercare’s Ben Gordon on £6,468,000. The ‘bedrock’ of our economy, the SME sector, was less than impressed.

“Large companies can take these cuts in their stride,” said Stephen Alambritis of the Federation of Small Businesses. “The city will reward them with a higher share price if they reduce their workforce.” On the other hand, “Some small firms rely on public-sector contracts for 50 to 60 per cent of their turnover. If the cuts are swingeing and overnight, these companies will be lost to the UK economy forever.”

£3 billion. Nor are our local small businesses likely to profit from the privatisation of state assets at knock-down prices, when it is difficult enough for them to get modest loans or overdraft facilities from the banks (who are members of the CBI).

Also unimpressed with the CBI/IoD ‘axis of austerity’ is the Construction Employers’ Federation, who last month published a ten-point plan which was distinctly Keynesian. The latest Northern Ireland Construction Bulletin showed a 14.5 per cent decline in construction output since 2009. The last hope for this sector was that the Government would honour its commitments made at the time of the St Andrews Agreement to the Investment Strategy. The Secretary of State told the unions that he would honour the commitment, but Osborne seems not to have noticed. Our local private sector is being undermined at each turn.

Which begs the question: how is the private sector going to fill the hole in the labour market with half-a-million public sector jobs facing the axe? The sight of Liberal Democrats waving order papers and patting Osborne of the back after commending this vandalism to the House of Commons will haunt them to their political graves.

If the Government is proud of the UK’s economic expertise, it has been slow to agree with our latest Nobel laureate, Christopher Pissarides of the LSE: “The situation is not so grave; there is no big risk premium of government debt as in Greece and Spain.”

Yet lesser economists repeat the mantra. On Radio Ulster’s Sunday Sequence, PwC economist Esmond Birnie was asked about the morality of a plan which lays the burden of the deficit onto the least deserving and those least able to withstand the pain – the poor, the ill, young people, women and ordinary working families. Three times he addressed the question. Three times he chanted that “we face a Greek-style crisis” without these measures and that ‘There Is No Alternative’.

The spending review makes choices. Democracy is about choices. Here are some:

• This is the most unequal country in Europe. If we imposed a mere 2 per cent wealth tax on the richest ten per cent, we could raise £78 billion in a single year.

• If we had a Robin Hood tax on speculation and the excesses of investment banks and hedge funds, we could raise billions more, and at the same time we would reduce the rewards for reckless gambling.

• If we employed enough tax inspectors with the same political backing to pursue tax cheats as we have for chasing benefit fraud, then we could raise £123 billion per year in taxes which are evaded, avoided or, unbelievably, not collected.

Vodafone made a deal on taxes recently that saved them £6 billion. You can call that tax efficiency, or you can call it a political choice.

2008’s Nobel laureate has no doubts. “The real reason has a lot to do with ideology,” wrote Paul Krugman. “The Tories are using the deficit as an excuse to downsize the welfare state.”

The good news is that thousands of people agree with this analysis, and demonstrated in the rain against those choices at Belfast City Hall. This argument is only starting.