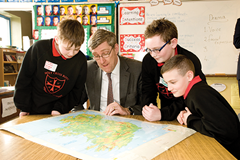 A major consultation on the future of primary schools in Northern Ireland has started and will finish on 30 June. Draft area plans have been published by the five education and library boards. The documents are available at www.puttingpupilsfirst.info and hard copies can also be requested from the boards.

They envisage the closure of 14 schools and the amalgamation of another 34.

“It is my intention that these plans will inform wide-ranging discussion and dialogue at local level,” Education Minister John O’Dowd said. “This is an opportunity for an informed and mature debate that will shape future primary education provision and help identify local solutions that will benefit all children and young people.”

Low enrolments, overspends and poor educational performances were three of the main reasons for proposed closures. The final decision in each case rests with the Education Minister.

DUP Education Spokesman Mervyn Storey said that the Department of Education’s focus on fewer and larger schools was wrong. UUP spokesman Danny Kinahan said: “We must have an overall plan for everyone to work to and that is precisely what this area planning process sadly lacks.” SDLP spokesman Seán Rogers, a former teacher, has asked for assurances that rural communities will have the same access to education services as urban communities.

Alliance’s Trevor Lunn said that opportunities for sharing had been missed. O’Dowd has welcomed initiatives to share school buildings at a local level e.g. between controlled and maintained schools in Moy, outside Dungannon.

Northern Ireland has 846 primary schools and each has been assessed for its viability.