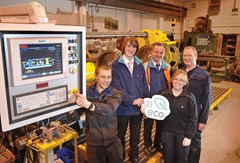 Overall, 78.5 million passenger journeys were made and, through this patronage, Translink removes more than 60,000 cars from the roads in Northern Ireland on a daily basis. This provides a net reduction in local carbon emissions of over 50,000 tonnes per annum.

As a large business with vehicles and facilities throughout Northern Ireland, Translink recognises its responsibility to operate as efficiently as possible. Its strategic approach to sustainable business has received high profile industry recognition including The Carbon Trust Standard, top ‘Platinum’ status in the ARENA Network NI Environmental Benchmarking Survey and a Number 1 Northern Ireland ranking in the Carbon Reduction Commitment (CRC) Energy Efficiency Scheme.

These achievements reflect a company-wide effort to improve environmental performance as the following initiatives demonstrate.

Translink has continued to review its approach to waste recycling, working closely with Wastebeater. Currently, around 90 per cent of all Translink waste is recovered/recycled and the company’s focus is now on reducing and reusing.

Translink has installed energy efficient lighting as well as company-wide installation of voluntary half-hourly electricity metering and converted heating systems to run on natural gas instead of oil.

An employee ‘Go Eco’ energy awareness programme has been rolled out and Translink facilities have delivered a £400,000 saving on energy costs over the past three years.

Water efficiency will also be a key focus in the company’s annual TIDY Translink Awards designed to improve the environmental performance and corporate responsibility of local stations, depots and offices.

Translink’s focus on environmental performance has delivered important business benefits from substantially reducing energy costs year on year to cutting carbon emissions and enhancing the company’s public image. Looking ahead, further investment in passenger transport and encouraging more people to use the bus and train are both essential for continued economic, environmental and social well-being in Northern Ireland.