The creation of a new Ireland will first require a focus on creating a shared island, says Fine Gael TD Neale Richmond, who has set out his detailed roadmap to how Irish unity might be achieved and what it might look like.

Brexit, the Covid-19 public health response, and ambitions of economic recovery have all served as disrupters to what once was the narrative of unification on the island of Ireland. Advocates of and opponents to Irish unity have always existed but as the decades ticked by since partition, the middle ground has tended to lean heavily towards conservatism.

In Northern Ireland, the Good Friday Agreement served to focus minds on peace, politics, and progression, pushing the unity question on to the long finger. In the South, the role reversal of economic fortunes from what once was the affluent north entrenched the mindset of ‘hold what we have’ and limit the risks.

However, the rhetoric around Irish unity has changed in recent years, accelerated undoubtedly by the UK’s exit from the EU and the implication that it has had on the island of Ireland. One such example of that change is a series of interventions by southern politicians in the unification debate.

In April, Dublin Rathdown TD Neale Richmond delivered a paper entitled ‘towards a New Ireland’ to Sidney Sussex College, Cambridge University as part of a wider series of discussions on Ireland’s future. Richmond, a Protestant Fine Gael TD, a grandson of an Orangeman and a regular visitor to Northern Ireland, is a self-confessed long-term believer in a united Ireland but believes that the freedom to talk about a united Ireland has emerged from a generational shift. “My parents’ generation would never have talked about this,” he admits.

Richmond is recognised as having a firm grip on Northern Ireland affairs, not just because of his family ties to north of the border but also through his role as his party’s spokesperson on European Affairs, a role dominated by Brexit. He previously chaired the Irish Seanad’s Brexit Committee and has engaged widely on the subject.

Quizzed on why he has chosen now to publish his vision for unity, Richmond admits that the invite to speak at Sidney Sussex College necessitated him to put his thoughts to paper and a 10,000-word paper ensued.

Previously critical of those who pushed for a border poll as Brexit negotiations were ongoing, the TD, who emphasises his long-standing belief in a united Ireland, says he now feels “comfortable” coming into the discussion. “There is no perfect time to do this, but I think it was a better time to engage in this conversation now, than it would have been a year or two ago. There is a certain element pushing a united Ireland, who have always been pushing it, but they have never put any flesh on the bones. I think it is important to do that. It is what I am partially seeking to do with this paper and something I am hoping to expand on in the coming months.”

Richmond believes that Brexit “has accelerated the ability to have the conversation” by creating a “schism” between the UK and the EU. Pointing to common membership of the EU for Northern Ireland and the Republic as an enabler of the Good Friday Agreement to settle, economically and socially, if not politically, he is critical of the political system in the South for disengaging from “transformative” political activities in Northern Ireland, which has led to a large increase in the middle ground.

“I think Brexit has accelerated the ability to have the conversation because life has changed in Northern Ireland,” he says.

“I would never expect a unionist to vote for a united Ireland, but I fundamentally believe that we must create a new Ireland where unionists are welcomed and ensure they do not feel like second class citizens or that they feel compelled to leave.”

Despite his support for it, Richmond does not buy in to the assumption that unification is inevitable. He does, however, believe that a border poll is inevitable but holds reservations about a positive outcome in either jurisdiction, especially if one was held too quickly.

Put to Richmond that there are some who believe that the swell of southern politicians advocating their support for a united Ireland, while at the same time labelling any moved towards a border poll in the short-term as divisive, is a stalling tactic devised to ride two horses when appealing to the electorate, the TD fundamentally disagrees.

“A border poll tomorrow would probably get defeated. However, even if it were to pass, I would be worried about the implications of a poll being rushed and foisted upon people, be they nationalist or unionist. I make the point very clearly in the paper that we need to have a plan because ultimately, the decision of when to hold a border poll is not our decision but that of the Secretary of State for Northern Ireland.”

Richmond’s paper is comprehensive and includes his vision of a new Ireland in relation to the education, health, and political systems. However, central to his roadmap is the need to first focus on “creating a shared island by building relationships across communities and by truly maximising the institutions provided for by the Good Friday Agreement”.

Expanding on this, Richmond says: “My vision is that if and when, and I do believe it is when, the Secretary of State for Northern Ireland declares that a border poll is necessitated, then a process is kicked in whereby an independent Electoral Commission with an external chairperson is established to oversee the process.”

Richmond envisages the setting out of a date for a poll (suggesting two years from agreement) with two referenda held on the same date in both jurisdictions, with a simple ‘do you agree to a united Ireland?’ question. What a united Ireland would look like would be shaped by both a citizen’s assembly and a dedicated Committee of the British Parliamentary Assembly, before being referred to the Executive Committee of the Northern Irish Assembly, the House of Commons Northern Irish Affairs Committee, and the Oireachtas Committee on the Implementation of the Good Friday Agreement.

Asked about potential timeframes, Richmond believes that the upcoming Assembly election in Northern Ireland means that no border poll will be forthcoming in the next year. In that time, he advocates for two things to happen. The first is the maximising of all of the institutions provided by the Good Friday Agreement and the second is the utilisation of the Government’s recently formed Shared Island Unit, not as a pathway to a united Ireland, but as a tool “towards the genuine betterment of society”.

Outlining why the Taoiseach’s Shared Island Unit shouldn’t be viewed as a method to push out a move towards unity, Richmond says: “If you want a united Ireland, you want both the institutions of the Good Friday Agreement and the aims of the Shared Island Unit to be successful. If you don’t want a united Ireland, you should still want them to be successful.

“We should be hopeful and optimistic for our shared future even if we do not necessarily agree on what constitutional form that future should take.

“We can talk about a border poll and setting a timeframe but unless we are putting energy into breaking down barriers and having that poll, then we’re just talking for the sake of it, and it becomes academic. I am interested in the practicalities of achieving something and achieving it in the right way.”

Richmond acknowledges the “threat” felt by many unionists about such a discussion. Their legitimate aspirations, he says, should be acknowledged but should also not serve to limit contrasting aspirations, allowing what he terms “respectful disagreement”.

“We owe it to society to show that we can disagree without being disagreeable, the same will be true for the varying opinion of how a united Ireland should be achieved and what it should look like,” he adds.

Turning to facilitation of unionists in a united Ireland, Richmond is clear that a 50 per cent plus one quota is enough to see a referendum passed, underlining the principle that all votes are equal. He acknowledges suggestions that a new Ireland could be a federal one, but instead suggests an agreement for a devolved administration for the North, parallel to an all-Ireland Dáil, for an initial agreed period of a decade, which he says should “ensure that the transition to the new state is done so, cognisant of the desire to achieve as great a buy in as possible from all communities”. 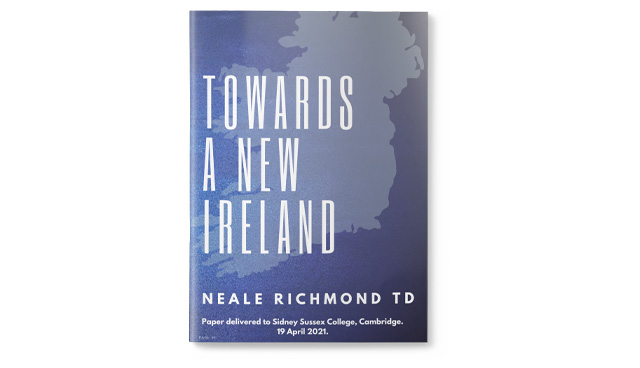 “Ultimately, Northern Ireland’s subvention from Westminster is not something to be proud of but it is also not something that is going to stay rigid, particularly if you pursue an economic programme and an ambitious consolidation for the entire island.”

The TD uses the paper to restate a previously publicly stated and controversial opinion that a united Ireland should apply to join the Commonwealth of Nations. He also believes that the provision for citizens in Northern Ireland to avail of either British, Irish, or both citizenships, must be extended into a united Ireland.

“While I never expect any unionist to vote for a united Ireland, I fundamentally believe that a united Ireland must be a place where unionists do not feel compelled to leave. It needs to be respectful, warm and demonstrate genuine equality of opportunity,” he sates.

The TD is aware that opposition to a united Ireland is not centred in the North alone. A central plank of the argument of those opposed to a united Ireland in the South is, more often than not, the potential cost given that Northern Ireland currently receives around £10 billion per year subvention from Westminster.

Asked for his view on whether Northern Ireland is affordable, Richmond says: “Of course it is affordable but there is going to be a cost and we can’t dismiss that.”

Richmond offers the example of Ireland’s switch from net recipients to net contributors of EU funding by way of showing how opportunities for European funding can be used to change the dynamics of the economic outlook.

“Ultimately, Northern Ireland’s subvention from Westminster is not something to be proud of but it is also not something that is going to stay rigid, particularly if you pursue an economic programme and an ambitious consolidation for the entire island.

“I don’t think we should assume from the outset that a united Ireland would be as costly as the figures are today because there is a way to work through it. The argument I would make is that, like in business, you have to speculate to accumulate. However, this is exactly the type of issue underlining why you can’t rush a border poll. You need to convince people with collegiate and coherent evidence, not back of an envelope calculations.”

Concluding, Richmond acknowledges that his paper is not the solution, but the foundations for discussion on a move towards a new Ireland. While Brexit and Covid-19 may have accelerated the discussion, he is adamant that the underlying issues to be addressed remain largely unchanged.

“Whether or not a border poll will arrive in a near or far future, our island is moving closer together and all residents, regardless of political affiliation, will reap the benefits. United or not, we are certainly moving towards a new island that will benefit us all,” he adds.