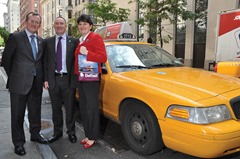 A tourism strategy was drafted in 2010 but has still not been finalised. Peter Cheney considers the reasons for the delay.

The Programme for Government aims to increase tourist numbers from 3.4 million in 2011 to 4.2 million in 2015 but the tourism strategy mentioned in the document is not yet in place.

A consultation on the draft document finished three years ago but Enterprise Minister Arlene Foster has now said that that “there are too many strategies” and a shorter action plan is needed. Foster was speaking in January in response to a question by UUP economy spokeswoman Sandra Overend.

The tourism strategy had been commissioned by Arlene Foster in April 2009 and a draft went out for consultation between February and May 2010. The two key targets were to grow visitor revenue to £1 billion and to grow visitor numbers to 4.4 million (both by 2020).

The strategy was “largely overtaken” by the marketing for the ni2012 year of events, Foster said in January. “It would be wrong if I were to put forward a strategy that was out of date,” she added. Progress on the strategy was held up by lengthy delays in government. In October 2010, Foster said that she would be “shortly” taking the strategy to the Executive. The Minister said in January 2011 that the tourism strategy was “being finalised by the department”. In April 2012, she said that she “would like to have seen the draft tourism strategy through the Executive” but strong tourism promotion was continuing in its absence.

A previous tourism strategy (A Strategic Framework for Action) was published under direct rule and covered 2004-2007. However, it was criticised in the sector for a lack of accountability and little detail on how progress would be monitored.

During the 2010 consultation, there was a consensus on giving more prominence to four marketing areas: food; cultural and heritage tourism; green travel and eco-tourism; and rural breaks (which were seen as just as important as city breaks).

Sandra Overend told agendaNi that a tourism strategy is necessary to co-ordinate government departments and other public bodies, especially when large events are organised.

“Without a strategy in place it is impossible for every facet to work efficiently and effectively together,” she added. “Given that the tourism sector is so important to Northern Ireland at the minute … we must maximise all possible potential in what is a key driver of the economy and a strategy allows that to happen.”

agendaNi asked DETI to explain the absence of the strategy but the department declined to respond. The debate over the strategy coincides with a separate but smaller debate on who should promote tourism in the province.

In October 2010, fellow DUP MLA Paul Givan suggested that several public bodies, including the NITB, could be “amalgamated or brought back into” the Department of Enterprise, Trade and Investment, for efficiency reasons. Foster replied that the issue “is being looked at nationally, and it would be remiss of us not to do the same here in Northern Ireland.”

She also mentioned VisitBritain, a UK Government agency which markets the whole of the UK. Foster considered VisitBritain to be “the equivalent” of the Northern Ireland Tourist Board.

Not surprisingly, Sinn Féin differs. It has long called for an all-Ireland tourism promotion body. This would involve the merger of the NITB (which markets Northern Ireland on the island of Ireland) and Tourism Ireland (which markets the whole island overseas). The DUP is opposed to the formation of new North/South bodies.

Any plans to merge the NITB and VisitBritain also face a legal hurdle. VisitBritain is the brand name for the British Tourist Authority, which was set up by the Development of Tourism Act 1969.

The Act made the authority responsible for promoting England, Scotland and Wales but specifically excluded Northern Ireland, due to devolution. That said, VisitBritain has agreed to help the NITB by promoting Northern Ireland through its website and TV commercials.

Any amendment to extend the Act to Northern Ireland would need to be passed by Parliament. The UK Department for Culture, Media and Sport confirmed to agendaNi that it has no plans to extend VisitBritain’s legal remit.