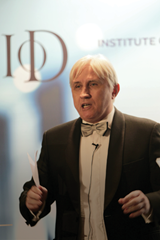 No offence is intended to the litany of ministers, politicos and business chiefs who regularly grace corporate podiums, but can’t the quality of speakers at business bashes in Northern Ireland often be ordinary?

Occasionally, though, you’ll get an organisation which comes up trumps. And in this case the Institute of Directors (and its effervescent chairman Joanne Stuart) must take a bow for introducing ‘local boy made good’ Chris Rea at its most recent soirée.

This wasn’t the Chris Rea of ‘Road to Hell’ or ‘Fool If You Think It’s Over’ fame, but rather the County Down-born, Queen’s University-educated founder of AESSEAL.

The mechanical seal manufacturer, which operates locally from a plant in Lisburn but is today a true global operation, is one of Northern Ireland’s remarkable success stories, yet rarely seems to trouble the headline writers of the business pages.

Born in 1954 and a native of Rathfriland, Chris Rea went to live in south Yorkshire after completing an economics degree at Queen’s in 1975.

He began manufacturing precision engineered mechanical seals for pumps at a Rotherham workshop in 1981 with just five staff, and as Managing Director has grown AESSEAL to a company with 1,268 employees, operating from 73 locations in 34 countries.

Market coverage is global – 85 countries – with the USA accounting for more than a third of export sales. Overseas sales have increased by 107 per cent since 2003, and today around 80 per cent of its entire production is sold overseas.

Just before Christmas, the business smashed through the £100 million annual sales milestone for the first time, capping 30 consecutive years of uninterrupted sales growth (total sales for 2010 are expected to come in at approximately £103 million).

Its growth has been stellar, both organically and by acquisition. Indeed just last September it purchased all of the shares in Ceetak Engineering Ltd and its subsidiary companies to create AESPUMP.

“We genuinely believe this is a rare occasion when the merger of two businesses provides huge positive synergy, and the acquisition is an integral part of our strategy to grow group sales to £200 million in 2015,” Rea said at the time.

The man at the helm puts the company’s success and longevity down to an “unrivalled dedication to quality focus and customer service”, which can be rare in many manufacturing companies.

“Engineering is not a fashionable sector, so it takes something to differentiate you, and we work hard to be different,” Rea told his IoD business audience.

That has led to the company scooping 11 Queen’s Awards for Enterprise. Its numerous recent accolades have included the PricewaterhouseCoopers Customer Focus Award 2010, presented at the Institute of Mechanical Engineers (IMechE) Manufacturing Excellence Awards, four Queen’s Awards in 2009 alone – including one for Sustainable Development – and the UK Excellence Award 2009 (British Quality Foundation), the highest accolade available in the UK.

According to the Queen’s Award office: “AESSEAL receives the Sustainable Development Award for truly embracing the sustainability challenge within the core of its business and pushing the bounds of good practice in sustainable design and manufacture … It not only successfully seeks to reduce its own ecological footprint but also to sustainably produce products which are of evident environmental merit.”

“I believe that a Queen’s Award is the ultimate Establishment to Business Award,” Rea says.

“I am absolutely confident that our association with the Queen’s Awards has been a key motivator for my work colleagues since 1988 and has collectively contributed to our long uninterrupted business success.”

Rea has guided the AESSEAL business through three recessions, but admits: “This is the worst economic environment I have ever experienced in my lifetime as a manager.”

Currently headquartered in Rotherham, the company serves oil and gas, chemical and pharmaceutical, pulp and paper, mining and materials, food and beverage, power generation, water and waste water, bio- ethanol, automotive, and metal processing industries in the UK and internationally.

The company’s independently run Northern Irish subsidiary is known as AESSEAL (MCK) Ltd, and is based in Lisburn.

Rea – a previous Ernst & Young Entrepreneur Of The Year and who, on a personal basis, has featured in past Sunday Times Rich Lists – is in keen demand as a speaker these days.

He has strong opinions, and has often raised concerns at the future viability of the UK as a global manufacturing base.

For example, addressing an international conference last year he warned: “We have no pre-ordained right to the lifestyles we enjoy in Europe, because if governments make entrepreneurs’ lives difficult, we international citizens vote with our feet.

“Too many obstacles to business will drive manufacturing out of Europe and into countries like China. Twice in world history China has been the number one economy, and it looks as though that will happen again in 2020.”

The 400-strong audience who heard Rea articulate his views to the IoD will clearly have enjoyed his unscripted missive. And for other business organisations, perhaps the bar has now been set at a new height.