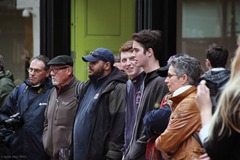 A review of the economic and social impact of The Gathering in the Republic.

2013 was the year of The Gathering as the Irish Government encouraged people to invite ancestral relatives and friends from overseas to attend 5,000 gatherings across the country. The initiative delivered around 250,000-275,000 overseas visitors, growing tourist numbers by 7.2 per cent. The power of personal invitations “helped to strengthen existing links with Irish communities abroad and create new connections,” Tourism Minister Leo Varadkar commented.

Various types of gatherings took place, including a leprechaun hunt and a convention for red-haired individuals. Jennifer Mee’s journey from Florida to Ireland to surprise her distant family was documented in the TV series ‘The Gathering: Homeward Bound’.

In July 2013, a large Mee family gathering took place over three days in Galway. “We’ve had a lot of fun together and connecting our family to all these other families has been wonderful,” Mee related.

The Gathering delivered €170 million in revenue and was “a fantastic experience and a great success, giving a vital boost to tourism and employment,” according to Varadkar. In the first six months of 2013, employment in tourism-related sectors rose by 9,600 jobs. There were 110 business gatherings, 52 of which were created for The Gathering, bringing 9,000 businesspeople to Ireland.

Last year was the best year for Irish tourism since 2008. Six out of ten hotel owners reported increased business as a result of The Gathering. Aviation capacity from the United States was increased by 20 per cent with 270,000 extra seats on new and existing routes.

Varadkar says that Ireland’s status has been restored as a “premier tourism destination.” Visitors were drawn to counties that would not usually be considered tourist destinations. It is thought that future gatherings will likely be held on a five yearly cycle, and hundreds of the events created by the initiative are expected to run annually.

In addition to economic value, its project director, Jim Miley, emphasised the “real momentum” that the community brought to the initiative which “vastly exceeded expectations” with 100,000 local volunteers assisting with various events. The Gathering has delivered a significant social dividend with research indicating that 80 per cent of citizens consider it a source of civic pride.

Varadkar aims to grow visitor numbers in 2014 by 4 per cent and revenue by 8 per cent. New figures have shown that in the first three months of this year overseas visitors increased by 7.3 per cent, a rise of 1.34 million people. Visitors from Great Britain had increased by 11.5 per cent and North America by 6 per cent. The Croke Park Classic American football game aims to bring 20,000 American football fans to Ireland in August. The Minister sees The Gathering as “once-in-a-generation opportunity” leaving an important legacy to be built on.