With a year to go until Northern Ireland’s Assembly election and in a year marking 100 years since the partition of Ireland, political unionism has undergone a significant upheaval in its top ranks.

Having successfully navigated a series of potential political pitfalls, not least the RHI scandal, a three-year absence of Stormont and the outbreak of a global pandemic, the swiftness of the demise of Arlene Foster as leader of the DUP caught many people off guard.

In April, Foster was forced to announce her intention to vacate the leadership post following a coup-like move by the party’s elected members, with 27 MLAs and half its MPs reportedly signing letters to support an unprecedented leadership challenge.

Foster’s decision to abstain rather than vote against a motion in the Assembly, calling for a ban on gay conversion therapy, appears to be the straw that broke the camel’s back, but it is no secret that an undercurrent of disquiet around the party’s handling of Brexit had been simmering for some months, if not longer.

Frustrations that the party, while in a position of power in Westminster, failed to prevent an Irish Sea border were compounded by the implementation of the Northern Ireland Protocol in January 2021.

As a direct consequence of Brexit, the backdrop to Northern Ireland’s centenary celebrations is a swell of people now interpreting the partition of the island as a failure and an increase in discussion and support for a new constitutional future for the island.

Ultimately, it appears that many DUP MLAs were uncomfortable with their hand as they prepare to face their voters ahead of next year’s Assembly election.

However, if replacing Foster as leader was seen as a way of steadying the ship ahead of next year, then little consideration was given to the ramifications of a leadership contest.

Despite attempts to portray the contest as an amicable affair, it is clear the party is divided. 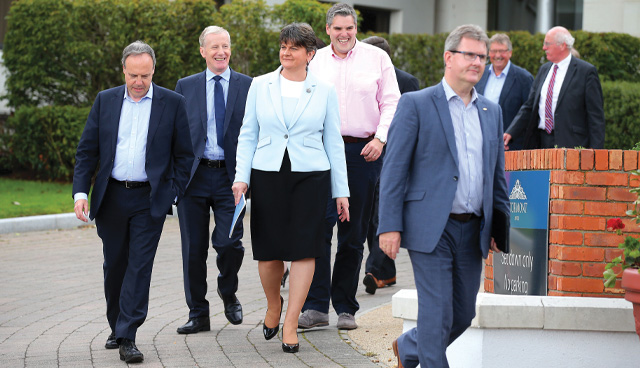 Understandably, there are those within the party that are unhappy with how Foster was removed. Additionally, the two-vote gap between new leader Edwin Poots MLA and contender Jeffrey Donaldson MP, leaves little room for comfort for the new leader and ensures that the threat of contest will never be far from his door.

This was highlighted by the recent meeting to ratify Poots’ leadership. Although, eventually successful, the narrow majority to reject a secret ballot of 56 to 47 was a sign of the levels of division amongst party members. In a night that contained party resignations and the walk out of senior DUP members before Poots’ speech, internal party division spilled out into the public arena, a most unusual occurrence for the party.

Externally, Poots has been slow to implement change. His decision to delay announcing his own ministerial team has been forced by Foster’s announcement that any change to the current party Executive line up would see her resign before the expected date at the end of June. Foster’s resignation would bring to an end the current term of her joint office holder, Sinn Féin’s deputy First Minister Michelle O’Neill.

Both parties would then have seven days to agree new office holders or force a snap election. It’s highly likely that Sinn Féin would use the seven-day period to seek assurances to implement pledges already agreed to under previous agreements, including an Irish Language Act.

It now appears that the new leader would like to engage in these negotiations away from the media spotlight and without the time pressure of potentially forcing an election.

Interestingly, Poots has also not yet moved to change internal party structures and personnel. The RHI scandal unveiled to many the internal workings of a party largely being led by a small number of unelected party officers. In his leadership manifesto, Poots pledged to undertake an independent review of the party’s staffing model, adding that “power and decision-making” needed to be in the hands of the elected representatives.

Poots faces an uphill task to corral party support in the coming year. His deep roots within the party and experience of key ministerial portfolios across several Executives leaves him well-equipped to understanding the nuances of the top role. He has advantages, not least his outspoken opposition to the Northern Ireland Protocol to lean on. However, he also faces challenges to rally the support of more liberal unionists, a noticeable number of whom shifted towards the Alliance Party in the 2019 Westminster elections.

Key to this will be his party’s ability, as part of a collective Executive, to deliver on ambitions for recovery in Northern Ireland. A health crisis, a need for economic reform and action on climate change are just some of the issues facing the party when they go to the doors of the electorate.

Timing was probably the most surprising element of Steve Aiken’s decision to step down as party leader of the UUP. Aiken made the announcement just days after it emerged that Foster would be resigning and left many to question whether the leadership upheaval was in reaction to a wider crisis within unionism.

Unlike Foster, Aiken appeared to walk before he was pushed but undoubtedly the upcoming election was a major factor in his decision. And, like the DUP, Brexit is a major source of contention amidst the party’s grassroots.

Announcing his resignation, Aiken said: “Despite our successes, it has become clear to me that if we are to achieve the breakthrough in the forthcoming assembly elections, we will need to drive further ahead… to achieve our goals, we now need new leadership.”

Aiken’s decision means that the UUP will now have three former leaders within its MLA ranks, a clear indication that previous attempts to rebuild the party’s support have largely failed.

New leader Doug Beattie appears to have given the party a boost in the form of pre-election polling but whether this will hold up when the real polling day comes, remains to be seen.

The ‘Beattie bounce’, as some have described it, is likely to benefit from the split in the DUP. However, there is also a recognition that he must move quickly to capitalise on that division. The new leader will undoubtedly seek to attract the DUP’s disgruntled voters but could also potentially offer an olive branch to the DUP’s elected and non-elected party members to join, and in some cases re-join, his party.

The attractiveness of that switch for former DUP supporters will depend on the UUP’s direction of travel. With both unionist leaders voicing their opposition to the Northern Ireland Protocol, questions have already been asked about whether both parties could target the Alliance Party’s latest vote surge through greater co-operation. Interestingly, Beattie has not ruled out electoral pacts as a future policy for his party.

Beattie’s greatest challenge will be distinguishing himself from the approach taken by Aiken, something which may be difficult when considering Beattie’s prominent position as one of Aiken’s senior team.

Beattie has declined to put himself forward for the leadership role on two previous occasions and was unopposed for the top seat this time. His predecessors were largely unsuccessful in attempts to reverse the party’s electoral decline and there are concerns among the grassroots of the party that Beattie will not spearhead the radical reform needed to reverse the UUP’s fortunes.

Like Poots, Beattie is also opposed to the Northern Ireland Protocol and has called for it to be scrapped. However, the EU appears to be giving little ground on the need for full implementation and both leaders face the prospect of going to the electorate without satisfactory success on what many see as their greatest challenge.

Brexit, however, is far from the only challenge. Health, housing, and climate crises need to be addressed by the cross-party Executive, within which the UUP has one minister. Polls suggest Robin Swann’s popularity is the strongest of any current minister, because of his central role in the pandemic, but failure to make significant progress over the next year could have ramifications for all parties.

Unlike Poots, Beattie has little scope to mark his introduction in terms of a shake-up of ministerial portfolios, with Swann undoubtedly set to be kept in place until the election. Beattie has reshuffled his party’s spokespersons, but he will be aware that a fresh strategy will be needed for the next mandate, with the larger parties likely to feel pressure to opt for the health portfolio as one of their earliest picks.