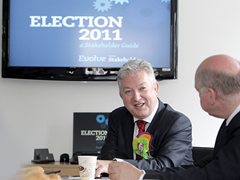 Things in life move through cycles: relationships, businesses, sporting achievement, fashion and, of course, politics. The mores and tastes of society and individuals are in constant flux; they are the “unknown unknowns” which make life interesting.

For organisations, however, “unknown unknowns”, particularly those manifested in the form of government policy, are a threat and an opportunity which can, to a degree, be managed. Passive acceptance is not a strategy, and it’s in this area that the counsel of a good public relations and public affairs company can be invaluable. Companies specialising in public affairs need to be balanced in judgement; too many come from the same political stables and with the same political baggage and outlook. Effective communication requires nous, nuance and knowledge gained from the widest of experiences and perspectives.

Having the insight and skills to influence government and public opinion is a niche occupation. It’s not something which readily flourishes unilaterally in-house. Human nature is prone to that ‘bunker mentality’, viewing the world in absolute contrasts of ‘them and us’. It’s difficult to keep sight of the bigger picture and maintain networks of relationships when your day-to-day job is focussed on the clutter of office minutiae.

Some view the concept of influencing government as an anathema. We do, however, live in a democracy. Engagement between politicians, government and society is not an event like the Olympics which only comes round every four years at election time. It is an ongoing conversation with the emphasis very much on conversation as a two-way process. Politicians like to talk, but the good ones like to listen.

Good public affairs, supported by parallel public relations, is part of that communal conversation. It’s about ensuring that when policy is conceived, it is done so after your voice has been heard.

Whatever your business sector, the chances are that your organisation, not government, is the font of specialist knowledge and expertise. Politicians, by their nature, tend to be generalists. If you don’t clearly communicate the information they need to inform decisions, don’t bother complaining afterwards.

Mackenzie King was a successful Canadian politician during the inter-war years when he clocked up an impressive 22 years as Prime Minister. This was before the so-called era of spin. As befits someone who remained at the top of his game for so long, he understood politics. For him: “Government, in the last analysis, is organised opinion.”

Opinion is there to changed, challenged and reinforced, and at Stakeholder Communications we relish engaging in the great ferment of ideas. Our approach is a holistic one, integrating public affairs and public relations.

We understand that changing minds, particularly the shifting of well-established and publicly proclaimed stances, is not easy. Tactics and strategy will, therefore, differ from case to case, but we work from the basis that most politicians are rational beings. On the whole, they respond to logic and a consensus for change.

Sometimes change requires a change in context, influencing the influencers and that ultimate arbitrator of political action: the voter. For that reason, public affairs and public relations go hand-in-hand. The battle for ideas can be all-encompassing. It’s best, therefore, not to go into battle without every weapon at your disposal. And that starts with the calibre of those you engage.