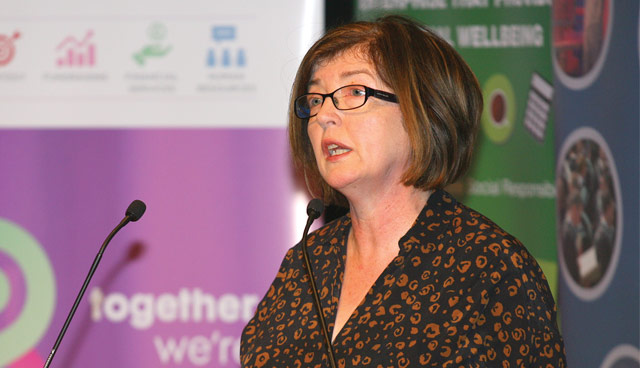 With 20 years of experience working within the Cabinet Office as director-general of the Propriety and Ethics Team, the expertise gained by to senior civil servant Sue Gray places her in a strong position to support Northern Ireland’s social enterprise sector. According to the permanent secretary, working in the region’s Department of Finance represents a realisation of her own passion and ambition for social enterprise.

Welcoming an increased interest in the region’s social enterprise sector, Gray highlights the crucial role of the sector, and her department’s role in supporting it: “The social enterprise sector is hugely important to the Northern Irish economy as a whole. It’s been going from strength to strength over the past few years, which is exciting. But we still have much to do,” admits Gray. “My department, through its role in procurement, is committed to ensuring that opportunities are available to those in the social economy sector by providing guidance and encouraging more public sector bids. I look forward to visiting a number of social enterprises in the near future to see first-hand the great things that have been achieved,” she adds.

As Gray assesses the strength of social enterprise in Northern Ireland, she alludes to an upcoming State of the Nation Report into the social economy sector, commissioned by Social Enterprise NI. “Whilst it hasn’t been published, the emerging findings indicate that the social enterprise sector in Northern Ireland is continuing to grow. It’s worth £480 million to the economy, supports around 17,000 jobs and generates approximately £450 million in wages,” she claims. “So, it is huge, and we must sustain it and help it to grow.”

Sustaining the growth of social enterprise is a core commitment of the Department of Finance, according to the permanent secretary. “The strategic importance of the sector is reinforced under Pillar 3 of the Executive’s Draft Industrial Strategy, which committed to provide support for the sector. I am out of the office two days per week, which allows me to see the fantastic things going on in Northern Ireland. I can also engage with people about the challenges they face, allowing me to consider that when formulating policy and making decisions, allowing their concerns to be taken into account during decision-making.”

“We have encouraged social enterprises to bid for public sector contracts, including the delivery of workshops. They are an important partner to us in delivering public services,” argues Gray, who highlights ongoing work to secure social value legislation in Northern Ireland. “We appreciate that this is difficult without an Assembly and an Executive. But that doesn’t stop us from looking at and preparing different things,” she admits. “We are also exploring options about setting up a Northern Ireland fund to utilise unclaimed assets from dormant accounts. Whilst this hasn’t been progressed, we are looking at ways to open up that money for Northern Ireland’s social economy.

“It is my intention to build on the work of the former Executive to ensure that the fund would align with the wider strategic objectives of the third sector, and there will be more on this soon,” she concludes. “Social enterprises make a huge contribution to the local economy in Northern Ireland. This event has showcased the entrepreneurial spirit of social enterprises, the real difference they make within communities and the amazing work going on in the sector.”