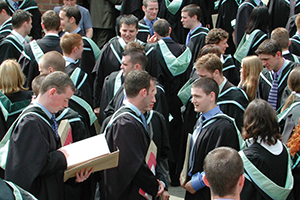 Outside of Northern Ireland, Scotland is the most popular region for local students with 4,160 students enrolled. This is followed by 4,025 students who study in North East England. More females are enrolling than males, accounting for 56.4 per cent of all students in 2014/15. A higher proportion of males (74.3 per cent) were studying full-time than females (71.3 per cent).

Fewer students are enrolling on full-time undergraduate courses; this figure has decreased by 1.4 per cent in 2014/15 on the previous year. 25.5 per cent of students were studying a narrow STEM subject and 47.1 were enrolled to study a broad STEM subject.

Over the past 10 years, the numbers of Northern Ireland students achieving a higher education qualification has remained fairly steady. However, more females are qualifying with better grades than males.

There is also variation in gender in terms of subject area. Females accounted for 83.6 per cent of qualifications gained in medicine subjects, 71.9 per cent in education and 69.3 per cent of those gained in languages in 2014/15. Male-dominated subject areas included engineering and technology (82.9 per cent), computer science (75 per cent) and architecture, building and planning (67.2 per cent).

Education, equality and the economy