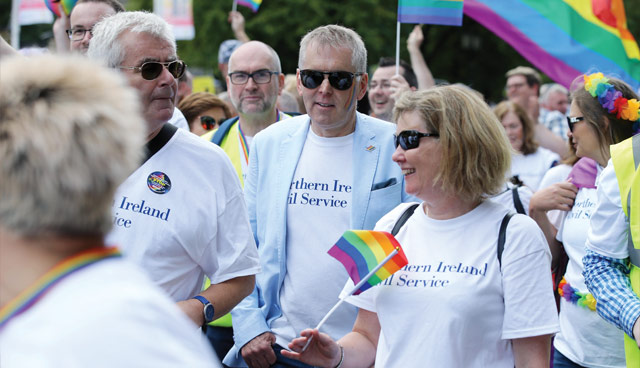 As tens of thousands gather in Belfast’s city centre to participate in annual Pride demonstrations, including the likes of NICS Head David Sterling, the PSNI and leaders from Northern Ireland’s business community, agendaNi assesses the current climate for rights, inclusion and marriage equality in Northern Ireland.

Belfast Pride has undergone some transformation since its first demonstration in the summer of 1991. The fledgling pressure group amounted to a modest 100 protestors as it made its inaugural march through the city centre in defiance of discrimination, hate crime and inequality. Those in participation retreated to LGBT+ exclusive bars in the city in search of a safe space, in what was a fringe and largely isolated movement.

Fast-forward to 2018, and the numbers in attendance suggest a substantial shift in public acceptance: tens of thousands of participants including trade unions, political parties and police officers filled the streets of Belfast in what has become a 10-day festival of over 130 events showcasing the talents and contributions of Northern Ireland’s LGBT+ community. Organisers and commentators claim that numbers at this year’s procession saw a noted rise in attendance – improving on last year’s massive turnout of over 55,000 people.

Despite such large demonstrations of public support for Northern Ireland’s LGBT+ community, organisers insist that Belfast Pride is still a protest, and not just a celebration. Indeed, Northern Ireland remains the only territory in both the British Isles and the island of Ireland not to provide legislation for marriage equality. The region has been highlighted as falling far behind its neighbours in Western Europe, where marriage equality has largely been accepted as a human right.

Such international criticism has added fuel to the debate surrounding marriage equality, which continues to rage in Northern Ireland. The issue has become a major issue of contention, with Northern Ireland’s two largest parties, the DUP and Sinn Féin, diametrically opposed on the issue. Much debate has surrounded the petition of concern, a cross-community veto intended to prevent discrimination which has been used over 100 times in the Assembly on issues including welfare reform, abortion rights and marriage equality. The controversial mechanism, requiring the signature of 30 MLAs, has been highlighted as a key issue which must be resolved to ensure the return of an Executive to Stormont, which is now approaching a two-year hiatus. 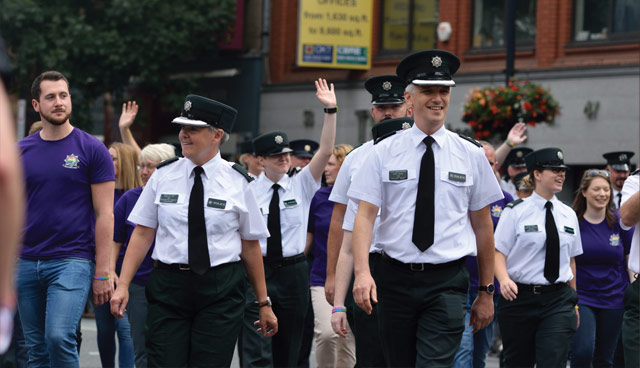 Representatives of the Democratic Unionist Party have been vocal in their opposition to same-sex marriage, in what they describe as a principled defence of traditional matrimony. South Down MLA Jim Wells cut his long-standing ties with the National Trust after their participation in last year’s Pride demonstration, stating that the charity would be “very wise to keep out of controversial social issues which have little of anything to do with its main objectives”. Similarly, Wells branded a recent LGBTQ+ event at Stormont as “an utter disgrace”.

A general distrust between the traditional rivals has complicated political debates on rights-based issues. Unionism has traditionally reacted with suspicion to nationalist and republican proposals on rights, including abortion, the Irish language and marriage equality. This suspicion was compounded last year when former Sinn Féin President Gerry Adams referred to his party’s equality agenda as a “Trojan horse” tactic which would be used to “break these bastards”. More recently, DUP leader Arlene Foster criticised the flying of pride flags on council buildings, describing the move as “a republican ruse” to halt the flying of the union flag.

Some sections of unionism have been more receptive to the idea of marriage equality, however. In a significant move, former UUP leader Mike Nesbitt attended the main Belfast event, signalling his own support for social progress in Northern Ireland. “You cannot watch that Parade and not be moved to join the groundswell for a new, modern, pluralist, inclusive Northern Ireland,” he said. Mike Nesbitt’s attendance at the parade, combined with Arlene Foster’s recent attendance of a Pink News event in Belfast suggest that some quarters of unionism may be more willing than in the past to engage with the LGBT+ community.

Beyond the political arena, groups including the PSNI, several charitable organisations, members of the civil service and some of Northern Ireland’s biggest employers have signalled their support for Northern Ireland’s LGBT+ community. Officers from the PSNI made a return to Belfast Pride for the second year in a row, despite facing criticism at last year’s parade for marching in uniform.

In attendance at August’s demonstration was David Sterling, who currently leads the Northern Ireland Civil Service. Sterling posted a tweet in support of his colleagues: “Delighted that #myfirstTweet as Head of the NI Civil Service is from @BelfastPride. As an employer to 23,000 people, the NICS respects and values diversity and is committed to delivering an inclusive workplace for all our people #NICSdiversity #ComeOutforChange”.

Whilst LGBT+ rights remain on the table in Northern Ireland, legislative progress on the issue depends largely on the presence of a functioning Executive at Stormont – a prerequisite that seems increasingly remote in the current political climate.