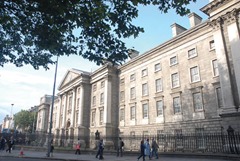 Although many areas of North South co-operation are characterised by cross-pollination, sharing and harmonisation, one area which has been moving in the opposite direction is third level education. Specifically, the ever-reducing number of Northern Ireland domiciled students attending the Republic’s third level education colleges.

The proportion of Northern Irish students attending universities and colleges in the south has been falling steadily and is now under 1 per cent of the total number enrolled; students from the Republic account for 7 per cent of places in Northern Ireland.

While there are many contributory factors to this, including not least the relatively high cost of living in Dublin and differentials in student finance, the biggest single factor is the recalibration of entrance requirements and the effective downgrading of A-levels against the leaving certificate (LCE) under the Central Admissions Office third level entry points system.

The problem actually stems originally from the decision in 2005 by UK authorities to upgrade the LCE in terms of its A-level equivalence. Traditionally UK students have undertaken three A-levels and Republic of Ireland students six or more leaving certs. Therefore the UK University and Colleges Admission Service usually treated a LCE subject proportionately, as being 50 per cent of its A-level equivalent. In 2005 UCAS, following a review, upgraded the LCE to two-thirds of an A-level.

On foot of this change in the UK, Trinity College, followed by the other southern universities started applying the new A-level/LCE ratio to their own admissions, particularly in relation to the points requirements for the most oversubscribed courses such as medicine and law. With 150 points for a top A-level and 100 points for a top LCE, most Northern Ireland students could only achieve a maximum of 450 points (nowhere near the 550 plus points needed for the high demand courses) whereas the top LCE students in the Republic could aim for 600 points. To compete with their southern counterparts, Northern Ireland students would have to offer four A-levels even though three is the established norm.

Since the changes were made, it has been extremely difficult for Northern Ireland students to compete for places on the most popular courses in the southern universities and numbers of northerners have fallen sharply.

However, apart from some students and schools crying foul about what they see as the unfairness of the current arrangements, the plight of Northern students has been recognised in high places. Mary McAleese, a powerful advocate of cross-border educational exchange, has pointed out the anomaly and asked the authorities to reconsider the system.

Together with her husband Martin, Chancellor of Dublin City University, the former President has also backed up the words with action and established funding for a series of scholarships for Northern Irish students who wish to study in DCU.

The McAleeses’ critique has not fallen on deaf ears. In February of this year, two Dublin universities (DCU and Trinity) announced that they were reviewing admissions arrangements particularly to assist the admission of northern students into their colleges. Trinity dean Patrick Geoghegan indicated that it would consider “unilaterally adopting a different scoring system for pupils from Northern Ireland.”

Just recently, in July, Trinity unveiled its proposed new scheme which would be aimed at doubling the number of Northern Ireland students admitted. The college indicated that it would now accept northern students with three A-levels provided they were two As and a B or better. The move was warmly welcomed by Northern Ireland’s education and employment ministers and by the Union of Students in Ireland.