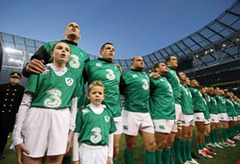 The Irish Rugby Football Union has announced its intention to submit a bid to host the 2023 Rugby World Cup. The announcement was made with the support of the Irish Government and the Northern Ireland Executive. The Rugby World Cup has the potential to attract in excess of 350,000 visitors to Ireland. It is expected that the decision on its location will be taken in mid-2017.

IRFU Chief Executive Philip Browne commented: “Ireland has played a major part in the development of rugby football internationally. Stretching back to the union’s formation in 1879, and right throughout the modern era, Irish rugby has supplied a series of inspirational players and administrators to the international game.”

The bid process will involve the development of a detailed programme, covering match schedules and venues, accommodation, international access, internal transport, communications infrastructure and community involvement. It is anticipated that the delivery of the bid will cost €1.5 billion. The GAA has previously agreed that it would make its stadia available for the matches.

First Minister Peter Robinson commented: “Infrastructure is key to this bid and the Northern Ireland Executive has already invested £14.7 million in the redevelopment of the home of Ulster Rugby to redevelop and expand the capacity of the stadium.”

An Taoiseach Enda Kenny stated: “Ireland will put together a winning bid that will be impossible to resist. We have the fans, the stadiums, and the accessibility to make it a world cup to remember. Irish people love our sport. We are passionate about sport and we celebrate it.”