News that the PSNI’s GAA team may have to fold because of falling numbers has again raised questions about the diversity of the organisation now and into the future.

Held up as a symbol of the reform undergone by Northern Ireland’s police service, the creation of PSNI GAC in 2001 came about just a few weeks after the switch from the RUC to the PSNI which prompted the GAA to remove ‘Rule 21’, banning members of the security forces from joining the GAA.

However, despite growth in its early years, PSNI GAA has suffered from falling numbers amidst a wider recruitment struggles in the organisation. The Irish News recently reported that the PSNI hurling team hadn’t played in a number of years and the football team had played just two matches this season.

The decline of numbers appears to correlate with the ending of 50:50 recruitment in 2011. The policy, which ran for 10 years, successfully increased the number of police officers from a Catholic background from 8 per cent to 31 per cent.

Of late, the PSNI has struggled to sign up Catholics and recent figures showed that Catholics make up only one in five admissions in merit-based competitions. Those figures recently led the PSNI’s Deputy Chief Constable Stephen Martin to float the idea of a return to the 50:50 policy. 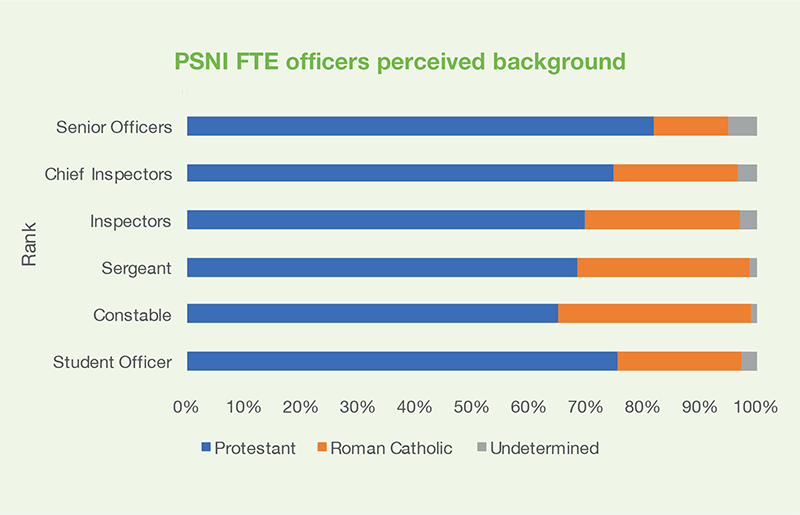 Recent attempts to address the reasons behind the low numbers of Catholic application have included an independent report by Deloitte commissioned by the PSNI to identify recruitment barriers. Understanding barriers to police officer recruitment identified a number of barriers such as pay reduction and lack of awareness of the variety of roles offered; however, its headline finding centred on Catholic underrepresentation and highlighted recognisable barriers such as physical appearance at test centres and community perception as key turn offs.

However, as figures show, the PSNI’s challenge does not simply lie in recent recruitment figures but also in a legacy of underrepresentation, most acute at its senior levels. 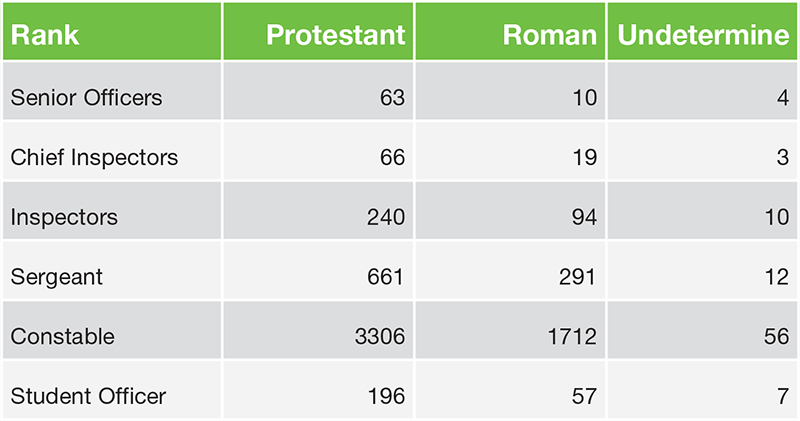 The highest levels of integration of Catholics in the PSNI non-civilian FTE ranks is at Constable level, where almost 34 per cent of officers are Catholics but this figure drops again at Student Officer level to under 22 per cent.

In a recent interview with agendaNi, Head of HR at the PSNI, Yvonne Cooke stated her belief that current figures are not fully representative of ongoing work for change. Pointing to a better understanding of the barriers to recruitment through the Deloitte report, Cooke said that efforts had been applied to recent campaigns, such as the introduction of early stage online testing.

Cooke joined with Martin in suggesting that Catholic underrepresentation in the PSNI is a challenge that requires support and effort from external stakeholders in Northern Ireland.

Whether addressing under-representation will be a priority for new Chief Constable Simon Byrne remains to be seen. Any changes to the recruitment process in the form of positive discrimination would likely require political sign-off. Quoted recently, Byrne said that he felt the PSNI was “not yet back at the point” where it needed to reintroduce the 50:50 recruitment process.