Two elections, a global green surge, climate change awareness on a new scale, two Brexit deadlines and taking on the reigns of the Green Party leadership have made for a busy year for Clare Bailey. David Whelan talks to the MLA about her first year at the head of the party and its future direction.

In November Bailey will mark a year as leader of the party, a year which she describes as “feisty and challenging”. Although relatively new in her role, Bailey has been a household name and leading face for the Greens since she took up membership of the party in 2010 and her eventual election to the Assembly in 2016.

Describing her new role as both “challenging” and “rewarding” Bailey talks warmly about the Green Party’s recent electoral feat at local council level, where they not only increased the amount of Green Party councillors to eight, but also established party groupings in Belfast City Council (4) and Ards and North Down Borough Council (3).

“We had a fantastic council election which produced not only a real upsurge in our vote but brought about better returns as well. Those party groupings allow us in to places where previously we haven’t had access,” she says.

Bailey describes the growth of the party and of its internal structures as the highlight of her year to date but is well aware that this has been done surrounded by immense challenges of “Brexit entrenchment and Stormont absence”.

The MLA has already led the party through local and European elections this year, with the potential of a UK General Election on the cards before the end of the year. Quizzed on whether this has had an impact on her and her party faithful’s motivation to continue challenging the current electoral status quo, Bailey says: “Undoubtedly the snap nature of the recent elections has meant challenges in managing our approach, but enthusiasm has never been short in our party. I’m extremely grateful that our members have never needed geared up to get out and knock doors and talk to the electorate about the Party’s ethos and priorities. I’m also grateful for their efforts as we are a small team and a lot of hard work is being done behind the scenes to enable our growth.”

Enabling growth of the party is the explanation given by Bailey for her somewhat unexpected decision to step down as the Party’s deputy leader in 2017, only to take on the leadership a year later. Discussing the move, the MLA says: “I had been deputy of the party since 2014 and when elected as an MLA I decided to take stock. As a party we had been through a few development stages and my election meant we now had a second MLA and a surge in our membership. We were looking at how best to utilise our membership’s experiences, talents and skills to continue that growth. Given that the MLA role came with a profile of its own, I saw an opportunity to create space for someone else to add to the party’s voice.”

As it happens, Bailey says that the Party’s stalwart Steven Agnew’s decision to step down as leader in 2018 came as a surprise to most. Party leadership, she explains, was not a prior-held ambition before the opportunity arose. In fact, the woman who took almost 10 per cent of the first preference vote share for Belfast South, in the hotly contested 2017 Assembly election, says that a desire to enter politics only came about from the experience of a turbulent life.

Born in Clonard in west Belfast, Dutch speaking Bailey, thanks to her mother’s job facilitating disadvantaged children to visit the Netherlands, has openly spoke of her experiences as a single mother on benefits, experiencing homelessness and going through university as a mature student.

It’s not that we are moving away from environmentalism or our core principles, we’re just getting more voices and stronger messaging opportunities.

Bailey and her sister Elaine were founder pupils of Lagan Integrated College in 1981, two of 28 pupils who experienced daily protests and had an armed RUC guard for their first day of school given the level of outrage at the challenge the new school was putting up to the religiously divided school system.

“My background shaped my desire for change,” says Bailey. Having spent a lot of my childhood in the Netherlands I had an experience of multi-cultural Europe, which was a stark contrast to the dark days of the Troubles. That combined with my life experiences led me to believe that I could deliver change to help people and improve their lives.

Bailey has been a vocal opponent of austerity and has campaigned strongly to bring about change to legislation on gay marriage and abortion decriminalisation in other areas, amongst other things. To this end, she has assisted on placing a green stamp on a wider variety of issues, helping to extend the party’s appeal.

We continue to live in a divided society, still have an ongoing peace process and our legacy challenge still exists and so it has taken some time to build confidence in trust in the electorate to give us their vote.

Often wrongly perceived as a single-issue party, especially in the past, Bailey is quizzed on whether her influence has seen the party shift its focus to the social agenda rather than those core environmental issues.

“That’s not an assessment I hold to,” she states. “Joining a political party and nailing your colours to the mast at the time that I did was a huge deal for me but I chose the Greens because I thought they fitted me and I fitted them. I felt that I could learn from them and at the same time they could learn from me.

“Environmentalism is at the heart of everything we do, along with sustainable development, peace and non-violence and grass roots democracy, the core pillars for any Green Party in the world. While we have different policies given that we are in different jurisdictions, we hold true to those principles and our policies are shaped around them.

“As the party has expanded, so too has our voice and where previously we had that one identifiable figure in Steven, my election and the elections at local level have enhanced our ability to share our message. It’s not that we are moving away from environmentalism or our core principles, we’re just getting more voices and stronger messaging opportunities.”

Globally, a ‘green surge’ has taken place amidst growing awareness and concern about climate change. The surge was particularly noticeable at local elections in Ireland and Great Britain. Despite noticeable success for the Green Party in May’s election, the ‘green surge’ didn’t quite manifest itself in Northern Ireland.

“I think there was an element of that climate awareness evident in our success but I also think there was another fundamental element of a lot of groundwork in previous years. In the past we have struggled to convince people that our message is as relevant as that of the bigger parties. We continue to live in a divided society, still have an ongoing peace process and our legacy challenge still exists and so it has taken some time to build confidence and trust in the electorate to give us their vote. We have had to work hard for that and we’re seeing the outworkings of hard work and delivery, especially from Steven’s work in the Assembly.

“On the environmental side, this year, for the first time, we are knocking doors and people are telling us about their environmental concerns. There’s a much wider recognition and a lot of young people influencing an older generation in homes across Northern Ireland. We’re seeing with the school strikes, for example, young people asking the adults to work to protect their futures and that protection is what we want to encourage.”

Protection for future generations is one of the driving forces behind Bailey’s recent letter to pro-remain parties in Northern Ireland for a conversation around electoral strategy in any upcoming Westminster election. She cites existing consensus in some areas, such as the backstop as the “least worst option”, as good reason to discuss electoral pacts and adds: “these are extraordinary times in politics they deserve an extraordinary response.”

Although highly likely, Bailey does not go as far as to say that she would be the party’s candidate in Belfast South, explaining that the party have not yet started the selection process. However, asked if she would be willing to step her party aside in the event of a pact in their core areas of south Belfast or North Down, she adds: “I would be prepared to do what is necessary. We’re still talking to other parties and most have engaged but no firm decisions have been taken given that an election has yet to be called. Getting more voices representing all of Northern Ireland in Westminster is the ambition.”

Bailey recently welcomed new MLA Rachel Woods to join her as the Green Party’s representative in Stormont following the departure of Steven Agnew and describes her as an “energetic, enthusiastic and empathetic” welcome addition to Stormont.

Staying with the devolved institutions she describes it as “highly frustrating” that those institutions were collapsed shortly after her own election and at a time when she was beginning to find her feet. While she believes she and others have had to reinvent the role of an MLA to some degree, she highlights that work continues to effect change. 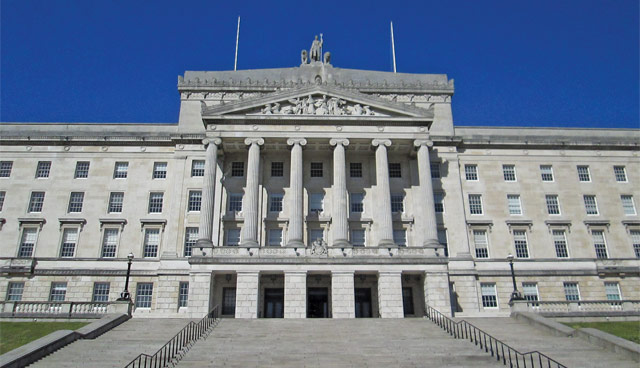 “There is always opportunity in a vacuum. I come from a campaigning and activist background and that work has never stopped. The limitations on local accountability and decision-making have forced us to look elsewhere.”

Bailey alludes to work with parties in Westminster, particularly Labour, to ensure Northern Ireland’s interests are served. She credits such work with the recent introduction of amendments to the Northern Ireland (Executive Formation and Exercise of Functions) Bill which could see same-sex marriage legalised and abortion laws liberalised on 21 October.

However, she also believes that a continued absence of Stormont and divided politics increases the risk of missing opportunities to address overarching challenges, such as those around climate change.

“No matter what your political outlook is, environmental challenges are important. If you’re a unionist then you should be concerned that Boris Johnson’s latest plan to maintain the union ignores the all-island approach to the Waterways Directive and the Natural Habitats Directive, for example. These things know no borders and will affect us all.

“If you’re a nationalist and seeking a new or a united Ireland then there needs to be a political ownership of a conversation around the climate change agenda. A new Ireland is coming and it’s called climate chaos. How do we react to this?

“Such a conversation needs to be had north-south and east-west. They also needs to be had with our European neighbours and this narrowing of focus down to binary choices of identity politics is helpful for no one.”

Bailey rubbishes the latest plans put forward by the Prime Minister to achieve Brexit, describing its proposal of a four-year opt-out veto for Stormont as “keeping Northern Ireland in a hamster wheel of Brexit” and as “undermining any ability of business in Northern Ireland to future-proof of forward plan” and does not believe it will have support from the EU or within Westminster.

Concluding with her vision for the year ahead, Bailey outlines a desire to expand the party structures through increasing the number of constituency groups and continuing to work with the party membership. Looking outward, the MLA says that whatever shape Brexit takes, “the Green Party will continue to work with fellow greens across Europe and utilise their connections globally”.