Two major public broadband projects aimed at increasing connectivity throughout Northern Ireland at a combined cost of over £35 million may not have achieved value for money, a Northern Ireland Audit Office report has found.

In his report looking at two historical broadband schemes across the region, Northern Ireland’s Comptroller and Auditor General, Kieran Donnelly, shows that the Department for the Economy considered an initial bid from the provider to improve access to just 38 per cent of its original target as value for money.

The Comptroller and Auditor General has also raised concerns, based on the uptake rate of both schemes greatly exceeding expectations, over whether public subsidy was necessary for the schemes.

The report assesses two projects, in the form of the Northern Ireland Broadband Investment Programme (NIBIP), which involves laying fibre optic telephone lines from existing exchanges to new, small broadband exchanges in rural areas, and the Superfast Rollout Programme (SRP2), an extension of the NIBIP which involves laying new fibre optic telephone lines to cabinets and in some cases to premises, in areas across Northern Ireland.
Telecommunications is not a devolved power and is a UK reserved matter, meaning that it is controlled centrally by the UK Department for Digital, Culture, Media and Sport (DCMS). Responsibility for the management, governance and oversight of programmes delivering improved broadband across the UK lies with Building Digital UK (BDUK), a directorate within DCMS.

In 2010/11, BDUK introduced the UK-wide state-aid Superfast Broadband Programme, recognising that it would be more appropriate for delivery to be managed in partnership with local bodies, including the Department for the Economy.
To assist with this, BDUK developed a National Framework, allowing local bodies to appoint suppliers without conducting individual open tender exercises. Despite early interest, only two bidders were appointed as framework providers in June 2012.

By March 2013, Fujitsu announced its removal from the process, meaning that BT was the sole bidder on the framework, eligible for appointment by local bodies in the absence of competition.

This meant that by the time the Northern Ireland contracts were awarded, only one bidder remained on the framework.
“With competition eliminated and BT dominating the 2012 framework, we consider that BDUK (and contracting local bodies) had limited assurance that value for money was being achieved,” the Comptroller and Auditor General states.

Criticism has been levelled at the framework, including from the UK’s Public Accounts Committee (PAC) and the Committee for Culture, Media and Sport (CMSC) who flagged a lack of competition, limited cost transparency and the inclusion of non-disclosure agreements in contracts.

The report found relying on contractors to self-certify that costs were “internally consistent and consistent with its commercial investment” was not an adequate control.
In February 2014, the NIBIP offered £19.3 million in public subsidy for Northern Ireland. The Department’s original expectation was for the project to improve connectivity to almost 117,600 premises but BT’s initial proposal was for a guaranteed 45,259 premises, 38 per cent of the initial expectation.

As a result, the original scheme objective (to provide universal access to speed of at least 2Mbps) had to be amended (to refer to providing 2Mbps to 96 per cent of premises).
DfE acknowledges that the projected delivery fell short of its original expectations but says that its economists verified that the bid represented value for money. However, the Comptroller and Auditor General says that given the shortfall, “we cannot conclude that the NIBIP achieved value for money”.
“Performance through the NIBIP fell well below DfE’s original expectations of delivering broadband to 117,600 premises and, in fact, only ended up improving broadband access to 37,500 premises. This was also below the outputs specified in BT’s initial and revised bids. Given this disappointing performance, it is not possible for us to conclude that the NIBIP delivered value for money,” the report states.
The contract for the SRP2 was awarded in February 2015 and initially offered £14.5 million in public subsides. DfE envisaged that the subsidy would facilitate increased connectivity to 20,947 premises (84 per cent across Northern Ireland). BT anticipated that superfast broadband could be provided to 38,921 premises (increasing access across to superfast broadband to 87 per cent). However, details of its outcome are not yet available, with the Department stating that BDUK has not completed its final stage assurance process. 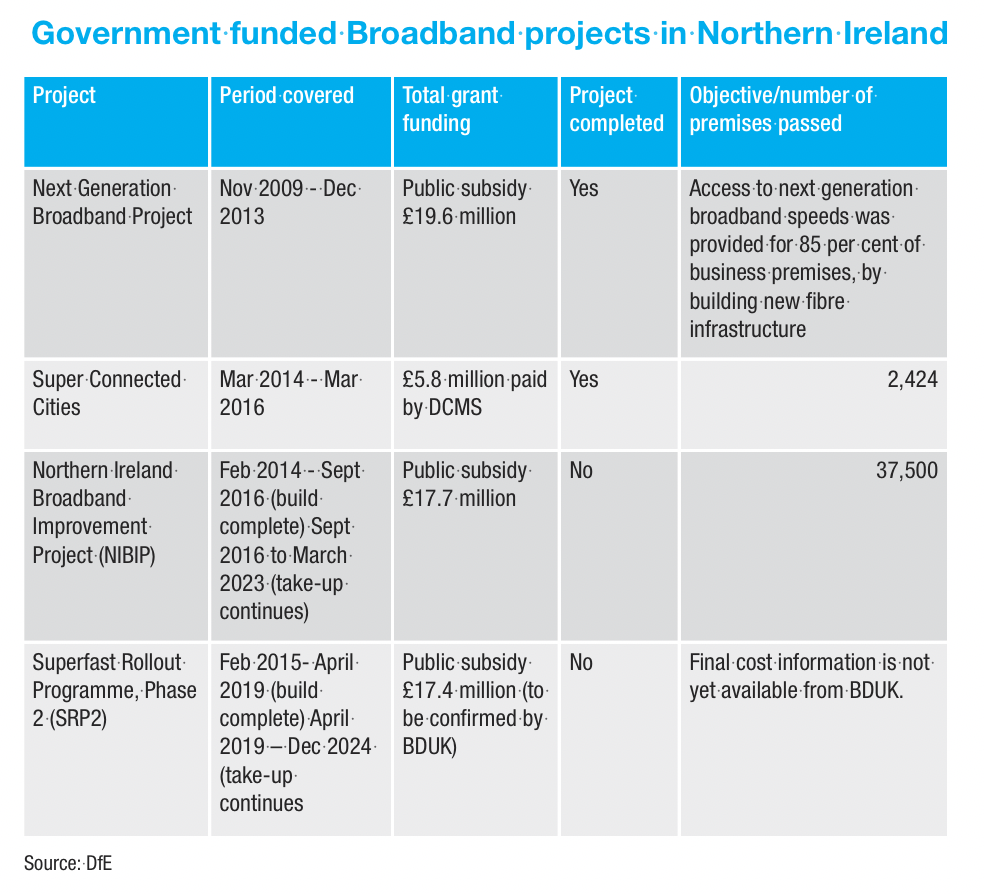 Take up of the NIBP (66 per cent) and the SRP2 (33 per cent), were well in excess of the 20 per cent expectation rate. As a result, DfE is entitled to some clawback of BT profits and an estimated £14 million is due to DfE from BT, of which £1.7 million has been paid.

Commenting on suggestions that high take-up rates raise questions over whether either project could have been commercially viable with significantly less public subsidy, Donnelly states: “While I note that there are mechanisms to claw back part of the public funding, I consider that these high take-up rates could indicate that both projects would have been financially attractive to the private sector even if less public subsidies had been provided.”
In November 2020, the Department for the Economy awarded a contract for the £165 million Project Stratum, aiming to improve broadband connectivity for just over 76,000 predominantly rural premises in Northern Ireland.

The project was not procured under the DCMS Framework Agreement, which lapsed in 2016.
“It is vital that Project Stratum, involving £165 million of public subsidy, finally provides an appropriate broadband solution for those rural homes and businesses in Northern Ireland which are still dealing with poor digital connectivity,” stated Donnelly.
“I note the Department for the Economy’s assurance that Project Stratum was procured using an open tender process rather than the framework which had lapsed in 2016, and there are built in controls to ensure full transparency over costs. I intend to report on the award of the contract for Project Stratum later this year.”
Northern Ireland currently has access to broadband, at speeds of up to 30Mbps, lower than any other region of the UK. However, Northern Ireland’s access to ultrafast broadband, at speeds up to 300Mbps, rose higher than the UK average in 2020 and 56 per cent of Northern Ireland premises had access to full fibre compared to the UK’s average of 18 per cent.

Broadband access for rural areas in Northern Ireland is considerably less than for urban areas. 63 per cent of rural premises had access to superfast broadband, compared to 98 per cent in urban areas.
Highlighting how connectivity challenges have been compounded by the pandemic, Donnelly summarises: “The Covid-19 pandemic has brought into sharp focus our increasing reliance on the internet to communicate, work, learn and shop. Many in Northern Ireland have faced Covid-19 lockdowns with inadequate access to broadband services, and while any improvement in broadband infrastructure is to be welcomed, my report raises significant issues.”