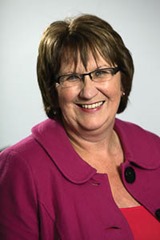 SDLP MLA Dolores Kelly has represented Upper Bann in the Assembly since 2003. She was previously a member of Craigavon Borough Council (1993-2011) and has been the party’s deputy leader since 2011.

Dolores is the SDLP’s social development spokeswoman. She worked as an occupational therapist before entering elected politics and is married to Eamon with four children.

I always had an interest in politics, history and current affairs. I always believed in non-violent protests, equality and the principles of social justice. My first experience of active politics was when I joined the anti-apartheid movement at university. In later years, I was asked to join my local parish council. I was elected as the chairperson of the parish council. However, this was a fairly easy election as there was no opposition! We organised many community events and did a lot of work to help the local community.

In 1993, I was approached by the local branch of the SDLP and asked to run as a candidate for local council elections. At this point, I was in my early thirties, working full-time and had three children under the age of nine with another on the way. However, I felt very strongly that I wanted to try to make a difference and to make a better future for my children so I agreed to stand for council and was very lucky and privileged to be elected.

And what made it into a full-time career?

In November 2003, Bríd Rodgers was the SDLP MLA for Upper Bann and she decided to stand down. I had the honour of then being selected as the candidate for Upper Bann in the upcoming Northern Ireland Assembly elections that year. I was gained my seat and was re-elected in 2007 and 2011.

What is unique about Upper Bann?

Upper Bann is spread over three counties: Armagh, Down and Antrim. It sits on the south and south-east shores of Lough Neagh. It has three main town centre hubs and there is a mix of both urban and rural towns and villages. Lurgan, at the heart of Upper Bann, boasts the second largest park in Ireland after Phoenix Park in Dublin. Upper Bann has the honour of having two teams who have won the All Ireland Championship: Armagh (2002) and Down (1994).

Upper Bann has a uniqueness of its people. They are a very useful population who have a great spirit of generosity. There is a wonderful sense of self-help and community involvement. There is a great sense of resilience among the people of Upper Bann as they have lived through many bad times during the Troubles, much like the whole of Northern Ireland. Sadly, many parts of Upper Bann are still divided. 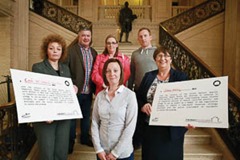 What do you count as your main achievement?

I am very proud to have been associated with many successful projects from buildings to projects that have brought people together. I am most proud of having the privilege of giving local people a voice. I believe that I am approachable and I think that people would agree that I haven’t forgotten where I came from. I am also very proud to hold the position as deputy leader of the SDLP.

In general terms, how can the current deadlock be overcome?

I believe the only way that the deadlock can be overcome is if all sides live up to their obligations. Leaders must lead and deal with all of the issues that need resolved instead of cherry-picking those issues that matter to them most. We need a comprehensive agreement covering how to deal with all aspects in the past and the leaders must show a spirit of compromise and trust to be able to move forward.

How do you spend your free time?

As I work very anti-social hours, in my free time I love to catch up with my family. In October, I became a grandmother for the first time and I am thoroughly enjoying spending time with and spoiling my perfect little grandson.

My father is in his eighties so I spend a lot of time with him, looking after him and preparing meals for him.

As well as family time, I enjoy spending time in the garden, especially in the summertime.

I am an avid reader and love a good thriller to get my teeth into. I also try to get out and about on my bike as and when I can and I really enjoy cycling around the country roads taking in the beautiful views of Lough Neagh.