Minister Poots, whose department launched a public discussion document as a preparatory step in bringing forward what would be Northern Ireland’s first climate-specific legislation in December 2020, took the unusual step of publishing a departmental statement to voice his disappointment at the progress of a Private Member’s Bill, also aimed at introducing climate-focused legislation.

The Minister claims that the Bill, which recently passed its second reading after 58 MLAs supported its progression following a six-hour debate in the Assembly, would have a negative impact on the environment and the agri-food sector. A total of 29 MLAs opposed the Bill’s progression.

In a statement released by his department, Poots said that the progression of the Private Member’s Bill had been done “without any regard to either the long-term sustainability of our hard-working agri-food sector, nor the long-term achievability of the environmental targets and commitments contained within the Bill”.

The Minister also claimed that “unachievable deadlines and unreasonable demands” would disengage farmers.

Until the Private Member’s Bill was introduced, Northern Ireland was the only region of the UK without its own climate legislation and, as it stands, contributes to wider UK reduction targets.

In January 2020, the New Decade, New Approach deal to restore the Northern Ireland and Executive and agreed by all five main parties, pledged to bring forward a Climate Change Act to give environmental targets a strong legal underpinning. A month later, the Assembly followed the UK’s decision in 2019 and declared a climate emergency.

On 21 July 2020, the Assembly passed a motion on the introduction of a Climate Change Act within three months. Around the same time Minister Poots had said that officials in his department did not accept the terminology “climate crisis” or “climate emergency”. However, following criticism, the Minister received an apology from his Permanent Secretary for the briefing he was given and Poots has accepted that there is a climate crisis.

Poots described the three-month timeframe to introduce legislation as “impossible”, stating that he was committed to action and not words.

In response, Green Party leader Clare Bailey submitted a Climate Change Bill to the Assembly in October, which she said had cross-party and cross-community support.

The Bill, drafted by Climate Coalition NI, a coalition of academics, lawyers, environmentalists, NGOs and youth organisations, sets out a 2045 net zero greenhouse gas emissions target for Northern Ireland and establishes a legal framework, including five-year plans for emissions cuts. However, the Bill does not specify the level of reductions required across various sectors. Instead, it proposes these be set by Executive departments and would require Assembly approval. 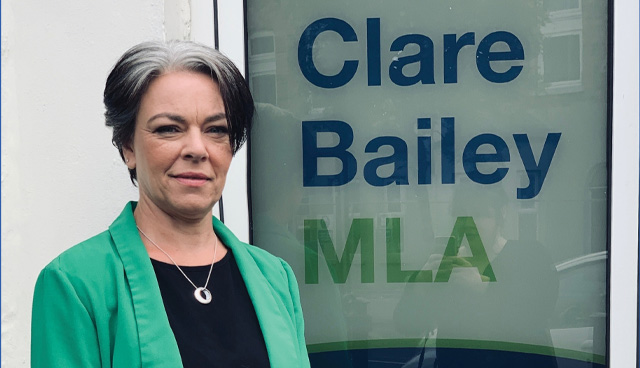 The Bill also proposes the introduction of a Climate Commissioner to oversee progress on departmental targets.

“My take on the Bill is clear and consistent in that it is both ambitious and achievable. Ambitious because it needs to be and achievable because it is a governance framework Bill without sectoral specific targets,” says Bailey.

Minister Poots says that he has tabled policy proposals for discussion at the Executive, which he says need to be heard as soon possible so that he may introduce an Executive Bill to the Assembly.

It is understood that one of those policy options to be put forward by the Minister, and the one most likely to be recommended by the Department, is for a target below net zero carbon.

In December 2020, following a request to Minister Poots, the Climate Change Committee (CCC), the UK Government’s advisory body, responded with an assessment of Northern Ireland’s required contribution to the UK’s net zero carbon by 2050 target.

The CCC indicated its assessment that an 82 per cent reduction in all greenhouse gases in Northern Ireland “represents equivalent effort and a fair contribution to the UK net zero target”.

The CCC advice was highlighted by Poots in his statement opposing the progression of the Private Member’s Bill: “The independent experts of the UK Climate Change Committee have categorically stated that a net zero target by 2050 for Northern Ireland covering all greenhouse gases cannot credibly be set at this time.”

Highlighting “major concerns” around the potential outworkings of the Bill, Poots pointed to “the apparent disregard” of advice from the CCC and inclusion of the 2045 target. He also suggested a lack of consultation on the Bill compared to his “proper” consultation and accused the sponsors and drafters of the Bill of providing a lack of evidence and impact assessments.

Finally, the Minister flagged potential “significant costs” to the public purse when implementing and meeting the requirements of the Bill, which he says will “serve to push our emissions overseas rather than having a contribution to the reduction of overall global greenhouse gas emission”.

He added: “We don’t need just any climate change bill. We need the right climate change bill that sets out an achievable pathway for Northern Ireland to contribute to the wider UK and global efforts for greenhouse gas emissions reductions.”

The Private Member’s Bill will now pass to committee stage in the Assembly.