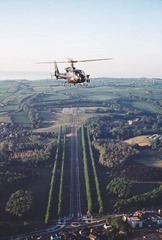 A three-month visit in 1980 gave National Geographic photographer Cary Wolinsky a fascinating insight into life in Northern Ireland. He shares his tales of the Troubles and the province’s constant potential with Peter Cheney.

For many journalists and photographers, a Belfast beat at the height of the Troubles meant a flying visit or going straight to the scene of the latest incident. A young American photographer, though, took time to see a more rounded view and has vivid memories of the place more than 30 years on.

Cary Wolinksy visited Northern Ireland for three months in 1980, to prepare for an article that was published in April 1981. Now aged 66, he has shared many of the stories and insights from the notes of his visit with agendaNi.

This was his first trip and he later returned for a story about textiles and the linen industry.

“National Geographic, in those days, did tend to revisit places every 15-20 years.” The next story on Ireland came out in 1994 to mark the early days of the Celtic Tiger and its format marked “a sea change in the direction of National Geographic.”

The magazine had previously “tended to cover things in a very encyclopaedic way” and that was how the 1981 piece was worked up: “You would do an aerial picture. You would do some pictures that would show the landscape. You would talk about their major industries, so it was like a geography book.”

It was, as he recalls, his “first time in a war zone” and preparations involved a massive amount of reading about Irish history. He was fortunate to meet David McKittrick, then with the Irish Times, who gave him some ground rules for reporting Belfast. The first question that would come up was: “Who’s side are you on?”

“Well, I’m not on anybody’s side,” Wolinsky replied. McKittrick continued: “Well, of course you’re not but everyone will want you to declare because in a time of mistrust, no-one trusts someone who is not on one side or the other. They won’t believe you.”

His second piece of advice was to meet with someone from the British army and someone in the IRA. Wolinsky relates: “The British said: ‘Never be seen with anyone from the IRA.’ And the IRA guy said: ‘Never be seen with the British army.’” Both said: “We don’t know what to tell you to do because reporters usually come in here when there’s trouble and then they leave the next day. You’re going to be here for three months. We can’t really give you an accurate plan of action.”

As time went on, he found a strange paradox between being “on edge at all times” but still being made “really welcome” by everyone he met. The long-running history of conflict “had left the country somewhat isolated from the rest of the world and in many, many ways left it backward and charming – as often ‘high water’ countries are.” The same could be said about Dagestan, a war-torn region of southern Russia. 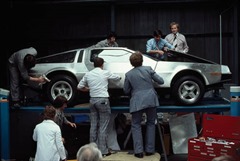 Wolinsky surmises: “If you go to places that kind of get ignored for one reason or another, the traditions hang on longer, the charm hangs on longer but also some of the things that are negative hang around longer because people aren’t as open or as exposed to the rest of the world.”

Compared with its competitors, the National Geographic was picture-driven. “We weren’t illustrating somebody’s story,” Wolinsky comments. “They were writing to our pictures.”

As photographers were given three times the budget and time, travelling with the journalist was impractical. He can’t recall meeting the reporter (Bryan Hodgson) but his wife came over to visit and was “just bowled over” by the North Coast. A keen gardener, she was also impressed with Mount Stewart.

Hearing Ian Paisley speak was “a really frightening experience” but meeting Catholic constituents only added to his confusion: “I was really naïve about politics but I had time for this one woman, who was one of his constituents, who said: ‘He takes good care of me. He responds when I go to see him.’”

The 12 July bonfire celebrations were “really frightening to see and it was a hard place to photograph because people seemed completely out of control on alcohol.”

Covering the funeral of 16-year old Michael McCartan was “a very sad moment.” The boy had been shot by an undercover RUC officer while painting graffiti near the Ormeau Road.

One other incident made his blood run cold. As Wolinsky was watching children rioting in West Belfast, he saw a French photojournalist “paying the kids to throw Molotov cocktails near him so he could get good pictures.”

He reflects: “I thought this has become a media circus where the media has now become an active player in perpetuating the Troubles because the more dramatic the pictures, the more inflamed the population.”

He also met the artist Brendan Ellis, whose paintings were inspired by the Troubles, and Mayoress of Derry Marlene Jefferson – an Ulster Unionist and a rare female politician. 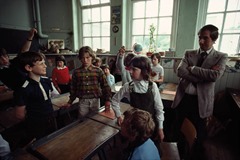 David McKittrick was “a constant mentor” and had “a very mature view of how to operate as a journalist in that environment … I give him a lot of credit for my being able to stay there as long as I did and he did make a lot of introductions.”

On his last day in Northern Ireland, he went out on foot patrol with soldiers and afterwards the army blew up the car that they used – a Mini – “because they said that it was identifiable … I don’t know if that’s true but that’s what they told me.”

The entrepreneur Dr Jasper Parsons was the “kind of person that, like, despite everything that was going on, showed this unflagging optimism.” Parsons enthused about growing the best oysters in the world in the clean waters off Northern Ireland.

Harland and Wolff was experiencing major growth and was emerging from the hard times of the 70s. He also had the chance to cover wave energy research at Queen’s which “seemed to have so much promise at the time.”

Shorts was performing well but the DeLorean plant’s fortunes seemed more ambivalent. “I photographed the first DeLorean to roll off the line,” Wolinsky recalls. “It didn’t actually roll off the line. They had to push it. They didn’t get it started which didn’t bode well, I thought, for the company.”

Sion Mills Primary School was described to him as the “only fully integrated school”. While this may not have been entirely accurate, cross-community schools were certainly rare. The owners of the local mill, the Herdman family, would “hire people and keep them on the condition that there were no troubles on Protestant-Catholic lines.” The 100-year old school building was to be demolished and a new one built by 1982. The children would then go to a Protestant or Catholic secondary school but at least spent their first years learning together.

Throughout his visit, he rented a cottage and travelled extensively around the countryside. His basic impression: “Gosh, if this country ever gets over its problems, this is one of the most beautiful places in Europe. I’m looking at the things like I photographed like Mount Stewart Gardens, Lough Erne and the Sperrin Mountains.”

A flight with the army over Belfast on 16 May 1980 proved fascinating. “The helicopter is a constant sight and sound over Belfast,” Wolinsky wrote. “Foot patrols moving around the city are watched by helicopters to help discourage sniper attacks and give support if necessary.”

He tells agendaNi: “That was really, really a rich day of visuals in part because seeing any place from a helicopter is always interesting and exciting. The thing about a helicopter is you can move as slowly as you want to.

“You really get to look at stuff and can try and peer down into a neighbourhood. I kind of had a feeling for the bones of the city: these mill districts with their row houses. At the time, there was still smoke in the air in places. There was a very, very strong feeling of its history.” Parliament Buildings “looked abandoned” and “felt like a relic of power rather than something powerful.” 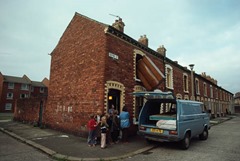 The pilots had an “extremely isolated existence” in the barracks and were “much more focused on this gigantic expensive toy that they’re flying.” Their position in the sky “made them fairly immune” and they “didn’t seem to be aware of what a deep impression their being in the sky all the time would have on a population.”

The Head of the Northern Ireland Tourist Board had one day told him that he had “the hardest job in the world.” The photographer understood this right away.

Wolinksky adds: “Here is this country that’s deeply beautiful and unspoiled, some of the best fishing in the world and with lovely people. And here was this overlay of tragedy that was making it inaccessible and, in some ways, it probably preserved Northern Ireland – its landscape – a lot longer than it might have been but that’s probably the only good thing that came out of it.”

Cary Wolinsky began working as a photographer for the Boston Globe in 1968 while completing a journalism degree at Boston University. By 1972, he was providing photo-stories by freelance to several US national magazines and he has been a contract photographer with National Geographic since the mid-80s. His website is www.carywolinsky.com