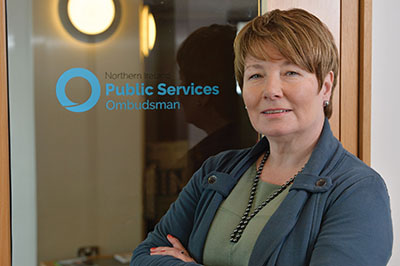 A new Ombudsman’s office for investigating complaints about public services has been launched. The Office of the Northern Ireland Public Services Ombudsman (NIPSO) has been created by the Ombudsman (NI) Act 2016.

The new NIPSO has been given a wider remit and greater investigative powers than its predecessors, and will be able to publish investigation reports in the public interest, investigate complaints about social work decisions, access legal advice that is relevant to an investigation and take any action in addition to or instead of an investigation, such as conciliation.

Other key changes will allow people to complain directly to the office without the need for MLA sponsorship and the introduction of a time limit on complaints. Complaints must be brought to the new office within six months of completing the public service’s internal complaints process.

Commenting on the launch of the new Ombudsman’s Office, the new Ombudsman, Marie Anderson said: “I am pleased and privileged to have been appointed by the Assembly to lead this new office. By ensuring an independent and impartial investigation into a complaint, my aim is to help ensure a fair and efficient public administration for all.

“As Ombudsman it is my role to ensure that the public can easily complain about public services and can expect that their complaint will be thoroughly examined by my staff. I equally recognise the importance of sharing the experience of this office and best practice in complaints handling with the organisations under my jurisdiction to support them in improving both service delivery to the public and their complaints handling practices. It is important that those organisations take complaints seriously and make genuine attempts to resolve all complaints at source. Where that is not possible or a member of the public remains dissatisfied my office will independently assess their concerns.”

The Assembly’s legislation has given the office the power to ensure that public sector providers are held to account for their actions. The ability to publish investigation reports in the public interest is an important power that will have far reaching implications for the public sector as those reports will ensure that the learning from complaints is widely shared.