In a decision agreed by all five parties of the Executive, medical law and ethic expert Melissa McCullough has been appointed as the Standards Commissioner for Stormont’s Members of the Legislative Assembly.

McCullough takes up the post, which has the powers to investigate potential breaches of the code of conduct for MLAs, after it had lain vacant since 2017 Accordingly, she will have the power to retroactively investigate any complaints made against MLAs in the last three years, but recommending sanctions will remain under the remit of Stormont’s Standards Committee.

The post had remained vacant following the end of Douglas Bain’s five-year term in 2017, with the collapse of the Executive meaning that no successor could be agreed. All five Executive parties have now agreed to McCullough’s appointment, which was the first order of business on the Assembly’s agenda when it returned from its summer recess.

McCullough also serves as a director for Belfast design company Designco, a member of Doctor Care Anywhere’s clinical governance board and as a panel assessor and chair for undergraduate medicine with Medical Council Ireland. Prior to her appointment as Standards Commissioner, she also served as a non-executive director for the Belfast Health and Social Care Trust for 11 years, In the past, McCullough has made news after raising concerns about her treatment by a Belfast neurologist who was then suspended by the Belfast Trust over possible misdiagnoses.

The appointment comes after the retired solicitor Paul Kennedy, who was due to take over the role in July, withdrew from the appointment process just days before he was due to take up the role. MLAs had been expected to approve Kennedy’s appointment before the summer recess, but a debate was called off at short notice and it was announced that Kennedy had withdrawn.

Among the high-profile cases of McCullough’s predecessor Bain was the investigation into First Minister Peter Robinson and his wife Iris Robinson in 2014. The investigation exonerated the then First Minister but found Iris Robinson to have been guilty of a serious breach of standards by failing to register £5,000 in payments made to her by property developers. Robinson resigned all three of the Parliament, Assembly and council seats she held at the time.

In his 2016 annual report, the last filed before the collapse of the Executive, Bain warned that the public was losing confidence in the Stormont complaints system and made a number of recommendations to reform the process after the number of complaints he received in a year fell from 53 to 14. These included the banning of the use of the Petition of Concern to stop politicians being punished for breaking rules and the appointment of members of the public to the Assembly Committee. 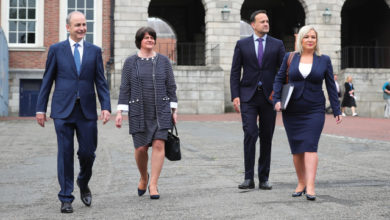