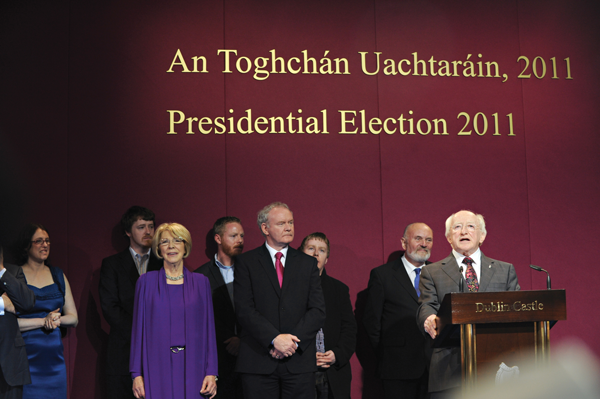 Michael D Higgins has taken over from Mary McAleese as Irish President, while Irish citizens in Northern Ireland will not receive voting rights for the foreseeable future. Meadhbh Monahan reports.

Michael Daniel Higgins, the first intellectual and poet to reside at Áras an Uachtaráin, was elected Ireland’s ninth President on 27 October, receiving 701,101 first preference votes, which increased to 1,007,104 with transfers. This equated to a 39.6 per cent share of the total vote, well above Cavan entrepreneur Sean Gallagher’s 28.5 per cent.

Sinn Féin had hoped for 18 to 20 per cent of first preferences, but McGuinness said he was pleased with the result and the party labelled it as positive. He had added to its historic general election result of 9.9 per cent, and beaten Fine Gael’s Gay Mitchell (who received an embarrassing 6.4 per cent). McGuinness, who was subject to intense media scrutiny about his IRA past, was glad he had “something to do” i.e. return to his post as deputy First Minister.

While Belfast-born Mary McAleese was criticised during her 1997 campaign for her Northern Ireland background, she held the presidency for two seven-year terms and has been praised for leaving a positive legacy which culminated in the visit of Queen Elizabeth II in May 2011.

A presidency of ideas has been promised, and in that vein, Higgins intends to host gatherings of the best minds from Ireland and abroad to take part in discussions on issues such as youth unemployment, emigration and mental health.

The new President, who was born in Limerick but raised by his aunt and uncle on a farm in County Clare, is described as “a thinker unafraid to speak his mind.”

He will mark the sensitive Easter Rising centenary in 2016.

Sinn Féin and the SDLP both want to extend presidential voting rights to the North, although unionists are opposed on sovereignty grounds.

A DUP spokesman told agendaNi: “[Our] view is that the union is secure, and Sinn Féin are now reduced to scrabbling around for issues to enhance their ‘Irishness’,” the spokesman stated. The party’s priority is “bringing society in Northern Ireland together and rebuilding our economy, not issues around voting rights in presidential elections in the Republic.”

A UUP spokesman told agendaNi: “We are part of a separate state: the United Kingdom.” He added: “The Dutch don’t vote in German elections, the Poles don’t elect the German President, the Spanish don’t elect the French President, so why should people in Northern Ireland, a part of the United Kingdom, be able to vote in an election in the Irish Republic?”

Alliance is “very cautious” as the move could have “unforeseen consequences” e.g. allowing for northern votes to Dáil Éireann as well.