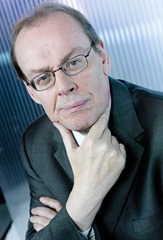 UTV Political Editor Ken Reid has been with the broadcaster since 1994. Here, he reflects on his time in journalism so far and the state of play at Stormont.

How has your career developed so far?

I was always interested when I was at Methody and was involved in schoolboy magazines. Then, when I went to Hull University, I ended up as editor of Hull Fire – a student newspaper. My mentor at uni was Sophie Robinson, the rock singer Tom Robinson’s sister.

A friend of mine, Dessie Houston from North Belfast, was a compositor on the News Letter and knew I was interested. So I got a summer job as a copy boy on the News Letter in 1976. A year later, I was about to have the opportunity to join the Yorkshire Post but the News Letter had a graduate entrant scheme and I got that place that year.

The Cork Examiner was looking at setting up a Sunday newspaper. I felt it would be a good chance to do something different so I moved my wife, two young children and a third child – my wife was pregnant – to Cork in 1987 and I was there until 1994. They decided not to go ahead with the Sunday paper but I was given a very good role as the senior journalist.

We decided as a family to come back to Northern Ireland. I produced the ceasefire programme on UTV in 1994 and two weeks later was political correspondent.

Who would you count as your main influences?

Many. I worked with Jim McDowell right from the start. People like Chris Moore. The late Jim Dougal was a great inspiration and become one of my best friends. When I was at UTV and he was political correspondent at the BBC, we were rivals but we were great friends.

In Cork, TP O’Mahony was a great source to me. Another was Sean Dunne, a poet who unfortunately died at 38. He was very supportive and Liam Moher (editor of the Evening Echo) was very, very helpful.

In UTV, I’ve been very lucky with colleagues but the person who really backed me was Rob Morrison, the former Head of News. John Trew gave me my first job in the News Letter and I’ve always been very grateful to him and stayed in touch with him and Karen, his wife.

How did you find the move from print to broadcasting?

It was just such an exciting period. Being in broadcasting gave you greater access. I found doors opened easier. UTV’s audience was particularly huge – about 2:1 over the BBC – and I think that the main players had identified that they needed UTV.

I had contacts from my past like Alastair Campbell and in the Irish Government. Chris Moore had produced ‘In the Name of the Father’ which brought the Reynolds Government down and I was based in Dublin for many weeks at that time. The Government was teetering and eventually collapsed. At one stage, Albert Reynolds phoned me up and asked: “Have you any more dirt on us, Ken?”

What about the most significant stories?

I suppose Paisley resigning. I’d that to myself and you get those once in a life. I also broke the story that the Assembly elections were being postponed in 2003. That caught everybody wrong-footed. 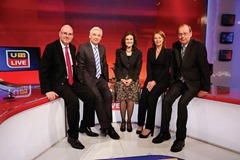 If you look back at the process, most of the political developments didn’t happen in Belfast. They were in London or Dublin and I spent basically 13 years going back and forward to Westminster. It’s only with devolution that I have had a much more steady existence. Perhaps that’s why Haass is going to the two governments so much because nothing happens without the two governments.

How would you characterise Stormont at present?

It’s too big. The reason that it’s 108 MLAs is that Paul Murphy wanted to get, particularly, the UDA represented – but they didn’t get elected. Eventually, through time, the system will change but at the moment it’s caught in a rut.

It has achieved some very good things. The Investment Conference was top notch with Northern Ireland being sold on a very professional basis.

Outside of Northern Ireland, people do see this place as an example for other peace processes but there are frustrations. The fact that Richard Haass has to be brought in underlines the weakness that we have but I do believe that, behind the scenes, there is a recognition that things will have to change.

Do any stories need more attention?

Because there’s no opposition at Stormont, the media has to play the role of opposition. More and more, politicians are being scrutinised but the danger with that is that if you scrutinise too much, nobody of any calibre will want to go into politics.

I think that the media coverage is starting to develop with the process evolving. You see very few newspaper reporters now up at Stormont but I suspect when the Assembly starts pushing through more legislation, there will be greater interest.

You can’t expect people who were councillors suddenly to become great parliamentarians. The encouraging thing is that there is real talent coming through e.g. Simon Hamilton and Daithí McKay. Jim Allister is very smart and very effective as a single MLA. They all rate Jim Allister very highly and quite rightly.

A lot of what happens takes place at Stormont Castle between Sinn Féin and the DUP, and that’s very much kept out of the public focus. With the past, they’ll never please everybody but until something’s sorted, it is going to stunt progress here. There’s no question about that.

Sport is my hobby and keeps me sane. I’m an Everton fan and I’m very involved with Ballymena Rugby Club. I like reading, particularly political stuff, and one of the things that saddens me is the decline of newspapers.

I also love music. I’m big into rhythm and blues – a Van Morrison fanatic – and I like world music. While I have been unwell recently, I cannot fault the excellent support that I’ve received from UTV during that time and I’m deeply grateful for their help.