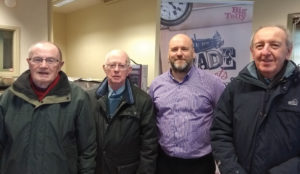 Paul Welsh, Editor of the Newry Reporter has been with the paper for over a decade having initially embarked on a career in retail.

How did you get into journalism?

That’s a very long story that would take you around the houses. I didn’t go the conventional route; my early background was retail management but I always loved writing. I was involved in PR for sport. I was made redundant from the retail business in 1998 before one thing and another eventually led me into journalism and publishing, and finally to the Newry Reporter 10 years ago last July as Deputy Editor. I was appointed Editor in January 2013.

Is there such a thing as a typical working day? I like to be in the office by 8am to get the desk and emails cleared, and sort out photographer bookings. Mondays and Tuesdays are given over to production with the paper in some of the local shops by 7.30pm on Tuesday evening. Wednesday begins by meeting with the company directors for a review of the week’s paper. Then it’s planning for the following week, dealing with invoices/budgets and you roll into Thursday and Friday when it’s working on the following week’s paper.

I tend to take a few hours off here and there in the latter half of the week but I work at home most nights and will usually work on a Saturday morning and Sunday night – particularly on my own stories. The weekends are great for getting work done as there are far less distractions like emails and phone calls and it means we can hit the ground running first thing on a Monday.

Who would you identify as your role models in the industry and why?

I wouldn’t say I have any role models as such. There are journalists whose work I admire – Sam McBride in the News Letter; and Connla Young and Allison Morris at the Irish News. I also like the way the BBC’s Seamus McKee and Mark Carruthers go about their interviews; they don’t take any nonsense, particularly from our politicians.

What is it about journalism that you enjoy?

Seeing the paper go out each week. There is a huge amount of satisfaction from seeing the finished product on the shelves. It’s the culmination of a long week of hard work from our journalists and production team, and it’s out there to be judged by our readership.

There’s also the thrill of nailing a story – something that you have been working on that comes together and gets people talking.

What would you describe as your most notable story or project?

I spent almost three years investigating and reporting on a £2.5 million project at a school in Newry, which was funded by Sport NI, Department for Social Development and our (then) local Newry and Mourne District Council.

It culminated in an investigation by the Northern Ireland Audit Office, resulting in a 42-page full report, which vindicated the work that I’d put into the investigation.

The report also went before the Public Accounts Committee at Stormont before a full hearing by the Department for Culture, Arts and Leisure Committee. The Comptroller and Auditor General presented me with a copy of the report and described the project as the best  example of how not to do something he’d ever encountered.

How is journalism embracing the digital revolution?

It’s a difficult one for a local newspaper. We have to be part of the digital age but how far do you go? What stories do you put online without revealing your hand to your rivals and at the same time not leaving the cupboard bare for the hard copy edition, which is our bread and butter – it’s a fine line.

When the paper goes to print we do tweet our headline stories to give people an idea of what they can expect in that week’s edition of the Newry Reporter.

We’ve a digital edition of the newspaper and our Newry Reporter app is up and running. We’re dipping our toes into video interviews (in sport) for our Facebook page and there are further digital expansion plans that we are working on.

What advice would you give anyone starting out in the profession?

It’s important to build up a portfolio of work. Get to know your local newspaper journalists and editors, and see if they accept submissions.

See if they will have a look at something you’ve done and don’t be afraid to ask for advice.

You also have to have a passion for the job. It’s not glamorous, it’s unsociable hours and journalists aren’t exactly flavour of the month.

What are your main interests outside of work?

I would have been a ‘triathlete’. I took part but the aches and pains caught up with me and now I just cycle with Camlough Cycling Club.

I do sportives, at the minute I’m training for a four-day hill/mountain cycle in Spain in May. Aside from the fitness and health benefits getting out on the bike is also a brilliant way to shower the head.

I also play golf with the Ulster Press Golf Society once or twice a month [during the good weather] – the golf may not be the best but the craic’s good!