The latest annual statistics on children leaving care upon approaching adulthood in Northern Ireland paint a bleak picture of the challenges facing those transitioning to independence, writes David Whelan.

In February 2022, the Northern Ireland Statistics and Research Agency (NISRA) published its annual statistics bulletin on care leavers in Northern Ireland. The bulletin outlines outcomes for care leavers across a range of areas, differentiating between those approaching or turning 18 and those who were 19 across the year from April 2020 to March 2021.

The annual bulletin is not descriptive of the overall outcomes for the hundreds of individuals who leave care upon reaching adulthood in Northern Ireland every year, but the snapshot does provide some insights into the range of challenges associated with time in care.

It is widely recognised that time spent in care has ramifications, including elements of social disadvantage that impinge on a person’s quality of later life. These challenges can be compounded by the transition to independence as individuals reach adulthood. As a result, Health and Social Care Trusts (HSCTs) in Northern Ireland are required by the Children (Leaving Care) Act (Northern Ireland) 2002 to take reasonable steps to maintain contact with care leavers. However, for 2020/21, 5 per cent of individuals had no contact at all, with this figure including a small number not resident in the UK or deceased.

A further 5 per cent had contact once only every six months and 16 per cent had a frequency of contact rate of once every three months.

Of those with whom HSCTs maintained contact, 67 per cent were receiving some form of ongoing support from social services, the vast majority of which was financial and relating to accommodation or education, however 13 per cent of those receiving ongoing care were doing so for mental health issues.

In terms of economic activity, 30 per cent of care leavers aged 19 were not in education, employment, or training (NEET) in 2020/21. Statistics show that 16 per cent remained unemployed, while a further 12 per cent were unemployed due to ill-health or disability.

Collection of data for those aged 16 to 18 varied from those aged 19 across the year, however, there are similar obvious challenges associated with time in care.

Of all care leavers aged 16-18 across the year, 20 per cent had a statement of Special Educational Need. Although not directly comparable, only 5 per cent of all school leavers had a similar statement across the same year, suggesting a disproportionate number of young care leavers have specific educational needs compared with the general population.

After leaving care, only 30 per cent of this cohort were still living with their former foster carers and 13 per cent were living independently. A total of 18 per cent were described as divided between living with friends or family, in custody, or in other accommodation.

Perhaps most strikingly, 33 per cent of care leavers in the year to March 2021 did not have any qualifications upon leaving care. Educational attainment is often an important indicator of future employment prospects and economic performance. Over the year, only 29 per cent of care leavers aged 16 to 18 had achieved five GCSE grades A*-C or higher, this compares to 91 per cent of the school leaver population.

In terms of economic activity, the majority of young people, just over half (55 per cent) were in education or training at the time of leaving care, while 10 per cent were in employment, however, 13 per cent were deemed unemployed and the status of a further 13 per cent was unknown by HSCTs.

While the manner in which statistics are gathered makes an understanding of the broader context of outcomes for those who have experienced care in Northern Ireland difficult, the annual snapshot offers some sense of the additional barriers placed in front of those individuals transitioning to adulthood. 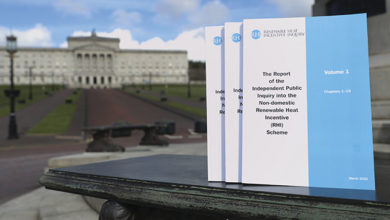 RHI: Only 40 per cent of inquiry recommendations implemented two years on