Victims have waited too long for a law that reflects the reality of domestic abuse, let’s not make them wait any longer, says Victim Support NI’s CEO Geraldine Hanna.

The Domestic Abuse & Family Proceedings Bill is currently undergoing scrutiny by the Justice Committee, before making its way back to the Assembly floor in the Autumn. This Bill has had a longer trajectory than most: earmarked for introduction to the Assembly in February 2017 following intensive efforts by then-Justice Minister Claire Sugden, the Bill was shelved with the collapse of the Executive. The almost-bill would languish for three more years, leaving victims and survivors no closer to legal protection from the coercive, controlling behaviour that pervades domestic violence.

In the intervening years, the shortcomings of our legal system in tackling domestic abuse have been exposed on an international stage, during the UK’s examination by the UN Committee for the Elimination of Discrimination Against Women (CEDAW). Amidst a laundry list of recommendations that pointedly referenced Northern Ireland, CEDAW urged that measures were adopted to protect women from gender-based violence. The Domestic Abuse & Family Proceedings Bill is a significant step towards meeting that obligation. The fact that the Bill will apply not only to women but to all victims is to be welcomed, we at Victim Support NI believe that no victim should be denied legal protection.

The Bill’s main objective is to criminalise coercive, controlling behaviour and psychological harm. It is not a panacea for all legal gaps and shortcomings relating to domestic abuse: comprehensively tackling this ingrained societal issue will necessitate reaching beyond the justice sphere and embracing cross-cutting health, education, housing, socio-economic, equality and immigration solutions.

Nonetheless, Victim Support NI is reassured by Minister Long’s commitment that identified gaps will be addressed in a future Miscellaneous Bill. Outstanding issues like stalking, non-fatal strangulation, and parental alienation, deserve timely consideration to ensure that any legislative changes are effective. We also feel strongly that victims of coercive, controlling behaviour have waited too long already for this law to come into effect.

Accordingly, we have submitted written and oral evidence to the Justice Committee, urging them to facilitate the passage of this Bill at the earliest opportunity for the benefit of victims.

That notwithstanding, the Bill requires some work to make it fit for purpose.

One aspect, the reasonableness defence, has been flagged by numerous organisations as problematic. Victim Support NI acknowledges the rationale for including a reasonableness defence within the legislation. Without such a defence, those caring for a person with conditions such as dementia might find that actions intended to protect are construed as abuse by the law.

That said, the clause as it stands is a blunt instrument, which could create difficulties for any victim with a disability or vulnerability seeking protection from the law. Given that people with disabilities are more than twice as likely to be victims of domestic abuse, and are much less likely to report it, it would be unconscionable if they were denied justice due to a blanket ‘reasonableness’ defence. 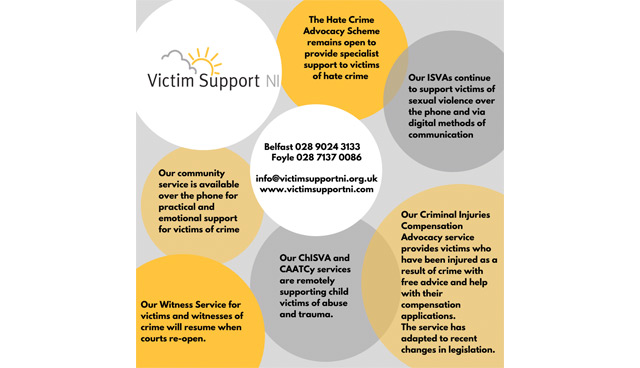 Another concern is the defence being used to cause further harm to victims in the courtroom. There is a risk that anyone with a disability, addiction, or mental health issue, could be painted as unstable or lacking capacity to make their own decisions, with abusive behaviour being ‘for their own good’.

Even worse is the potential for unfettered use of the defence to result in high attrition rates, or victims not reporting in the first place for fear of what they’d have to endure at trial. We have called on the Committee to ensure that appropriate safeguards are in place to prevent the spurious use of this clause. We believe that the true test of this law will be in its application, so we have urged the Committee to ensure that explanatory guidance is included alongside the Bill.

A further area of concern is the child aggravator clause. The motivation behind Clause 8 is noble, it is not uncommon for predatory abusers in their 20s, 30s, or older, to deliberately target young victims of 16 or 17, as their naivete and lack of relationship experience can make them easier to control.

However, the child aggravator in its current form is not only applicable to those predatory abusers, but also the 17-year-old offender who is in a relationship with another young person. In other words, where the offender is a child themselves. While it is indisputable that abuse by someone of any age is unacceptable and should be effectively dealt with, we do not believe it is fair for young offenders to be given enhanced punishment in the same way as older perpetrators who intentionally target and exploit young victims. Surely such an outcome would not reflect the spirit on intent of the law.

It is also important to highlight the essential elements that are missing from this Bill, namely training, awareness-raising, and adequate resourcing. We believe that these elements should be added to the Bill for several reasons.

To convict someone under this law, there must be evidence of a course of conduct that amounts to abuse. This will require not only the collection of multiple strands of evidence, but also an understanding by investigators of what that evidence might look like. For instance, a bunch of flowers left at a person’s doorstep may seem innocuous, indeed a ‘nice gesture’. However, in a certain context, that act may harbour sinister intent, such as that of an abusive ex-partner demonstrating they know where their victim lives. If a responding officer or prosecutor isn’t aware of what abusive behaviour can look like, they may disregard valid complaints and set back the course of justice for that victim.

The same can be said for juries deciding on a case. The fact that domestic abuse goes beyond physical violence remains novel in many quarters of our society, and our juries are made up of those ordinary people. How can we ensure that a case is tried fairly if those involved in decision-making do not possess an understanding of what coercive controlling behaviour looks like, and what behaviours are capable of meeting this threshold?

Victim Support NI believes that victims of crime, including victims of domestic abuse, would be best served by the establishment of an overarching Victims’ Commissioner for Northern Ireland with the appropriate power, resources and independence from government. If such a role followed in the footsteps of the current Victims’ Commissioner for England and Wales, Dame Vera Baird, domestic and sexual violence would no doubt feature prominently in their work, while also ensuring that victims of other crime are not left behind.