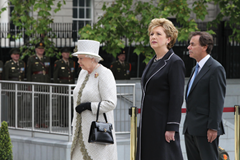 Ireland’s first presidential election in 14 years is essentially a decision on the character and values of the best person to represent the nation, as the post carries minimal political influence.

The last presidential election was held in 1997. Mary McAleese was returned unopposed in 2004 and is now nearing the end of her maximum term. Polling day is scheduled for 27 October, alongside two constitutional referenda.

The President of Ireland (Uachtarán na hÉireann) swears to dedicate his or her abilities “to the service and welfare of the people of Ireland” as opposed to the Republic. A northerner can stand for election, as McAleese demonstrated, but only southerners can vote.

Presidential duties include appointing the Government and judiciary, signing bills and commanding the armed forces. The President can refer Oireachtas bills to the Supreme Court and decide on dissolving the Dáil when a Taoiseach loses its confidence.

There is no single vice-presidency. Instead, any vacancies are filled by a Presidential Commission (the Chief Justice the plus Dáil and Seanad chairmen). A separate Council of State advises the President on his or her powers.

Áras an Uachtaráin was the residence of the royal Lord Lieutenant until 1922, after which a Governor-General represented the Crown. The creation of the presidency in 1938 symbolised Irish independence although George VI remained King of Ireland until 1949. The new position was a “republican version of the Governor-General”, according to John O’Dowd, a constitutional expert at University College Dublin. The first incumbent, Douglas Hyde, was non-partisan but from 1945 to 1990, all presidents were Fianna Fáil veterans.

The new President will mark the Easter Rising centenary in 2016 and will leave office in late 2008, close to two sensitive centenaries: Armistice Day and Sinn Féin’s victory in the 1918 general election.

Mary Robinson broke the mould in four ways: a woman, a liberal, outside the ‘civil war’ parties, and an independent (after refusing to rejoin Labour). The office’s budget was boosted and she gave it global prominence e.g. by becoming the first head of state to visit Somalia during its famine.

‘Building bridges’ has been the major theme of the McAleese presidency, including over 130 official visits to the North and the Queen’s historic visit. McAleese has regularly paid respects to Irish soldiers who served in the British Army. However, she also attracted criticism in 2005 for comparing the past treatment of Northern Catholics to Jews in the Holocaust. Her family was forced out of Belfast by loyalists during the Troubles but, ironically, she and her husband Martin have a good relationship with loyalist paramilitary leaders.

Her quiet diplomacy is admired by those seeking to succeed her and shows that a President has a certain amount of soft power.

To run for President, an Irish citizen must be aged 35 or over and be nominated by either 20 Oireachtas members or four county councils. An incumbent can also nominate himself or herself.

The winner must give up all other offices, to ensure independence, and must not directly criticise the Government. Cearbhall Ó Dálaigh had to resign the presidency in 1976 after a dispute with ministers.

Following David Norris’ withdrawal, there has been widespread demand for another high-profile independent. Gay Byrne will not run. Veteran GAA commentator Mícheál Ó Muircheartaigh was considering his decision at the time of writing.

Political and legal experience, though, gave Robinson and McAleese self-confidence when working with other politicians.

Fine Gael has nominated MEP Gay Mitchell and Labour’s candidate is its party President, Michael D Higgins. Entrepreneurs Mary Davis and Seán Gallagher are running as independents. Fianna Fáil has the numbers to run a candidate; its parliamentary party will make a decision in early September. It is understood that the party fears falling behind Sinn Féin if both parties put up candidates.

A Sinn Féin candidacy is still an outside option and would be a first. Gerry Adams told agendaNi in 2009 that he “never had any, [did not] have any and won’t have any” ambitions for the Áras. With 17 TDs and senators, it would need help from independent TDs or senators, or the councils. Similar hurdles face Dana Rosemary Scallon, who came third in 1997.

Sinn Féin and the SDLP both want to extend presidential voting rights to the North, although unionists are opposed on sovereignty grounds. Alliance is “very cautious” as the move could have “unforeseen consequences” e.g. allowing for northern votes to Dáil Éireann as well.

The proposal is likely to be considered, alongside overseas voting rights, in the Republic’s forthcoming constitutional convention. The UK Government would also be consulted and Conservatives are wary of undermining the union.

Potential compromises could include postal voting and allowing British citizens to participate, as the SDLP has suggested. A seven-year term is long by European standards (only Italy and Ireland have it) so a cut to five years is also on the table.

An all-island presidential poll would be the first contest at that level since the 1920 local elections. Asked whether the President has a view on Northern votes, her spokeswoman told agendaNi: “Such a matter would be decided by the Government or referendum and it would not be appropriate for the President to comment.”

The devout Catholic (aged 59) studied politics at Queen’s University Belfast before a career in accountancy. He has been a Dublin city councillor, TD for Dublin South Central, Europe Minister (1994-1997) and MEP since 2004.

A former PE teacher helping disabled children, Davis (aged 57) has extensive experience in voluntary and community work. She organised the 2003 Special Olympics and now leads the organisation in Europe and Central Asia. The Mayo native sits on Mary McAleese’s Council of State.

The 49-year old businessman was born virtually blind but recovered his sight in childhood through corrective surgery. He co-founded the Smarthomes technology company and is a panellist on RTE’s version of Dragons’ Den. Gallagher was previously a “sporadic” member of Fianna Fáil.

Priorities: Supporting enterprise to rebuild communities hit by the recession.