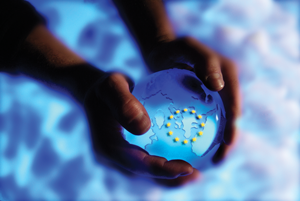 Insularity and caution will damage Europe’s standing in the world, according to diplomats. Peter Cheney considers the view from New Zealand and the USA.

Foreign observers are warning that an inward-looking and risk-averse Europe will fall behind the rest of the world. agendaNi asked American and New Zealand diplomats for their perspective on a continent in crisis.

Vangelis Vitalis is New Zealand’s Ambassador-designate to the EU, and the son of Greek migrants. “The euro zone crisis is transfixing us in Wellington,” he states. However, Vitalis is also troubled by Europe’s changing sense of perspective.

“If I look over Europe now, even in the month that I’ve been here, I’ve been struck by how inward-looking Europe has become and the feedback that I get is that there’s likely to be an intensification of that inward-looking nature of Europe,” he warns.

With more than 50 per cent of the world’s GDP generated in the Asia-Pacific region, he predicts that Europe will lose its global influence if it fails to engage with those economies. Vitalis is keen to pitch New Zealand’s case: a small, agriculturally-based economy diversifying into data services and software. It hedges its bets by negotiating free trade agreements and his goal is a comprehensive agreement with the EU within 2-3 years.

The EU’s external relations are a lesser known but growing part of its work, especially after Catherine Ashton’s appointment as High Representative for Foreign Affairs and Security Policy. Key EU foreign policy decisions are agreed unanimously by all 27 countries but others go through by majority votes.

Ambassadors from 165 countries are accredited to the EU. America’s mission is a growing operation and, after Lisbon, is engaging more with the European Parliament.

A solution to the euro zone crisis is seen as essential to the US recovery. At the EU-US summit in November, Barack Obama warned that a contracting European economy made it “much more difficult for us to create jobs at home”.

The Administration also thinks that US policy on data protection and climate change is misunderstood in Europe.

MEPs criticised American attitudes to privacy when considering the new US-EU agreement on passenger name records. The Patriot Act is still partly in force and the USA has separate data protection laws for different sectors, unlike the single EU Directive. US Attorney-General Eric Holder maintains that that both systems protect privacy “effectively but in our own ways.”

US senators rejected the American Clean Energy and Security Act, which would have established an emissions trading system, in June 2009. The US regards the EU’s decision to include aviation emissions in its system from 1 January 2012 as a ‘tax on airlines’. Instead, it calls for a binding global framework through the International Civil Aviation Organisation.

New Zealand, in contrast, has the only emissions trading system outside the EU and is keen to work on this common ground. It also launched the Global Research Alliance on Agricultural Greenhouse Gas Research at the 2009 Copenhagen conference and wants to see more European researchers and scientists taking part.

The US Ambassador to the EU, William Kennard, has criticised the precautionary principle for holding back innovation in European agriculture. Kennard, a former communications regulator, said that regulators should “decide what is safe based on science” rather than dictating what consumers choose.

New Zealand and the USA are far apart on population (4.4 million compared to 312 million) but both emphasise their shared values with Europe. Other trading partners, such as Saudi Arabia and China, may be good for business but lack democracy. Vitalis concludes that the challenge for the New Zealand-EU relationship is “not to take each other for granted but to turn that all around and make something more out of it.”