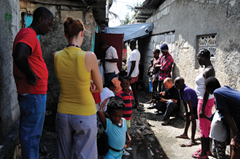 Fermanagh film-maker Michael Brown has just returned from a trip to Haiti, one year after it was hit by a major earthquake. He tells Emma Blee about the “desperate situation” that remains.

“What struck me most was the extent of chaos and devastation that still exists, it felt like the earthquake had happened two weeks ago,” remarked Michael Brown.

In December, he travelled to the country to film a documentary on the lives of children who are living with disabilities in the midst of the disaster.

Although a year has passed since the earthquake struck, Brown said that over a million people are still living in refugee camps that are scattered throughout the rubble of Port-au-Prince. Many bodies still lay buried under tonnes of concrete in the capital.

Brown travelled around these refugee camps and met with locals. One story that stands out in his memory is that of a nine-year-old boy called Rodinson, who was injured when his home collapsed during the earthquake.

“His foot was badly crushed and had to be amputated and Rodinson’s father was killed. With their home destroyed, his mother found shelter for them in the back of a pick-up truck where they lived for six months,” recalled Brown.

Eventually his mother was able to buy a tent in one of the camps that have been erected and that are where they now live. However, the tent is shared by Rodinson, his mother, sister, two brothers, his grandmother and an uncle.

One of the main challenges facing the people of Port-au-Prince is poor cleanliness and hygiene: “People who have undergone major medical surgery often leave hospital to go back to live in the refugee camps, and keeping wounds clean long enough to heal can be very difficult,” commented Brown.

Elections for a new president in Haiti in November caused further problems. These were “highly charged” and the results have been disputed. A second round of voting has now been called for early 2011 but Brown said it was clear that “law and order have broken down in many areas and escalating civil conflict is a looming possibility”.

“It is essential to have strong, clear governance of the country with law and order restored and with an administration that can co-ordinate the rebuilding of the country’s key infrastructures: housing, health and employment,” he argued.

Many emergency relief organisations came into Haiti after the earthquake but have now left. The film-maker commented: “Haiti now needs international support to make the transition from emergency disaster to long-term recovery. Above all, people need to get out of tented refugee camps and back into permanent quality housing.”