Despite a notable narrowing of the gender gap in relation to senior positions in Northern Ireland in the last five years, recent statistics show a male dominance of decision-making positions.

Although not all the statistics relating to 2014 and 2019 review are directly comparable, the snapshot on gender representation in decision-making positions in Northern Ireland illustrates progress in terms of bridging the gender gap in senior positions over the past five years, while also highlighting a need for greater improvement.

A total of 63 per cent of local authority mayors are male in 2019, compared to 69 per cent in 2014. Just 27 per cent of local councillors are female but this is up from the 24 per cent statistic in 2014 (members of the outgoing councils still sitting, as opposed to the shadow councils who also sat that year.)  The number of female MLAs has risen from 20 per cent in 2014 to 33 per cent currently, meaning males continue to make up over two thirds of the Assembly. A small change at MP level means that female representation has risen from 22 per cent to 28 per cent. 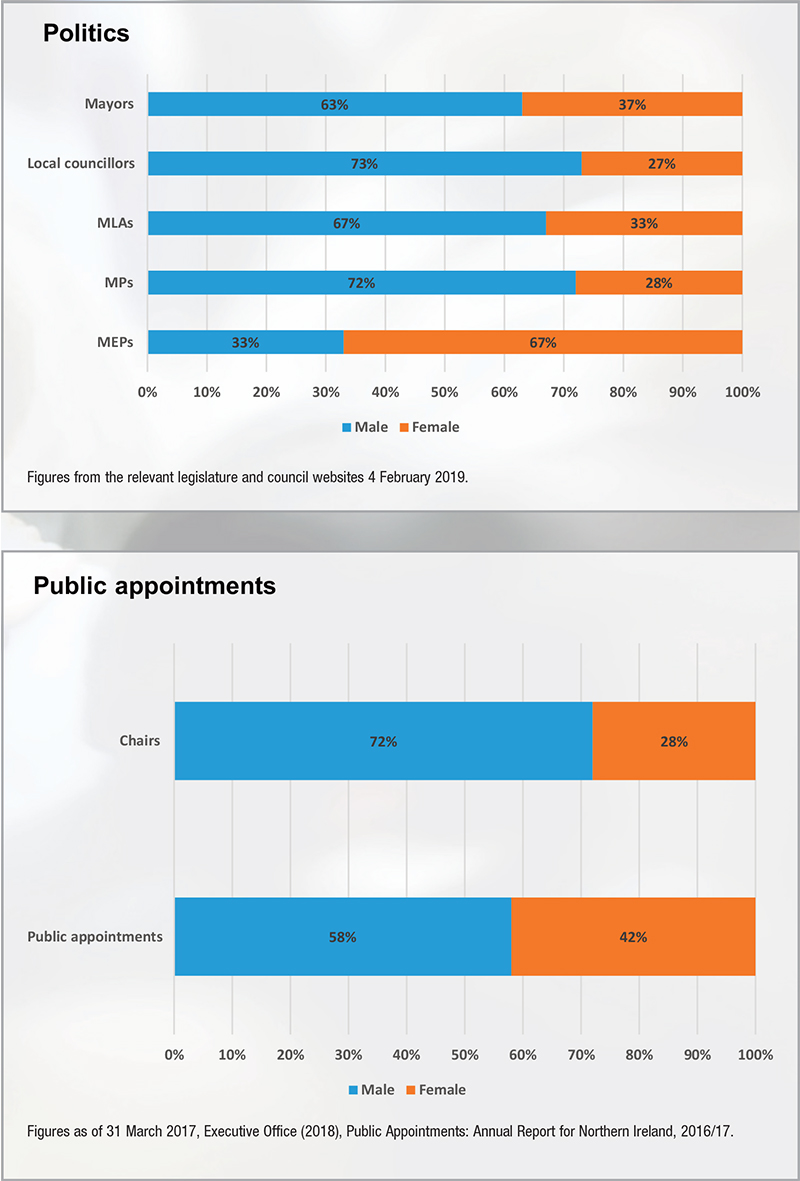 Females representation in public appointments has risen significantly from 2014 to 2019 from 33 per cent to 42 per cent, however, females make up just over a quarter of chairs of public bodies. 28 per cent of public body chairs are now female compared to 18 per cent in 2014.

Males continue to make up the majority of self-employed workers in the labour market (70 per cent) and women continue to make up the majority of part-time workers. The percentage of part time workers who are female (82 per cent) is a slight increase since 2014. In terms of the labour market as a whole, males make up 52 per cent compared to 48 per cent of female representation.

There are no females in the most senior judiciary position in Northern Ireland. Both the Lord Chief Justice and the three Lord Justices of Appeals are all male. At High Court level just 22 per cent of judges are female. While the number of female county court judges is increasing, females still comprise just a third of all positions (33 per cent).

Northern Ireland’s civil service has an equal split of female and males (50 per cent) as a whole but females continue to be under represented in senior positions. The relatively recent appointment of three female Permanent Secretaries means that females are now in one third (33 per cent) of positions which in 2014 were entirely male-dominated. Senior civil servants of grade five and above are still largely held by males but the 38 per cent of females in 2019 has increased from the 33 per cent.

The third sector is the most female dominated area, even in senior positions. 75 per cent of all staff are female, as are 56 per cent of CEOs and 74 per cent of directors. In 2014, females were less than half of CEO positions.

At council level, 27 per cent of council CEOs are female, an increase from the 15 per cent recorded in 2014. Across all employees in local government, the majority are male (58 per cent).