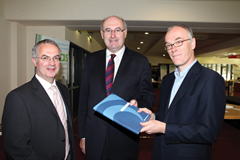 A new InterTradeIreland report shows that regulations from EU directives have little impact on companies who trade across the border.

InterTradeIreland’s report has found that companies are not impacted significantly by environmental regulations. The report, which examined the impact of regulatory burdens arising from several EU environmental directives, said that only the trans-frontier shipment of waste (TFS)

• reporting requirements arising from environmental regulations should be examined;

• a review of requirements and responsibilities for information requests to eliminate overlap;

• the changing of information requirements, particularly for SMEs, including the use of a risk-based approach to target operators performing the highest risk activities in a sector.

Problems with the requirements from the TFS Directive were expressed by industry members. Financial and administrative burdens associated with shipments of waste between North and South “are not commensurate with the potential risks”.

They also interpretations authorities of notification controls for the movements of waste.

Waste companies, the report stated, did not understand why garden and food waste are deemed notifiable waste (amber list) simply because they are not listed within the TFS regulations or the reason why green (non-hazardous) waste has the same financial and administrative burden as a typical hazardous waste. Participants in the consultation argued that “the costs and administrative burdens being placed upon legitimate businesses, who want to operate in compliance with the regulations, could encourage a black market economy.”

The report recommends TFS clinics to simplify the transport of waste and streamline associated costs, a meeting of regulators to streamline the process for cross-border businesses, and transparency in enforcement at a small operator level.

In light of some of the negative publicity surrounding the waste management industry due to the repatriation of illegally dumped waste, InterTradeIreland stated that “the [waste] industry and regulators need to work with the media to raise the profile of the sector and outline the economic and environmental opportunities.”

During the consultation, arc21, a member of the Chartered Institution of Wastes Management (CIWM) in Northern Ireland, was critical of aspects of the status quo. It stated that there are “major barriers to a holistic approach to waste management across the island including, inter alia, the TFS regulations, the UK import and export plan, and the lack of integrated waste management planning.”

CBI members, meanwhile, “did not have any specific issues with differences in environmental legislation in the two jurisdictions.” However the employers’ representative group did find that while the Northern Ireland Environment Agency (NIEA) has limited flexibility due to environmental legislation mainly being framed by the EU, “there is a view that NIEA remains risk averse in their application of regulations with a desire to avoid any criticism or risk of challenge.”

An all-island report on plastic waste has shown that less than a third of plastic waste generated on the island of Ireland in 2009 was recycled, with the same proportion of manufacturing demand for plastic satisfied by recyclate.

waste in 2009 was collected for recycling, mainly abroad. Seventy-one per cent of it went to landfill. Of the plastic recycled from households there were 1.6 billion plastic 500ml soft drinks bottles and 1.1 billion plastic 2l milk bottles.

There are 17,978 people employed in the plastics and polymer sector on the island. In Northern Ireland 67 firms provide 6,147 jobs, while in the Republic 179 firms sustain employment for 11,831 people. The report is aimed at providing business with data on the quantity, the quality, type, origin, destination and end use of plastic waste.